Grupo Carso SAB de CV has once again pushed back the completion date of its 36-inch diameter, 472 MMcf/d Samalayuca-Sasabe pipeline, with startup now projected for September. 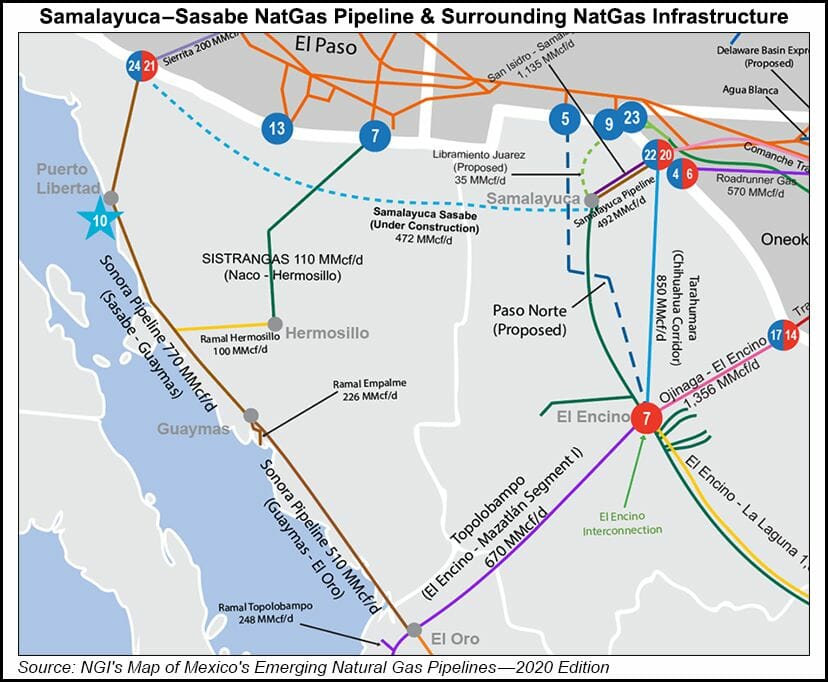 The 403-mile pipeline “is in the very last phase of construction,” CEO Antonio Gómez García said last week during a quarterly earnings call. If everything goes well, “we will finish the construction around June, and the pipeline could be in operation maybe in August, September this year.”

The pipeline, which had already been delayed for two years over a right-of-way dispute, had been expected to start up by the end of March. It was one of seven pipelines involved in contract renegotiations last year with anchor customer Comision Federal de Electricidad (CFE), Mexico’s state-owned power company.

Grupo Carso’s owner, billionaire Carlos Slim, was seen as key to brokering an agreement with the Mexican government that helped bring about new contracts and which ended the dispute in August.

The Samalayuca-Sasabe pipeline is seen as important to relieving some of the pent-up pressure on natural gas prices in West Texas, where takeaway capacity is insufficient to deal with booming associated gas production principally in the Permian Basin.

While the pipeline runs from east to west in northern Mexico and will not lead to additional imports of U.S. gas, Genscape Inc. analysts have said the delay prolongs about 0.25 Bcf/d of relief for the Permian, arguing that the pipeline “provides an alternative, cheaper, more direct route for Permian molecules to flow to northwestern Mexican markets.”

West Texas gas prices meanwhile continue to take a beating. They saw steep discounts across the board on Monday, recalling the unprecedented low prices Permian producers endured last spring. Prices at Waha plummeted 85.5 cents on Monday to average minus 66.5 cents.

Energy expert Eduardo Prud’homme told NGI’s Mexico GPI that the Samalayuca-Sasabe pipeline delay won’t however have a serious impact on the operation of the Mexican national pipeline system.

“The reasoning of this pipeline was getting Waha gas to supply the Pacific Coast in a more direct way.” But, he says, natural gas demand has been limited in the area to CFE power plants and hasn’t budged.

That could of course change quickly if the two planned liquified natural gas export plants for the area, Energía Costa Azul and Puerto Libertad, are developed. Final investment decisions on both are expected soon.

Also complicating gas supply on Mexico’s western shores is the stalled 510 MMcf/d Guaymas-El Oro natural gas pipeline, which has been inactive since August 2017 after members of the Loma de Bácum faction of the indigenous Yaqui tribe removed a section of the pipe in protest of its construction.

One piece of good news for Permian producers is that the final segment of the Wahalajara system, the 0.9 Bcf/d Villa de Reyes-Aguascalientes-Guadalajara pipeline, is to be complete by the end of the month, a spokesperson for developer Fermaca told NGI’s Mexico GPI.

In December, the 453-kilometer (281-mile), 1.3 Bcf/d La Laguna-Aguascalientes pipeline, the first part of the system, began commercial operation. When the system is fully functional, it would move gas from Waha to Mexico’s industrial heart of Guadalajara.

Natural gas exports to Mexico grew by 10.2% to 1.38 Tcf, or 5.1 Bcf/d, in the first nine months of last year, according to the U.S. Department of Energy. Genscape analysts had predicted that the start of the Wahalajara system could increase the flows to about 5.7 Bcf/d.