Another week of growth in the oil patch lifted the U.S. rig count three units to 323 for the week ending Friday (Dec. 4), according to the latest figures published by oilfield services provider Baker Hughes Co. (BKR). 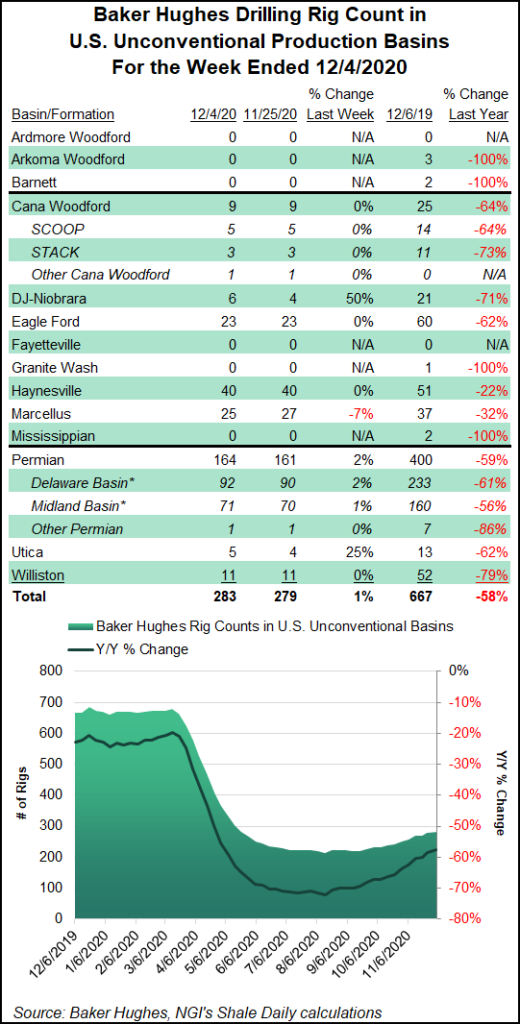 The United States saw a net increase of five oil-directed rigs for the week, offsetting a decline of two natural gas-directed units. The combined U.S. tally ended the period nearly 500 rigs shy of the 799 active units in the year-ago period, according to the BKR numbers, which are based on data provided in part by Enverus Drillinginfo.

Over the past three months, the U.S. count has risen by nearly 70 rigs, and oil-directed drilling has accounted for nearly all of that increase. The natural gas rig count has seen relatively little growth during that time frame. U.S. natural gas rigs stood at 72 in early September, versus 75 during the current week, BKR data show.

Land drilling increased by two in the United States for the week, while one rig was added in the Gulf of Mexico. Horizontal rigs increased by six, along with the addition of one vertical unit. Those gains were partially offset by a net decrease of four directional rigs.

The overall Canadian rig count was flat week/week, with a two-rig increase in oil rigs offsetting a two-rig decrease in natural gas rigs. The Canadian count finished the period 36 units behind its year-ago total of 138.

The combined North American rig count ended the week at 425, versus 937 in the year-ago period.

Among major plays, the Permian Basin led the way during the week, picking up three rigs to grow its total to 164, versus 400 a year ago. The Denver-Julesburg/Niobrara formation added two rigs for the week, while the Utica Shale added one. The Marcellus Shale posted a net decrease of two rigs week/week.

Broken down by state, BKR recorded a three-rig decline in Pennsylvania, with California and Wyoming each dropping one rig from their respective totals. Texas, Colorado and West Virginia each saw a net increase of two rigs for the week, while Louisiana and New Mexico each added one.

The Organization of the Petroleum Exporting Countries and its allies, aka OPEC-plus, earlier in the week agreed to boost production beginning in January by 500,000 b/d, ending a multi-day standoff over the timing and volume of an output increase because of concerns that new coronavirus outbreaks could dampen demand into early 2021.

Members also agreed to review output every month between January and April, with further monthly adjustments during that period not to exceed 500,000 b/d.

This comes as the International Energy Agency (IEA) is forecasting a 10% year/year decline in global energy consumption in the transportation sector in 2020, including an 11% drop in oil consumption.