After more than 60 years as a net energy importer, the United States is on track to become a net energy exporter next year, thanks in large part to continued growth in natural gas and petroleum exports, fueled by growing production from unconventional plays, according to a series of long-term projections released Thursday by the Energy Information Administration (EIA). 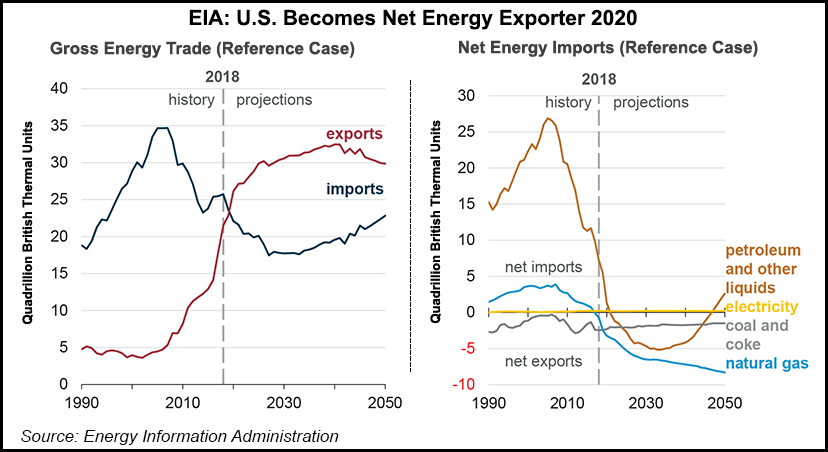 According to both the reference case and all alternative cases in EIA’s Annual Energy Outlook 2019 (AEO2019), the United States becomes a net energy exporter by 2020 and remains so through at least 2050, the end of the projection period. In last year’s AEO, EIA had projected the United States would achieve that goal by 2022.

Large increases in natural gas, natural gas plant liquids (NGPL) and crude oil production, coupled with slow growth in domestic energy consumption, will tip the scales to net exports for the first time since 1953. Natural gas and NGPLs will have the highest production growth, with NGPLs accounting for almost one-third of cumulative U.S. liquids production during the project period, EIA said.

The United States became a net exporter of natural gas in 2017 for the first time since 1958, as increasing shipments of liquefied natural gas (LNG) to world markets and pipeline deliveries to Mexico exceeded imports, and continued to export more gas than it imported last year. In EIA’s reference case, U.S. natural gas trade, including shipments by pipeline from and to Canada and to Mexico as well as exports of liquefied natural gas (LNG), will be increasingly dominated by LNG exports to more distant destinations, EIA said.

Natural gas experiences the largest production increase of any domestic fossil fuel over the course of the projection period in all cases, driven by shale gas and tight oil resources. In the reference case, gas production increases 7% per year through 2020 and then slows to less than 1% per year as growth in domestic consumption and demand for exports slows. Still, post-2020 production grows at a higher rate than consumption in most cases.

Natural gas prices remain comparatively low during the project period, EIA said, leading to increased consumption across end-user sectors and increased LNG exports. In the reference case, growing demand leads to increasing Henry Hub spot prices, though still lower than $4.00/MMBtu through 2035 and lower than $5.00 through 2050.

“Technological advancements and improvements in industry practices lower production costs in the reference case and increase the volume of oil and natural gas recovery per well,” EIA said. “These advancements have a significant cumulative effect in plays that extend over wide areas and that have large undeveloped resources (Marcellus, Utica, and Haynesville).”

In a Drilling Productivity Report released Tuesday, EIA said month-to-month increases in natural gas and oil production from the seven most prolific U.S. onshore unconventional plays will continue in February, pushing that upward trend into a third year. EIA began reporting consecutive month-to-month increases out of the plays beginning in January 2017.

In all AEO2019 cases, onshore production of natural gas from sources other than tight oil and shale gas declines through 2050 due to unfavorable economics, and offshore gas production remains nearly flat.

EIA’s annual AEO reports do not include predictions of what will happen, but rather modeled projections of what may happen given certain assumptions and methodologies. AEO2019 includes a reference case representing EIA’s best assessment of how U.S. and world energy markets will operated through 2050, and six side cases that show the effect that changing important model assumptions have on the projections.