In a liquidity-boosting move, Goodrich Petroleum Corp. is selling Eagle Ford Shale proved reserves and leasehold in LaSalle and Frio counties in Texas for $118 million while retaining some acreage for potential development or sale later. The move was not cheered by analysts or investors. 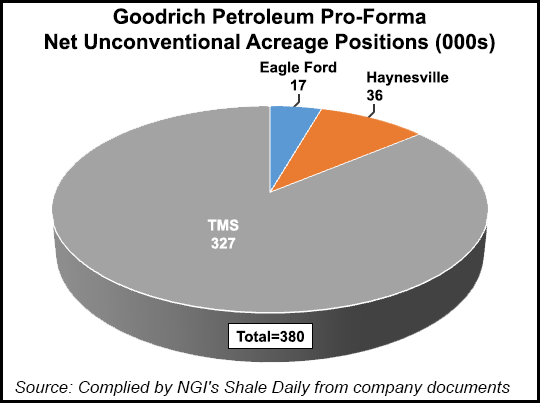 The deal has an effective date of July 1, 2015 with closing expected by Sept. 4. The buyer was not disclosed. Goodrich is keeping about 58% (17,000 net acres) of its undeveloped leasehold in the play for future development or sale. The asset being sold produced an average of 2,850 boe/d (about 75% oil) during the first quarter.

Analysts at Tudor, Pickering, Holt & Co. said the sale price appears to be tagged at the value of the producing properties “with little upside for undeveloped acreage.”

Proceeds, expected to be $50-60 million, will be used to pay off Goodrich’s revolving credit facility with the remainder retained as cash.

Wells Fargo Securities analyst Gordon Douthat said in a note Monday the sale price is $11.35/boe below current trading levels of $19.80/boe. “Net-net, [the] transaction is dilutive from a valuation standpoint, unclear from a liquidity standpoint, and leaves the company more of a Tuscaloosa Marine Shale [TMS] pure-play — a higher risk value proposition in the face of uncertain commodity tape, and we think the stock remains under pressure.”

“The monetization of our proved reserves and associated acreage from our drilling efforts to date greatly improves our liquidity while maintaining a position in the Eagle Ford for future development or sale,” said Goodrich President Robert Turnham. “Acreage retention was an important aspect of this transaction for us as it allows for additional future value creation from the asset in what we believe will be an improved oil price environment. The ability to pay off our bank debt and book the difference in cash in this difficult commodity cycle is an obvious benefit of the transaction as well.

“We continue to drive our well costs lower yet will remain conservative with our activity level, as we reiterate our full year capital expenditure budget of approximately $100 million, with sharply reduced capital expenditures in the last three quarters of the year.”

At the end of April, CEO Gil Goodrich talked up progress the company was making in the TMS; meanwhile, it was issuing notes and shares to bolster the balance sheet (see Shale Daily, March 2). A TMS joint venture or sale of Eagle Ford assets were being contemplated at the time, but the CEO said the company was holding back and awaiting an oil price recovery.