The continued strong production and favorable breakeven prices for North Dakota’s Bakken Shale play are concentrated in four counties where the vast majority of the state’s greatly reduced number of drilling rigs are still operating, the latest county-by-county statistics show. 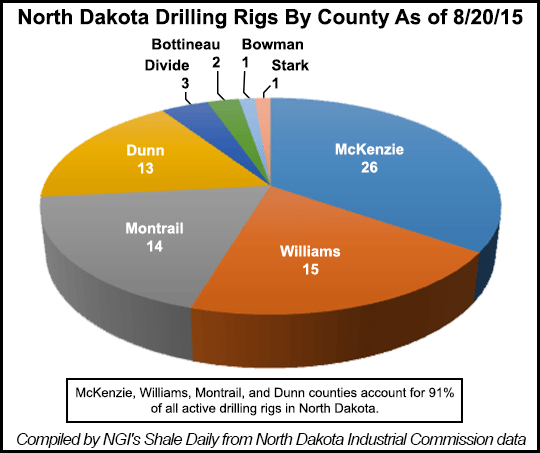 Out of 14 counties in which oil/gas production is ongoing, the vast majority of the production comes from Dunn, McKenzie, Mountrail and Williams counties, all of which are enjoying the lowest breakeven prices available in today’s globally depressed commodity prices, the state Department of Mineral Resources (DMR) reported earlier this week.

McKenzie County has more than one-third of the rigs still operating in the Bakken (26) and a breakeven price of $27/bbl, compared to a $29/bbl breakeven price and 58 active rigs in January. “The breakevens are so low in McKenzie because a typical well has an initial production rate [IP] of more than 3,000 b/d, and they are also high gas producers,” said DMR Director Lynn Helms.

The combination of high IP rates and “a very robust” gas revenue stream keeps the economics in McKenzie favorable for continued production, he said. “That drives some of those breakeven costs way down.”

The other factor is efficiency gains by the operators in driving down well costs, which Helms said has had an “enormous” impact on keeping North Dakota oil production at around 1.2 million b/d. “Well costs are down about 22% and they are continuing to drop,” he said, adding that operators have found ways to use fewer trucks; they can cover more wells with walking rigs; and rig counts could drop into the 50s with all of the efficiencies. The current count is 74 rigs operating.

DMR officials said they developed the county-by-county breakeven prices by tracking economic data submitted by operators during monthly hearings. “We have an economic data set that includes monthly well operating costs, yearly drilling costs and IP rates for each county for the past 12 months and type curves to model average well production by county,” a DMR spokesperson said.

Using this data, DMR calculates the county breakeven prices at a 10% rate of return for the operators. Last November, there were 188 rigs operating in the state, and 169 of them were in one of the four big producing counties with McKenzie heading the list with 72. Breakeven prices were a little higher, ranging from $29/bbl in Dunn to $45/bbl in Mountrail.