The Department of Interior’s (DOI) Bureau of Ocean Energy Management (BOEM) has identified two sites in the Gulf of Mexico (GOM) that could support offshore wind development in an area that has long been one of the major natural gas and oil breadbaskets. 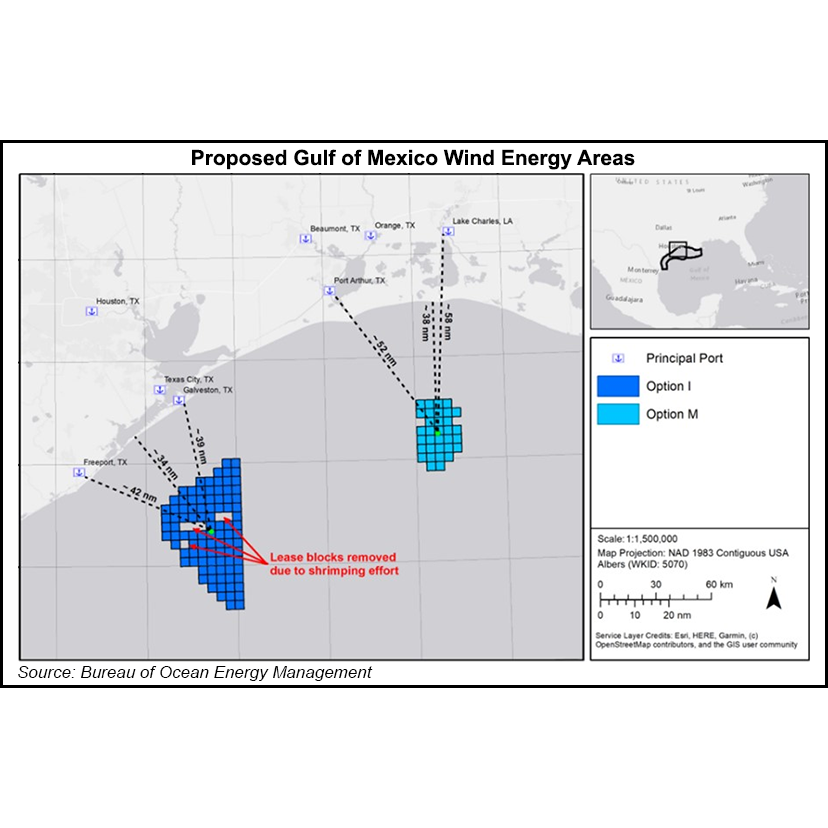 The largest of the two proposed wind energy areas (WEA) spans 546,645 acres and is 24 nautical miles (nm) off the coast of Galveston, TX. If developed, the WEA could produce enough power for about 2.3 million homes, according to BOEM.

The two potential WEAs are the latest in a series of moves by the Biden administration as it aims to bring at least 30 GW of offshore wind capacity onboard by 2030. The wind energy target is part of one of President Biden’s first executive orders in January of 2021 that called for a government-wide approach to tackle the climate crisis.

“President Biden has called on us to address the climate crisis,” said DOI Secretary Deb Haaland. “The promise of renewable energy is undeniable, as is the momentum for a clean energy transition.”

The two initial WEAs may not be the only proposed lease areas within the GOM moving forward, as BOEM said it has also released a draft environmental assessment (EA) for a 30 million acre call area. BOEM plans to hold public meetings on the draft EA in mid-August.

“BOEM used the most current scientific data to analyze 30 million acres in the call area to find the best spaces for wind energy development,” said BOEM Director Amanda Lefton. “We are invested in working in partnership with states and communities to find areas that avoid or minimize conflicts with other ocean uses and marine life in the Gulf of Mexico.”

According to BOEM, Gulf Coast States comprise about 32% of the shallow-water offshore wind potential in the United States.

The announcement came less than a month after the DOI issued a five-year proposed program for a maximum of 11 offshore oil and gas lease sales beginning in 2023.

In 2021, the GOM supplied 15% of all U.S. oil production, as well as 2% of natural gas output, according to the Energy Information Administration.

As the DOI revealed its next steps for wind in the GOM, President Biden paid a visit to Brayton Point Power Station, a retired coal-fired power plant in Somerset, MA that will now serve as an offshore wind manufacturing facility.

Milan, Italy-based Prysmian SpA is set to convert the facility and produce submarine inter-array and export cables, which will be required to connect offshore wind farms to mainland power grids.

The new Somerset plan will also serve as a research facility for high-voltage lab testing, according to Prysmian.

Prysmian is also working to connect the 2.6 GW Coastal Virginia Offshore Wind project to the main grid, as well as for the inter-array cables for the 2.1 GW Empire Wind project, a joint project between supermajors BP plc and Equinor ASA in the New York Bight.

In addition, the White House also announced last week it is spurring the DOI to build out offshore wind along the coasts of Florida, Georgia, North Carolina and South Carolina.

To date, only North Carolina has ongoing projects along its shores. In May, TotalEnergies Renewables USA LLC bid $160 million, winning one lease area in the Carolina Long Bay. Duke Energy Renewables Wind LLC also won a lease area with a bid of $155 million.

The DOI said that by 2025, it plans to hold up to five additional offshore wind lease sales and complete reviews for more than 16 offshore wind projects that could bring about 22 GW of wind capacity online.