General Motors on Thursday set a goal to become carbon neutral by 2040, with a vision of an all-electric future and aspirations to eliminate tailpipe emissions from new light-duty vehicles by 2035. 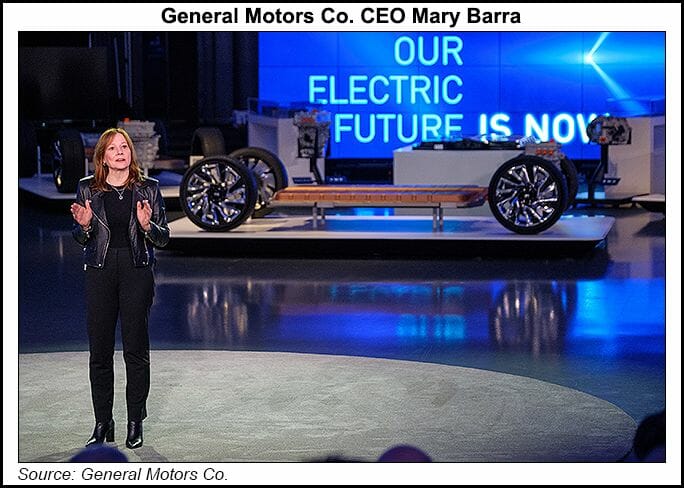 The goal is to offer 30 all-electric models globally by mid-decade, with 40% of the U.S. models battery electric by the end of 2025. The automotive giant, better known as GM, sells vehicles worldwide under Buick, Cadillac, Chevrolet and GMC brands, as well as the Baojun and Wuling brands. GM also signed the “Business Ambition Pledge for 1.5 C,” a call to action to lower emissions by a global coalition of United Nations agencies, business and industry leaders.

“General Motors is joining governments and companies around the globe working to establish a safer, greener and better world,” said CEO Mary Barra. “We encourage others to follow suit and make a significant impact on our industry and on the economy as a whole.”

In addition to the carbon goals, GM has worked with the Environmental Defense Fund (EDF) to develop a shared vision of an “all-electric future.” GM is planning zero-emissions vehicles “across a range of price points.”

Plans are to work with stakeholders, including EDF, to build out the “necessary charging infrastructure and promote consumer acceptance while maintaining high quality jobs, which will all be needed to meet these ambitious goals,” GM said.

“With this extraordinary step forward, GM is making it crystal clear that taking action to eliminate pollution from all new light-duty vehicles by 2035 is an essential element of any automaker’s business plan,” said EDF President Fred Krupp.

“EDF and GM have had some important differences in the past, but this is a new day in America — one where serious collaboration to achieve transportation electrification, science-based climate progress and equitably shared economic opportunity can move our nation forward.”

GM noted that the use of its products accounts for 75% of carbon emissions related to the new commitment.

Around $27 billion is to be budgeted for electric and autonomous vehicles in the next five years, up from $20 billion planned before the onset of the Covid-19 pandemic. The investments include continued development of GM’s Ultium battery technology and updating facilities that include Factory ZERO in Michigan and Spring Hill Manufacturing in Tennessee to build electric vehicles (EV) from globally sourced parts. In addition, it is looking to invest in new sites including Ultium Cells LLC in Ohio, as well as manufacturing and jobs in the fields of science, technology, engineering and math, or STEM.

“More than half of GM’s capital spending and product development team will be devoted to electric and electric-autonomous vehicle programs,” management said. “And in the coming years, GM plans to offer an electric vehicle for every customer, from crossovers and sport utility vehicles to trucks and sedans.

GM also plans to continue to improve the fuel efficiency of its traditional internal combustion vehicles according to regional fuel economy and greenhouse gas regulations.

To address emissions from internal operations, GM is looking to source 100% renewable energy to power its U.S. sites by 2030 and the global sites by 2035, representing a five-year acceleration of the previously announced global goal.

GM said it already has begun to reduce the impact associated with its supply chain while supporting grids and utilities to power the EVs with renewable energy.

In September, California Gov. Gavin Newsom set a goal by 2035 to require all new in-state cars and passenger truck sales to be zero-emission.