Brent crude oil prices are set to average $75/bbl in 2022, up from $71 in 2021, as the world is on track to increase its consumption of liquid fuels over the next two years, according to updated projections from the Energy Information Administration (EIA). 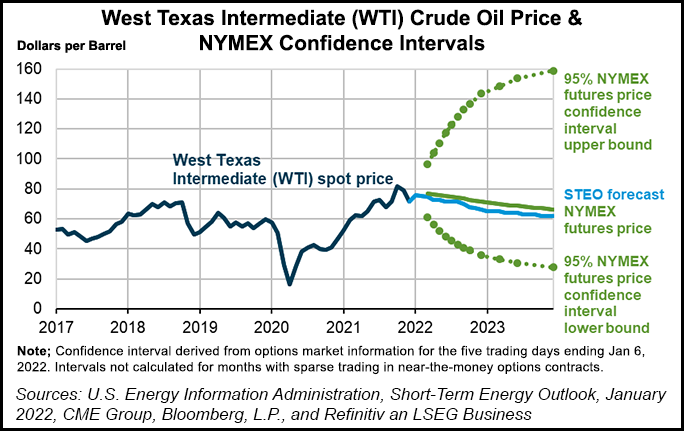 The world consumed 96.9 million b/d on average in 2021, a 5.0 million b/d year/year increase following the impacts of the Covid-19 pandemic in 2020, EIA said in its latest Short-Term Energy Outlook (STEO), published Tuesday. Consumption is poised to grow 3.6 million b/d this year and another 1.8 million b/d in 2023, the agency said.

While Brent prices are expected to rise in 2022, researchers said they expect the global crude benchmark to soften to $68 in 2023.

Production and inventories both rise in the latest STEO projections. Global liquid fuels inventories declined by 1.4 million b/d on average in 2021, but stocks are projected to climb by 0.5 million b/d this year and by 0.6 million b/d in 2023, EIA said.

As for natural gas projections out to 2023, EIA in its latest STEO laid out a vision of rising natural gas production and exports alongside moderating U.S. prices.

Natural gas spot prices at Henry Hub averaged $3.91/MMBtu for 2021, the agency said. This year and next should bring slightly lower pricing for the national benchmark, with a forecast average price of $3.79 for 2022 and $3.63 for 2023, the agency said.

Domestic dry natural gas production is also set to rise this year and next after growing 2.0 Bcf/d year/year to 93.5 Bcf/d on average in 2021. For full-year 2022, EIA forecast 96.0 Bcf/d of production on average; output would then climb to 97.6 Bcf/d next year.

The milder temperatures resulted in a lighter-than-average draw on U.S. storage inventories in late 2021, allowing stockpiles to eclipse the five-year average. December brought a net 338 Bcf withdrawal, 200 Bcf lighter than the prior five-year average, according to EIA.

“Our forecast for the natural gas share as a generation fuel declines primarily as a result of increased generation from new renewable energy generating capacity,” researchers said. “Coal’s average generation share rose to 23% in 2021 as a result of higher natural gas prices, but we expect it to decline slightly over the next two years, averaging near 22% in 2022 and 2023.”