Global offshore oil production, including lease condensate and hydrocarbon natural gas liquids, last year reached its highest level in 16 years and accounted for almost 30% of worldwide output, with the United States one of the leaders, according to the U.S. Energy Information Administration (EIA). 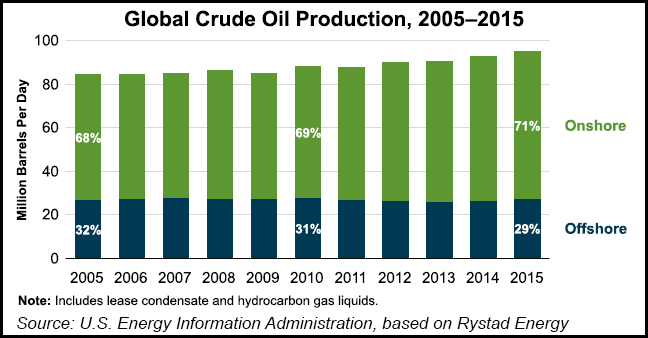 Offshore production increased in 2014 and 2015, reversing consecutive annual declines from 2010 to 2013. However, EIA noted that production from onshore tight oil plays has increased faster in the last few years and now accounts for an increasing amount of total global output.

“More than 27 million bbl of oil was produced offshore in 2015 from more than 50 different countries,” EIA said in research overseen by Matthew Manning. “Global oil production is expected to remain high in 2016, as many oil-producing nations continue to increase production.”

Output is concentrated in a handful of countries. Last year five alone provided 43% of total offshore production, and were in order: Saudi Arabia, Brazil, Mexico, Norway and the United States.

Most U.S. offshore production is in shallow waters, “which are cheaper and less technically challenging, but there has also been a move toward deepwater projects,” EIA said.

By contrast, U.S. onshore production is expected to fall by 0.8 million b/d in 2016 and by an additional 0.3 million b/d in 2017, said federal researchers.”Exploratory drilling in deeper water is more costly and complex for companies, but technology advancements and the exhaustion of shallower prospects have led companies to explore increasingly deeper waters, particularly in Brazil and in the Gulf of Mexico.

In Mexico, the third largest offshore producer, the country “has seen increasingly smaller yields from offshore assets, with production falling by 31% from 2005 to 2015,” researchers said. “Mexico, however, still produced nearly 2 million b/d in 2015, accounting for 7% of global offshore production.”

The leading offshore producer, Saudi Arabia, is responsible for 13% of the world’s total offshore production, while Brazil at No. 2 grew offshore output by 58% from 2005 to 2015 as operators zero in on deepwater pre-salt projects.

In a recent note to clients, Evercore ISI analyst James West said rising crude oil prices could help relieve some of pressure on the offshore markets, which have been hurt harder in the downturn as they are more expensive to develop.

“Operators are slashing new production volumes to less than 25% of the average volumes sanctioned from 2011-2014,” as total capital expenditures decline to “the second lowest level in 20 years.”

However, Douglas-Westwood recently estimated that deepwater development costs have fallen by an average of 40% over the past four years, and the downturn in the oilfield services sector may have bottomed (see Shale Daily, Oct. 3). Rystad analysts estimate that the average offshore breakeven price has fallen to $50/bbl from $70/bbl because of improved drilling efficiency, simpler field concepts and lower supplier costs, West noted.

“We expect a majority of the projects we are tracking…to get shifted to the right, but we also expect to hear encouraging updates on several of these projects throughout 3Q2016 earnings season and into the end of the year,” West said.