Offshore drilling, one of the most beleaguered oil and gas sectors since booming onshore production took hold, is on the cusp of a recovery, Transocean Ltd. management said Tuesday in announcing a $2.7 billion deal to acquire a competitor.

The deal came the same day that Houston-based Talos Energy Inc. said it had completed its acquisition of Whistler Energy II LLC, giving it 100% working interest in a Central Gulf of Mexico deepwater field. Talos acquired Green Canyon (GC) block 18, GC block 60 and Ewing Bank block 988, which together cover 16,494 acres. Included is a fixed production platform on GC block 18 in about 750 feet of water.

“The strategic benefit of this acquisition goes beyond the current producing leases,” said Talos management. “Talos had already licensed recent vintage wide azimuth seismic data in the area, which will be reprocessed to assist in the remapping of the producing reservoirs and potentially generate additional drilling prospects.”

Additionally, in the federal GOM Lease Sale 251 held in August, Talos was high bidder on leases containing at least three drilling prospects that could be tied back to the GC 18 production facility.

What could be a welcoming sign of longer term recovery was the transaction by Swiss-based Transocean, the world’s largest drilling contractor, which agreed to a cash-and-stock deal to buy Ocean Rig UDW Inc. The view is to build the ultra-deep drillship fleet ahead of an expected market recovery in 2019, said Transocean CEO Jeremy Thigpen.

“The combination of constructive and stable oil prices over the last several quarters, streamlined offshore project costs, and undeniable reserve replacement challenges has driven a material increase in offshore contracting activity,” he said. Ocean Rig’s fleet would augment Transocean’s, “and better position us to capitalize on what, we believe, is an imminent recovery in the ultra-deepwater market.”

With its takeover of Ocean Rig, headquartered in Greece, Transocean would add nine drillships and two harsh-environment semisubmersibles to its fleet. Ocean Rig also has two drillships under construction due for delivery in 2020. All together, the transaction would increase Transocean’s fleet to 57. The deal follows its $1.2 billion deal to take over Songa Offshore in January.

“With this unparalleled fleet, the offshore drilling industry’s largest and most profitable backlog totaling $12.5 billion and approximately $3.7 billion in liquidity, we are well equipped for the market recovery,” Thigpen said.

A recovery couldn’t come soon enough. Although discoveries have been steady, the plethora of output from North America’s oil and gas fields, as well as the market downcycle beginning in late 2014, stripped offshore operators of any leverage — or pricing power.

However, the global ultra-deepwater market appears to be on the verge of a…recovery,” said Thigpen. “While the precise timing and trajectory of that recovery is still materializing, all of the data points clearly suggest that we are poised to experience an increase in demand in the ultra-deepwater market.”

Brent oil prices have “remained steadily above $70/bbl for most of the year,” while Transocean’s customers “continued to account offshore project costs in the $40/bbl range, if not lower. And it is well documented that they are facing reserve replacement challenges that cannot be addressed exclusively onshore.”

“Perhaps more importantly, in recent quarters, we have witnessed a material increase in offshore contracting activity. And based on our frequent and direct conversations with our customers, we know that there are multiple ultra-deepwater projects on the horizon for development and exploration across our customer base and in every major ultra-deepwater basin around the world.”

During a conference call to discuss the deal, Thigpen predicted an “active pickup in terms of contract awards toward the end of this year” as budgets are finalized for 2019. “But I think the vast majority you’ll see will probably start up in early ’19 and move through ’19 and into ’20 when you really start to see the contract awards, which should lead to different dayrate appreciation as we move through next year.”

“I think our customers recognized that the dayrates today are very favorable to them,” Thigpen said. “And we have more and more customers that are approaching us about longer terms than they have over the course of the last three years. So that’s another signal that they have programs that are coming up. They want to secure the highest quality, most efficient asset, and they want to do so in today’s dayrates.”

The recent dealmaking may point to a recovery, particularly for deepwater projects as more cost efficiencies kick in offshore and there are consistently higher oil prices, according to IHS Markit.

Using data from its Petrodata RigPoint database, researchers said global demand for jack-ups and floating rigs should increase by about 13% between 2018 and 2020 as the offshore market slowly emerges from its prolonged downturn.

Worldwide global offshore rig demand is forecast to average 521 units in 2020, which would exceed the average of 453 units expected through 2018. Demand figures include seasonal fluctuations and regional trends.

“Broadly speaking, much of this increase in global demand can be attributed to the price of oil being sustained at a higher level than when the downturn was in full swing,” said IHS Markit’s Justin Smith, offshore rig analyst and an author of the rig forecast. “In addition, costs associated with the offshore industry have been slashed in recent years. This has led operators to reconsider exploration, appraisal, and development programs that were not economically viable while the market was bottoming out.”

While the demand for jack-ups, which work in shallow water, should improve, the uptick primarily is forecast to be driven by floating rigs, specifically semisubmersibles and drillships, as operators step up activity in deepwater areas around the globe.

The U.S. Gulf of Mexico “has made a considerable rebound” from its lowest point of the downturn of four contracted jack-up units in October 2016, according to Smith. This year, the U.S. GOM jack-up sector is expected to average about nine units, increasing to 11 by 2020, with potentially more on top of that, if operators undertake additional drilling programs.

In the floating rig market, average annual semisubmersible rig demand is forecast to increase by more than 25% in the short-term to 89 units in 2020 from an average of 71 units this year.

“Fairly significant contributions” to the semisubmersible demand are coming not only from Europe, but from North and South America and from the Asia Pacific market, Smith said.

Another big uptick is anticipated for the drillships in the floating rig market, with demand in 2020 likely to average 79 units, marking a more than 27% increase from the average demand of 62 units for 2018.

“North and South America will be responsible for most of this growth, but for different reasons,” Smith said. “In North America, the increase is mostly attributable to operators being reinvigorated to invest in development programs, while South America is benefiting from ExxonMobil’s exploration successes in Guyana and an influx of new operators in Brazil’s pre-salt areas.”

Deepwater rigs, defined by IHS Markit as units that can operate in more than 3,000 feet of water, should experience the most improvement, with a number of longer-term programs set to begin in 2019 and to run throughout 2020 and beyond.

“While fewer rig contracts have been signed during the last several years, we know that operators are making more plans for the future, and that growth is indicated in our forecast,” Smith said. “Once companies release their 2019 budgets, we expect greater clarity as to how their leaders perceive the long-term health of the offshore market.

“Even without seeing their budgets yet, it is understandable that operators would want to take advantage of current cost reductions, which is being borne out as the number of tenders in the market for rigs has grown significantly this year.”

Marketed utilization also is up ito nearly 74% from around 69%. However, it would need to be closer to 85% before contractors begin pushing significantly higher dayrates, Smith said.

“As available rig time for 2019 and 2020 begins to diminish, we expect operators that have not yet secured their rig slots will follow suit more rapidly so as to avoid paying higher day rates later in the market’s recovery, when rig availability is tighter,” Smith said.

“Additionally, while contracts during the downturn tended to be for shorter terms, it is likely that oil companies will endeavor to lock in rigs for extended terms to secure units at lower rates for as long as possible.” 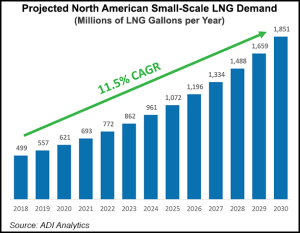