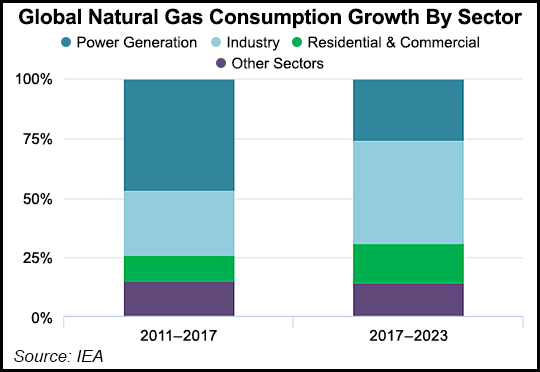 Major changes are also evident on the supply side, with the United States leading gas production growth worldwide to 2023, thanks to the onshore revolution. Most new domestic supplies will be geared to export markets as liquefied natural gas (LNG) or through pipelines. The development of destination-free and gas-indexed U.S. LNG exports is expected to provide additional flexibility to the expanding global waterborne traded market.

“In the next five years, global gas markets are being reshaped by three major structural shifts,” said Executive Director Fatih Birol. “China is set to become the world’s largest gas importer within two-to-three years, U.S. production and exports will rise dramatically, strongly and industry is replacing power generation as the leading growth sector.

“While gas has a bright future, the industry faces tough challenges. These include the need for gas prices to remain affordable relative to other fuels in emerging markets and for industry to curb methane leaks along the value chain.”

Chinese gas demand is forecast to grow by 60 % between 2017-2023, underpinned by policies aimed at reducing local air pollution by switching from coal to gas. China alone accounts for 37% of the growth in global demand in the next five years and becomes the largest natural gas importer by 2019, overtaking Japan.

The IEA also is forecasting strong growth in gas use in other parts of Asia, including in South and Southeast Asia, driven by strong economic growth and efforts to improve air quality.

For end-use sectors, industry is forecast to become the largest contributor to the increase in worldwide gas demand to 2023, taking the lead from power generation, which had historically held this role.

The change is especially marked in Asia and other emerging markets thanks to higher gas use in industrial processes and as feedstock for chemicals and fertilizers. Overall, industry accounts for more than 40% of growth in global gas demand to 2023, according to the IEA, followed by 26% for power generation.

LNG also is progressively taking a larger share in global gas trade, especially in Asia. LNG trade as a share of total gas trade is forecast to rise from a third in 2017 to almost 40% in 2023. Emerging Asian markets are expected to account for about half of global LNG imports by 2023. “This continued rise in the LNG market will have significant impacts on trade flows, pricing structures and global gas security,” IEA researchers said.

“The current wave of LNG export projects will increase liquefaction capacity by 30% by 2023. This will be led by an increase in output from the United States, which accounts for nearly three-quarters of the growth in total global LNG exports in the period, followed by Australia and Russia.

“However, a lack of new LNG projects after 2020 could lead to a tightening of LNG markets. Given the long-lead time of such projects, investment decisions will need to be taken in the next few years to ensure adequate LNG supply beyond 2023,” according to IEA.

Price competitiveness also is expected to be crucial for gas to gain a firm foothold in emerging markets.

“This requires market evolutions and reforms, such as the development of trading hubs, opening up of the downstream to competition and fair access to infrastructure,” researchers said. “Improving air pollution will be a key driver of gas demand, especially in emerging markets, and industry’s ability to improve its environmental footprint, including by reducing methane emissions and expanding the deployment of carbon, capture, utilization and storage technology, will be critical for gas prospects.”