Richard Glick has been sworn in at FERC, bringing membership at the regulatory agency to four of its possible five positions, but Kevin McIntyre, who is set to become the next chairman, remains on the sidelines. 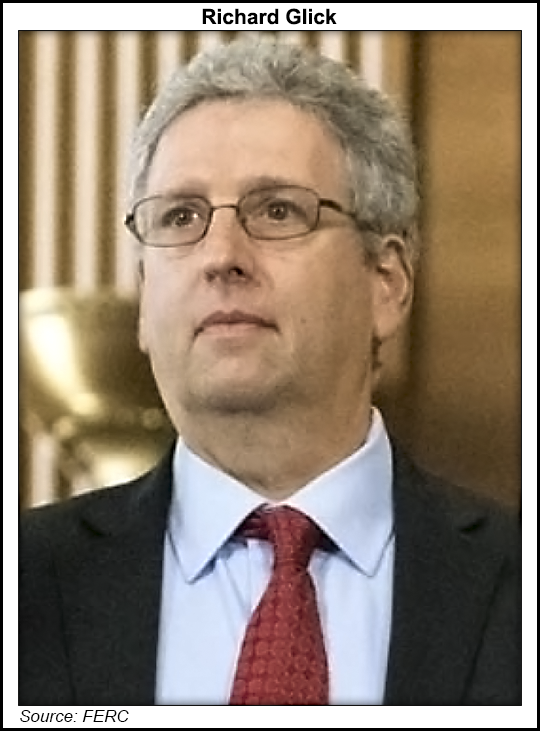 Glick, a Democrat who has been general counsel for the Senate Energy and Natural Resources Committee, was sworn in Wednesday, according to the Federal Energy Regulatory Commission. He was nominated by President Trump in August to serve the remainder of a five-year term expiring June 30, 2022.

Between 1998 and 2001 Glick served as a senior policy adviser to President Clinton’s Department of Energy Secretary Bill Richardson. Before that Glick was the legislative director and chief counsel to Sen. Dale Bumpers of Arkansas. From 1988 to1992 Glick was an associate with the law firm of Verner, Liipfert, Bernhard, McPherson and Hand.

Glick received a bachelor’s degree from George Washington University and a juris doctorate from the Georgetown University Law Center.

Swearing in ceremonies at FERC customarily come within a few days of Senate confirmation votes. The official explanation of the delay has been a paperwork holdup, something that has never been known to happen at this juncture with past nominees who have been nominated and confirmed by the Senate.

Various theories have been floated as to whether the unprecedented delay in seating a full five-member panel has something to do with the upcoming vote on the Department of Energy’s proposed rule for FERC to prop up declining numbers of coal and nuclear-fired power plants.