More earthquakes jolted parts of central Oklahoma Saturday, prompting added speculation about the ties between the quakes and oil and natural gas drilling wastewater injection processes. Although small in magnitude — measuring 2.6-4.0 on the Richter Scale — the frequency of the tremors has already surpassed 2013 totals, according to the Oklahoma Geological Survey (OGS). 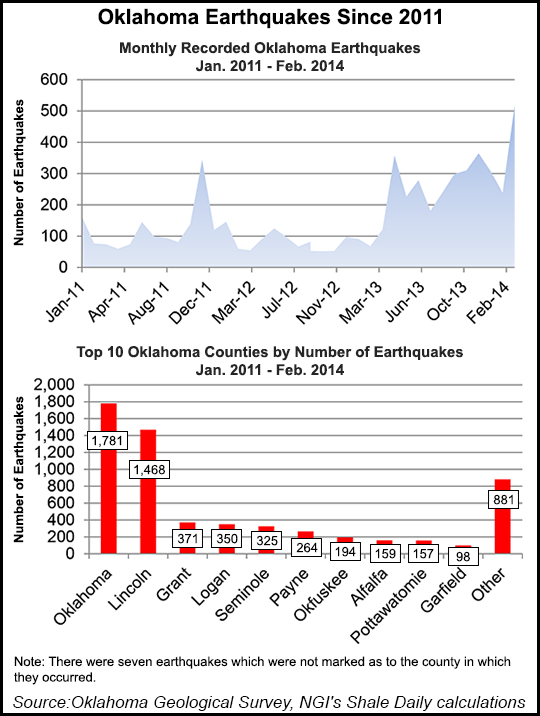 The U.S.Geological Survey (USGS) recorded three quakes in central Oklahoma Saturday, the most severe one about a mile south of Langston, which is 35 miles northeast of Oklahoma City. No injuries or damage were reported.

An Oklahoma Independent Petroleum Association spokesperson told NGI‘s Shale Daily that producers have a working group addressing the issue, adding that “oil and gas production is found in 70 of Oklahoma’s 77 counties. [Thus,] any seismic event is likely to occur near oil and gas activity, but that does not mean oil and gas activity is the cause.”

OGS, which provides research for the USGS, has concluded there has been “a significant increase” in seismic activity in the state since 2009, but seismologists draw short of tying all of the activity to energy production. “During the 30-year period prior to 2009, when the OGS expanded its monitoring to a network of stations, there was an average of about 50 locatable earthquakes each year, with only a few strong enough to be felt,” the OGS said.

Earthquakes induced by the injection of wastewater, such as that from oil and gas drilling, can cause larger quakes, USGS scientists suggested last month (see Shale Daily, March 10).

USGS research showed that a magnitude 5.0 injection-induced quake near Prague, OK, in 2011 (see Shale Daily, Oct. 25, 2013), could have triggered a 5.7-magnitude quake less than a day later. If that is proven to be the case, the 5.7-magnitude quake could be the largest injection-caused earthquake ever, according to USGS. Quakes in the U.S. midsection were rare until recent years.

Separately on Monday, the Kansas Corporation Commission indicated that it is working on draft rules addressing ties between quakes and oilfield wastewater disposal practices. A public meeting on the proposed new regulatory rules is scheduled April 18.

Regulators in Kansas may establish rules regarding the gas waste disposal process similar to those enacted in Illinois last year. Kansas Geological Survey officials have called the “traffic light” approach a model for other states.

The Oklahoma Corporation Commission has also adopted an approach in which the industry, state regulators and state geological survey seismologists work cooperatively, and discontinue or decrease the level of wastewater injection activity when swarms of small quakes occur in a given area.

Including the Mississippian Lime formation, Kansas oil production recently has rise to 134,000 b/d, the highest level in two decades.

According to the OGS, there have been close to as many 3.0-magnitude or greater quakes already this year as occurred throughout all of 2013, when a record 222 were recorded. So far in 2014, there have been 253 tremors noted, according to state seismic data.

While most quakes occur naturally, scientists increasingly believe that some smaller temblors are linked to fracture (frack) stimulation work. Millions of gallons of wastewater may be trucked from fracking sites to wells where the water is injected thousands of feet below the surface.If that work is done near an existing earthquake fault, past scientific studies have concluded the production process can trigger large tremors.

That is part of the rationale used in California by opponents of plans to do more exploratory drilling in the Monterey Shale, which borders the San Andreas Fault running north-to-south through Kern County. There is a resurgence of lobbying in Sacramento for the legislature to create a ban or moratorium on fracking (see Shale Daily, April 4).