General Electric (GE) and Rosemead, CA-based Southern California Edison Co. (SCE) on Monday unveiled what they said is the world’s first battery-natural gas turbine hybrid system at an SCE electric generation site in the Los Angeles area. It marked the first of two units GE will provide the Edison International utility this year.

Given the continuing uncertainty in Southern California surrounding the closure of the Aliso Canyon underground gas storage field, the GE-SCE installation drew various state and regional energy and environmental officials, along with company executives.

Paul McElhinney, CEO at GE Power Services, emphasized that the applications for the hybrid EGT are wide ranging, and he said GE intends to develop other “tailor-made solutions” that will allow greater flexibility in integrating more renewable-based power onto the grid wherever that might be. SCE President Ron Nichols said the new system at the utility’s peaking plant in Norwalk, CA, will help provide “better use of resources on the grid, provide enhanced reliability, reduce environmental impact, and reduce costs” while expanding reliance on solar, wind and other renewables.

The work by units of GE with the utility is an indication of the expansion of the reliance on renewable sources of power and comes within weeks of a similar development at the University of California-Irvine, where researchers reported advances that allow increased reliance on intermittent renewable sources of electric power through a power-to-gas technology that converts excess renewable electricity to hydrogen.

GE and SCE officials emphasized that they developed the hybrid system in response to California’s commitment to have at least half of the state’s power supplies come from renewable sources by 2030. “The hybrid EGT helps balance variable energy supply and demand,” said an SCE spokesperson.

GE officials said the heart of the new hybrid system is “a groundbreaking control system that seamlessly blends output between the battery and the gas turbine.” In addition, the energy storage capacity of the battery has been specifically designed to provide enough time coverage to allow the gas turbine to start and reach its designated power output, a GE spokesperson said.

As a result, the system does not need to burn fuel immediately in order to dispatch energy as soon as it is required. 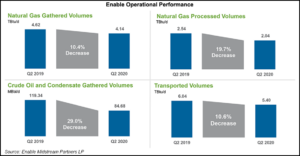 Aggressive cost-cutting helped prop up the bottom lines in the second quarter of two big Lower 48 midstream operators, Enable Midstream Partners LC and EnLink Midstream LLC, and expense control remains a high priority amid the shocks of the coronavirus pandemic and the demand destruction it created. Oklahoma City-based Enable said it moved swiftly to…