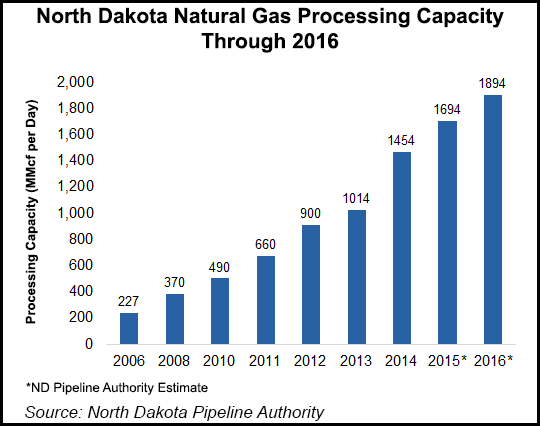 “Additional processing capacity is always great news; however, it will be difficult to immediately determine [Garden Creek II’s] impact given the lag in production reporting,” said a spokesperson for North Dakota’s Department of Mineral Resources (DMR), which includes the oil/gas division.

The impact on flaring will first be seen with the September oil/gas statistics, which will be released in November, the DMR spokesperson said.

Spencer said once he has board approval, he expects to announce additional Williston Basin gas processing capacity projects by the end of this year. Oneok is the Williston Basin’s largest independent operator of natural gas gathering and processing facilities.

These will round out the previously mentioned investments of up to $7.5 billion through 2016, including $3.8-4.3 billion in gas gathering and processing projects, and about $3.2 billion in NGL projects. “Nearly $4 billion is for growth projects related to resource development in the Williston Basin,” Spencer said.

For Oneok Partners, the aggregate of these projects is projected to generate adjusted earnings-before-interest-taxes-depreciation-amortization of five to seven times the initial investments.