Because the number of wells drilled in the United States that produce both oil and natural gas has increased sharply since 2007, natural gas production can rise even as the number of rigs characterized as drilling solely for natural gas falls, the Energy Information Administration (EIA) said Monday. 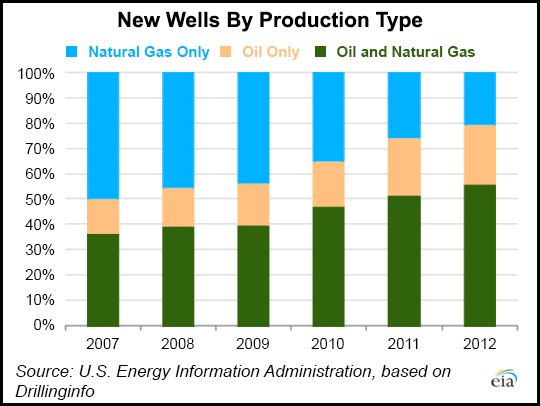 “In the past, the number of gas-oriented drilling rigs in a particular region has been a common metric for estimating the production of natural gas. However, technological advances have led the way to the widespread use of new oil and natural gas extraction techniques that have opened up a hydrocarbon resource base dramatically larger than previous estimates,” EIA said.

The first reportfound that increases in drilling efficiency and new well productivity, rather than an increase in the number of active rigs, have been the main drivers of recent growth in domestic oil and gas production.

EIA is not the first to notice that the old-fashioned rig count doesn’t quite cut it in the shale era. Four years ago, Bentek Energy LLC noted per-rig efficiency gains that had been achieved by the industry when it launched its Bentek Productivity Index (see Daily GPI, Oct. 29, 2009). More recently, Raymond James & Associates Inc. said it will include well count and footage count forecasts in its analyses of capital spending plans by producers (see Daily GPI, Sept. 30).

And Baker Hughes Inc., famous for its rig count, has added a well count to the slate of data it provides to the industry. The idea is that when combined with its Rig Count, drilling efficiencies can be tracked by basin (see Shale Daily, Oct. 15).

The Lower 48 land rig market has “digested” the transition to oil-directed drilling, but there’s still an oversupplied pressure pumping market, brought about in part by efficiency gains, according to Nabors Industries Ltd. (see Shale Daily, Oct. 24). Although the market for new technology remains high, the completion services market, specifically pressure pumping, or hydraulic fracturing, “is less sanguine,” they said.

The average U.S. rig count in the final three months of this year should decline by about 2.5% from 2Q2013, a typical seasonal slowdown around the holidays, and above the pronounced drop in the same period of 2012, when the rig and well count fell by more than 5%, according to Baker Hughes (see Shale Daily, Oct. 18).