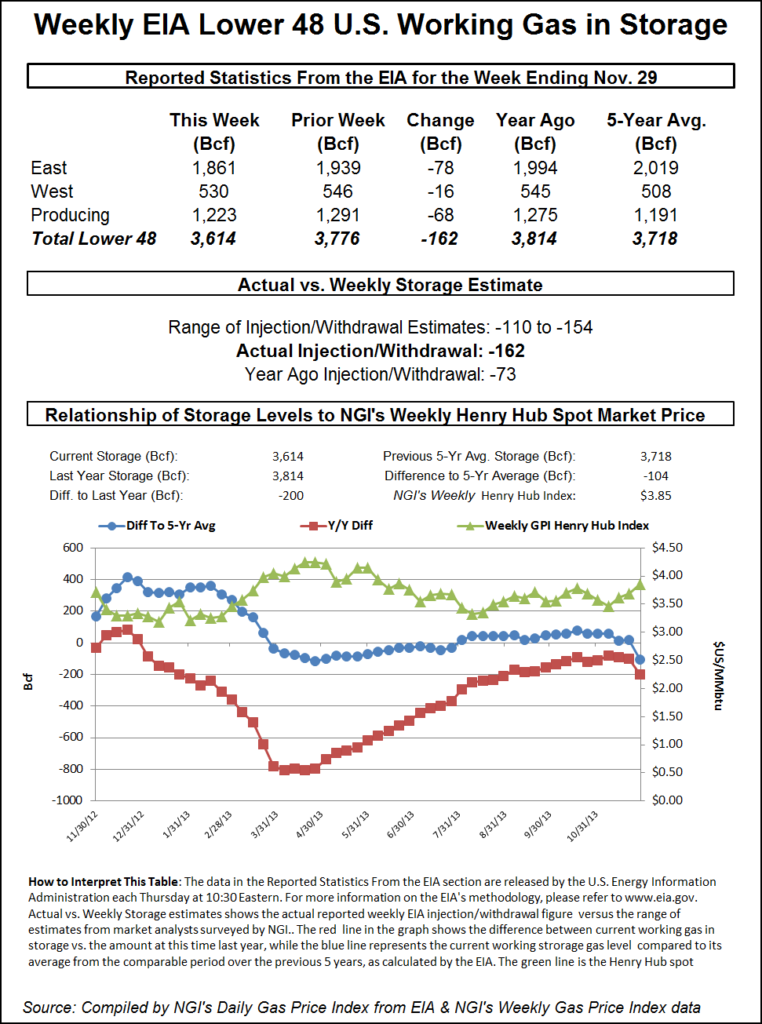 Traders had to deal with a double whammy in the form of a rising screen and cold weather pummeling the country from coast to coast. The greatest gains were seen in the transportation-challenged New England markets, but double-digit advances were seen in the Midwest, Rockies, Midcontinent and California. The Energy Information Administration (EIA) reported a withdrawal from inventories of a whopping 162 Bcf, about 15 Bcf more than what traders were expecting, and prices scurried higher. At the close, January had risen 17.2 cents to $4.132 and February had gained 15.6 cents to $4.114. January crude oil rose 18 cents to $97.38/bbl.

The massive incursion of cold air, which made its way into the northern tier of states, Rockies and Midcontinent Wednesday, started attacking the Midwest and Great Lakes Thursday. Prices were up by double digits. Chicago’s Wednesday high in the 50s plunged to below freezing Thursday with colder readings yet to come. AccuWeather.com forecast that Chicago’s 29 degree high Thursday would fall to 26 Friday and reach no higher than 23 on Saturday. The normal high in Chicago is 39 in early December. Detroit’s high of 54 Wednesday was expected to fall to 33 Friday and 28 on Saturday. The seasonal high in Detroit is 40. Cleveland’s balmy high of 62 on Thursday was seen slipping to 34 on Friday and just 29 on Saturday. The typical high in Cleveland this time of year is 41.

As stout as prices were in the Great Lakes, freeze-offs in the Rockies and San Juan Basin prompted still greater gains as production losses Thursday were estimated at about 0.5 Bcf/d, and pipeline operators continued to issue critical notices as the cold delivered a deadly punch of snow and ice that eventually could stretch more than 1,000 miles from the Plains into Central Texas and east to the Ohio River Valley (see related story).

Even California has not been immune to the cold.

“In part of the continuing saga of the bitterly cold air invading the interior West and Plains this week, Arctic air will also reach into California, setting the stage for a frost and freeze and a risk to agriculture,” said AccuWeather.com meteorologist Alex Sosnowski. “Temperatures will dip to record low levels on one or more dates over the San Joaquin Valley and the Central Coast, home to a wide variety of agriculture. In some cases, temperatures will challenge records in the books for more than 100 years with lows forecast to be in the upper 20s. For example, the record low at Fresno, CA, is 28 degrees each date from Dec. 4 to 6, set during the years 1897, 1903 and 1891, respectively.

“It is not so much that it has never gotten this cold in the region before, but rather it rarely gets this cold this early in the winter season,” said AccuWeather.com meteorologist Ken Clark.

The physical demands of moving gas in and around temperature-stricken areas has distorted normal pricing arrangements in California as well. Gas for delivery Friday at the PG&E Citygates rose 13 cents to $4.40, and gas at the SoCal Citygates added 12 cents to $4.37. Deliveries to SoCal Border points added 21 cents to $4.42, pushing SoCal Border over Citygate and gas on El Paso S Mainline rose 17 cents to $4.61.

Expectations of the storage data for the week ended Nov. 29 were for the season’s first triple-digit withdrawal, and the range of estimates was wide, but not quite wide enough. A Reuters survey of 24 traders and analysts showed a range of 110 Bcf to as much as 154 Bcf. The average came in at 138 Bcf. IAF Advisors in Houston was expecting a pull of 154 Bcf, and Bentek Energy’s flow model also figured on a 154 Bcf withdrawal. Last year, 62 Bcf was withdrawn, and the five-year average stands at a relatively thin 41 Bcf.

The rationale for the huge draw was fairly straightforward. Bentek said, “U.S. demand averaged 20.7 Bcf/d above the previous week’s average as total population-weighted degree days came in at 172 for the week, an increase of 79 week over week. A withdrawal of 154 Bcf would be the largest withdrawal posted in November since at least 1994, when EIA began reporting inventory changes for the U.S.”

Bentek cautioned that there were risks to the forecast, not the least of which is estimating the impact of the Thanksgiving holiday. That along with “extreme” demand makes the forecast more challenging. “Total U.S. demand peaked at more than 100 Bcf/d during the storage week, which is more than 20 Bcf/d higher than the previous single-day high set during November dating as far back as Bentek’s estimates go.

“However, some of this demand could be muted due to the holiday, despite Bentek’s sample of facilities posting strong withdrawals for the week as sample withdrawals in the East and Producing regions totaled more than 81.9 Bcf for the week.”

“It’s an early start to the winter. What could we see next week if we saw 162 Bcf this week? This could be a game-changer,” he said.