Prices for Friday physical gas delivery moved higher across the country except for at a handful of eastern points. Traders Thursday elected to get most of their deals done prior to what was thought could be a major market mover: the issuance of weekly storage data by the Energy Information Administration (EIA), which came in at a record 287 Bcf. 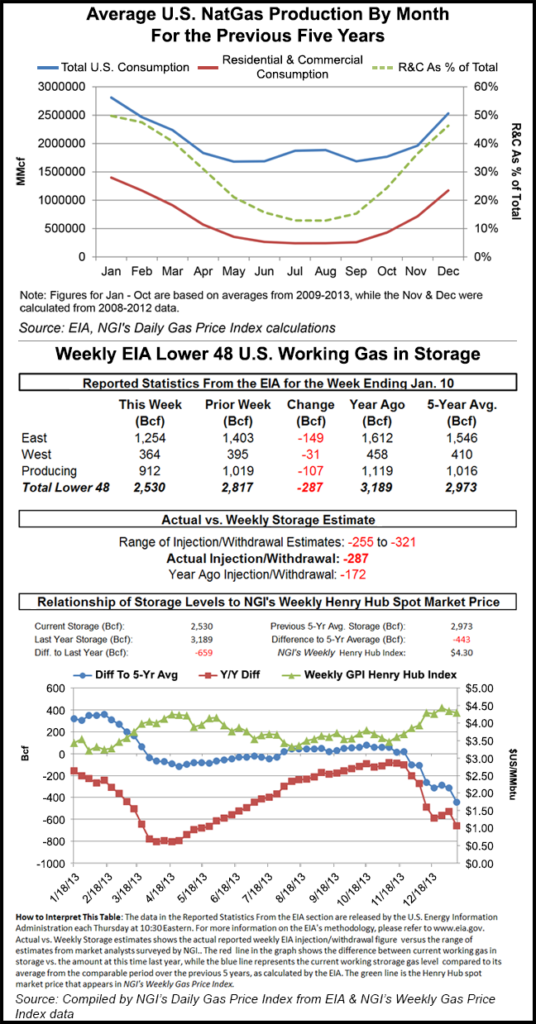 Market pundits had been expecting a titanic draw in Thursday’s 10:30 a.m. EST release of storage figures for the week ending Jan. 10. Estimates included Ritterbusch and Associates at 302 Bcf and IAF Advisors at 309 Bcf. Bentek Energy was expecting a pull of 301 Bcf. Last year, 156 Bcf was withdrawn, and the five-year average is for a 159 Bcf decline.

The actual figure, while still a record, caught a few by surprise. Tim Evans of Citi Futures Perspective said, “The miss suggests that the overall impact of well freeze-offs and extra heating demand were less than most had calculated. The overall outlook remains bullish, with plenty of heating demand forecast for the balance of the month, and so we would expect the downside price reaction to prove limited.”

Points in the Great Lakes and Midwest far surpassed the dime gains posted on average as temperatures were forecast to remain well below seasonal norms. Forecaster Wunderground.com predicted that the high in Milwaukee Thursday of 34 would drop to 26 on Friday and decline further to 23 on Saturday. The normal high in Milwaukee is 29. Chicago’s Thursday high of 35 was predicted to slide to 24 Friday before reaching 27 on Saturday. The seasonal high in Chicago is 31. Detroit’s high Thursday of 27 was seen dropping to 24 Friday and holding through Saturday. The normal high in the Motor City this time of year is 30.

Blizzard-like conditions were forecast for portions of the area. “Snowy conditions persist for the upper Midwest and Great Lakes region and cold air continues spreading across the East on Thursday,” said Wunderground.com meteorologist Kari Kiefer. “A strong low-pressure system moves over the Great Lakes and pulls cold air southward from Canada. This will continue pushing cold air across the Eastern Valleys, with high temperatures expected to remain 10 to 15 degrees below normal for most areas. Snow showers will persist along the northern side of this system, and strong winds will create blizzard conditions across Minnesota and Wisconsin…Snowfall totals will range from 3 to 5 inches, but the high winds and blowing snow will be the main concern.”

Marketers in the area were scrambling to line up supplies amid not only high prices, but also a high basis. “We paid $5.16 for gas on Consumers, and the basis is up to 48 cents. We are continuing to buy as much as we can,” said a Michigan marketer. “We are concerned because February doesn’t look very warm either.

“March could be a problem, and we were thinking of drawing down storage, but that might not be wise. Things might not go well and there could be delivery problems.”

Points losing ground on the day were seen mainly in the East and Northeast as temperatures were expected to remain above normal. Wunderground.com predicted that Thursday’s high in Boston of 40 would reach 44 on Friday before slipping to 42 on Saturday. The normal high in Boston is 35. New York City’s high Thursday of 40 was expected to rise to 45 Friday before sliding to 38 on Saturday. The seasonal high in New York is 38.

“The latest guidance is really revving up next week’s cold risks, particularly by mid to late for the Midwest and East,” said Matt Rogers, president of the firm. “While a coastal storm threat may deliver snow to the East Coast cities, the bigger story is the much stronger cold air being wrapped in behind it. We had to push Chicago to almost sub-zero low temperatures and the Northeast to single-digit lows for the peak of the cold push, offering a significant demand gain from [Wednesday’s] outlook.

“There are still plenty of detail challenges, but the big picture is more sharply colder today for the six-10 day range. The 11-15 day still features a robust cold outbreak focused on the first half that should hit the Midwest and East hardest, but could also make a bigger impact in the West. While the Alaskan ridge holds, a split flow below it could lead to some early February variability.”

The 287 Bcf withdrawal figure may have come up a bit short versus the consensus estimate, but it was still a record with meaningful implications on prices in the short-run. January tends to be a critical time for storage levels, because it is on average the single greatest demand month of the year in the U.S. If storage levels exit January too far above their historical norms, that usually doesn’t bode well for gas prices in the short-term. However, the 287 draw down from last week, coupled with a generally colder than normal winter, has left gas storage a full 443 Bcf below its average over the previous five years.

“Even if the rest of the winter turns out to be somewhat warmer than normal, the U.S. should still emerge from the winter of 2013-2014 with less gas in the ground than the five-year average, and that should be constructive for prices, everything else being equal,” said Patrick Rau, NGI director of strategy and research. He added that any short-term price rise could be held in check if power producers switch away from gas and burn more coal and/or if producers “cheat” on their stated 2014 capex budgets by spending more on gas production than they previously announced.