Spot natural gas for Friday delivery continued its downward trek in Thursday’s trading as the snow and ice storms that pummeled the South turned to unleash their fury on the Eastern Seaboard. 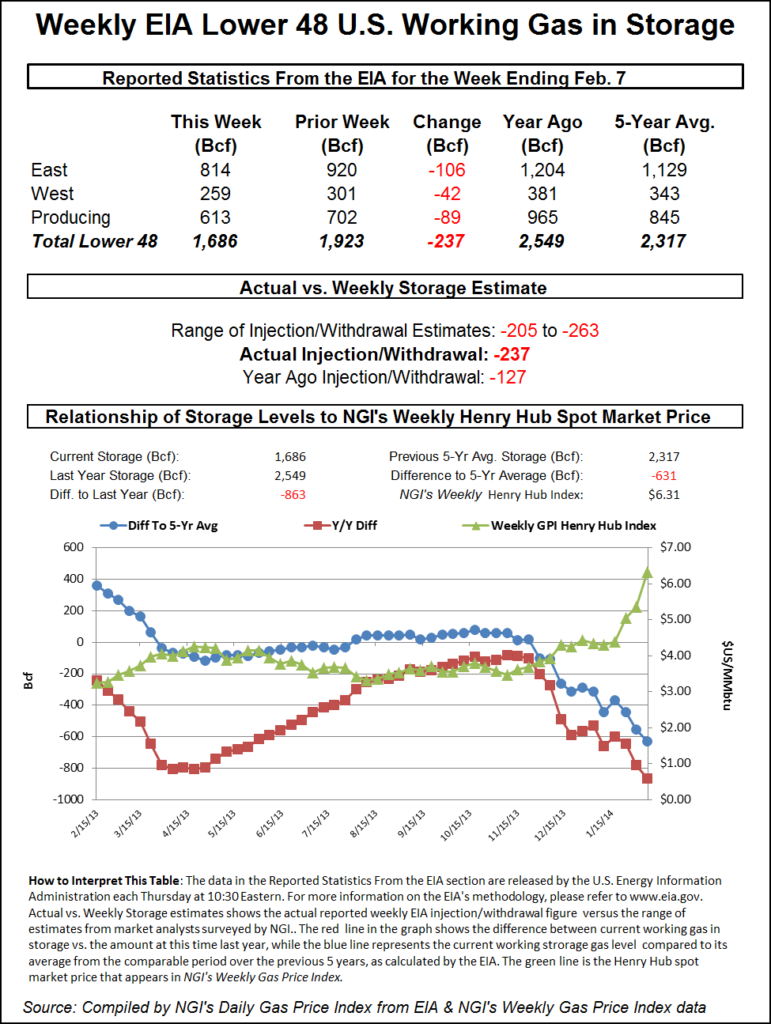 The East proved to be the day’s biggest loser, with prices chalking up losses of $1 or more at a few points, but most locations saw declines of a quarter to 50 cents. A few points did post gains.

The Energy Information Administration (EIA) reported a withdrawal from storage of 237 Bcf, somewhat greater than market expectations, and that, along with an early Thursday morning pipeline explosion in Kentucky (see related story), was enough to unnerve the bears, and prices scored double-digit gains. At the close, March had advanced 40.1 cents to $5.223 and April had added 7.9 cents to $4.632. March crude oil shed 2 cents to $100.35/bbl.

Next-day gas declined at most points as the economic impacts of the storm rattled through the market. The Wall Street Journal reported that the winter storm that “blanketed the Southeast with ice and snow Wednesday…turned up the East Coast on Thursday, shuttering businesses, disrupting travel, closing schools and knocking out power. The storm has been blamed for several deaths.”

It added that economic impacts are often negative from such storms. In addition to many shops simply closing their doors, “economic research looking at weather shows that extreme cold can increase mortality, reduce spending on food among the poor, increase spending among the rich, and boost sales of sport utility vehicles.”

“With rounds of snow and ice repeatedly pummeling the South, Midwest and Northeast this season, school closings, canceled flights and business shutdowns have begun to add up for workers,” said AccuWeather.com’s Samantha-Rae Tuthill.

“In the winter storm system that spread from Texas to New England this week, multiple states, including Georgia, the Carolinas, Virginia and Maryland, all declared states of emergency. Massachusetts Transit Authority limited public transportation systems, and Pennsylvania and Connecticut issued certain vehicle bans. Emergency managers urged non-essential personnel to stay off the roads as much as possible.

“Abandoned cars [were] left by commuters at I-75 headed northbound piled up in the median of the ice-covered interstate after a winter snow storm, Wednesday, Jan. 29, 2014, in Atlanta.”

Temperature forecasts called for high temperatures along the East Coast to make it above freezing, but still remained below seasonal norms. AccuWeather.com reported that Thursday’s high in New York City of 36 degrees was expected to climb to 40 by Friday and slide back down to 34 by Saturday. The normal high in New York this time of year is 41. Philadelphia’s 39 high Thursday was seen falling to 38 Friday and reaching 34 by Saturday. The seasonal high in the City of Brotherly Love is 43. Baltimore’s 38 high on Thursday was forecast to reach 40 Friday but drop to 34 on Saturday. Normally, the high in Baltimore in mid February is 45.

On Dominion, parcels for Friday delivery fell 30 cents to $5.23, but on infrastructure-challenged Transco Leidy next-day gas rose 15 cents to $2.85. On Millennium, gas for Friday came in at $4.81, down 56 cents.

The soaring prices in the next-day physical market in the Midwest have actually worked to some peoples’ advantage. “We haven’t bought any gas on Consumers or Michcon for the last three days and have actually sold some length on Michcon,” said a Michigan marketer. “It looked like what we had bought was too much and we were able to sell it at a pretty good price.”

“On Consumers we are trying to avoid buying when the price is above what we paid at the start of the month. Depending on what the price is for the four-day weekend, we may not for that either,” he said. He pointed out that many of their customers were schools and they were closed Friday through Monday.

“We don’t want to be paying these prices if we don’t have to. We try to stay on top of the market, and it looks like temperatures will moderate and then get cooler towards the end of the month. We don’t want [pipeline] penalties and we don’t want to have to buy on a very pricey day.”

Supplies got a little thinner following the early morning explosion of a major pipeline moving gas from the Gulf to the Northeast. A Columbia Gulf pipeline exploded early Thursday morning about 90 miles south of Louisville, KY.

“We have one customer in Kentucky and he paid $5.79 down there for tomorrow. It doesn’t seem as though they were impacted,” the marketer said.

Temperatures across the Midwest were forecast to trend lower. AccuWeather.com predicted that Chicago’s 31 high Thursday would slide to 22 on Friday and hold into Saturday. The normal high in Chicago is 35. Milwaukee’s forecast high also of 31 was seen falling to 21 Friday and dropping to 20 on Saturday. The seasonal high in Milwaukee is 32.

Futures traders see the market in bullish mode. “This was definitely a bullish move, and volume was 179,000 contracts just in the March,” said a New York floor trader. “At this point $5 is good support, and $5.25 is my next target higher. The market basically rallied up throughout the day. The bid offer spread was just one or two ticks the whole day.”

Weather forecasts are calling for warming in the six- to 10-day period but a return to cooler temperatures in the 11- to 15-day time frame. Commodity Weather Group in its Thursday morning report said, “Colder weather still dominates the short-range period across especially the Midwest and East, enhanced somewhat by a major East Coast winter storm today. But the big warming for next week is still on schedule with the bulk of the warmest anomalies now moving into the second half of the six-10 day.

“We shifted warmer for temperatures in the Midwest and East [Thursday] for this time frame, but then the pattern starts bouncing back to the colder side in the 11-15 day. We went a bit stronger with the colder return as well today with the first cold push focused toward the Rockies, Plains, Texas and Midwest,” said Matt Rogers, president of the firm. “The initial intensity of the first cold push may not be that strong, but a secondary push could be slightly stronger toward the Midwest and then East by mid to late period.”

Near-term weather conditions in the Northeast continued to deteriorate. CNN reported that the storm that Atlanta and Charlotte weathered is headed to the East and Northeast. Forecasters say this may be the biggest winter blast of the season so far. All federal offices in the nation’s capital were ordered closed, and thousands of employees were being told to stay home. Heavy snowfall may close down the city’s Metro system.

Philadelphia braced for up to 11 inches of snow, while New Yorkers waited for as much as 15 inches, CNN reported.

But it’s not just the weather that’s pushing natural gas prices, according to Williams CEO Alan Armstrong, who is seeing signs of a turnaround for natural gas.

“We recently saw on Transco a peak day of about 11.8 Bcf/d,” Armstrong told analysts earlier this week. “If you just did that in degree days, there should have been about a 20% increase over our normal, just if you look at heating degree days.

“We actually saw a 30% increase on that day relevant to the norm. Part of the reason for that is, is that gas has found its way into lot of crooks and crannies…and additional industrial loads.”

Gas “is starting to take a bigger share from fuel oil…Demand is creeping up even beyond just what a cold winter has brought on this year.”

“What we have got going on right now in the industry is exactly what we were hoping for in terms of the tailwinds that are created…We are seeing gas demand starting to pull through, and we are starting to see price signals…into the forward markets a little bit, on natural gas in a way that is going to encourage the continued development of the supply.

“Frankly, one of the risks to our strategies was that we would see gas prices so low for so long that we would be in a position where it would be hard to recover and meet that demand and we would see prices swing way back up on a sustained basis, and then start to kill the long-term demand growth and the overall market growth for the U.S.”

But, now there are signals “that better days are ahead,” Armstrong said and a big part of that is going to be ethane development (see related story).

The Thursday morning release of storage data by the EIA likely reinforced the ongoing dynamic of ever-decreasing supplies. Last year, 152 Bcf was withdrawn and the five-year average stands at 162 Bcf. Traders were looking for a lot more for the week ended Feb. 7.

Ritterbusch and Associates forecast a withdrawal of 225 Bcf, and a Reuters survey of 25 traders and analysts revealed an average 233 Bcf with a range of 205-263 Bcf. Bentek Energy’s flow model calculated a pull of 231 Bcf.

Storage now stands at 1,686 Bcf, the lowest in about a decade for this time of year. And with another withdrawal of 200 Bcf, plus say 400 Bcf taken out in March, storage now drops to about 1.1 Tcf. Refilling from such a low level is going to require a lot of gas.

One industry veteran suggested that operators “would take advantage of the warmer days in April and stick as much as they can in the ground. The problem is that you can take advantage of certain conditions and wait, but most facilities have rules about getting gas into storage early, and you have to have 85% to 90% of your gas in the ground by Oct. 1.

“What happens is that because of the volume that is going into the ground, it’s not the storage volume divided by seven months. You can put a lot in during April and May, but it just keeps decreasing. The pipelines give you a range, and the range just keeps decreasing throughout the storage season. Salt storage really doesn’t apply since it is for peak load usage. I think the early refills will be large,” he said. “I think we’ll see about a 50 cent rise in price over the summer; gas [Henry] should trade in the $5 range.”