Illinois, Michigan, Ohio and Pennsylvania will account for nearly one-half of the estimated 27.3 GW of new natural gas-fired generation capacity in the United States by the mid-2020s, according to the Energy Information Administration (EIA). 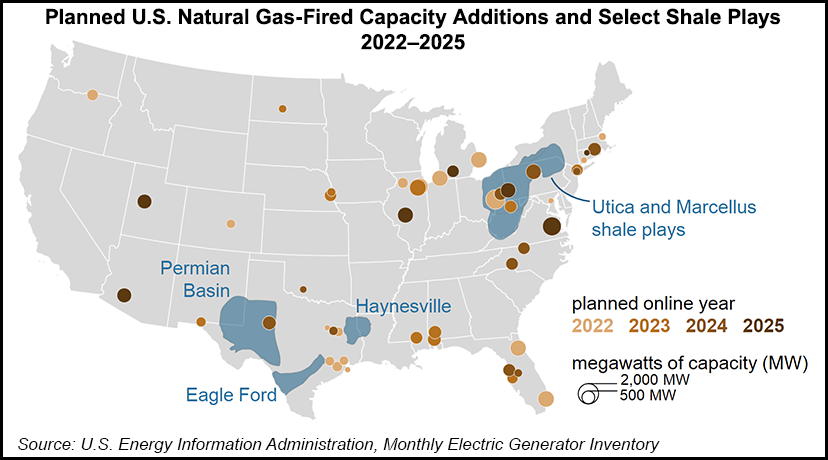 In its latest Monthly Electric Generator Inventory report. EIA said there was a common thread among the four states: each has natural gas pipeline access from the Marcellus and Utica shales.

Together the four are set to gain 43% of gas-fired generation capacity slated to go online from 2022 to 2025. Illinois is projected to add the most capacity at 3.8 GW, said EIA. The statistical arm of the U.S. Department of Energy (DOE) also predicted that Michigan would add 3.2 GW during the period, followed by Ohio at 2.9 GW and Pennsylvania at 1.9 GW.

EIA said the Marcellus and Utica produced 34% of U.S. dry natural gas output during the first half of 2021. One state within reach of Appalachia production — New York — is working to reduce its reliance on natural gas for electricity. The state recently rejected air permits for a pair of projects that would have added nearly 1 GW of gas-fired capacity.

Growth In Florida And Texas

A demand market with access to expanding infrastructure is Florida, which EIA predicts will add 3.2 GW of gas-fired generating capacity from 2022 to 2025.

“Although Florida does not produce significant amounts of natural gas, its regional pipeline networks have been continually expanding to serve natural gas-fired generation units as older coal- and oil-fired units retire,” said EIA.

In fact, EIA noted that five gas-fired plants are set to start commercial operations in the Sunshine State during the period. Construction is underway for three facilities, with another two scheduled to begin construction and be completed by 2024, said EIA.

Texas gas-fired generation also is set to expand, according to EIA. The state produces more gas than any other state, with contributions from the Haynesville and Eagle Ford shales, along with associated gas from the Permian Basin. In August, Texas boasted 70.7 GW of gas-fired capacity, and that figure is set to grow by 4%, or 2.8 GW, by 2025, EIA reported. “Growth in natural gas production in Texas,” said EIA, “has encouraged natural gas-fired capacity additions and regional pipeline expansions to accommodate growing natural gas exports to Mexico, as well as record-high liquefied natural gas…exports from terminals in South Texas and in Louisiana.”