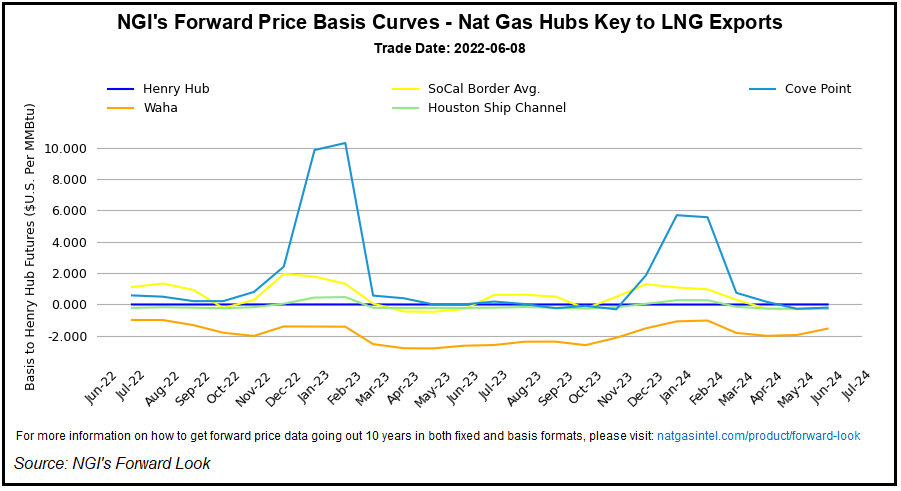 For the Lower 48 as a whole, fixed price moves were mixed in terms of the week/week change. Once the dust settled on another stretch of volatile trading for natural gas, Henry Hub forwards for July delivery climbed 0.3 cents week/week to $8.700/MMBtu, NGI’s Forward Look data show.

However, that included a dramatic market-wide day/day sell-off between Tuesday and Wednesday, coinciding with reports of an explosion at the 2 Bcf/d Freeport facility on Quintana Island on the Texas coast.

The national benchmark had stood at $9.294 as of Tuesday before plummeting 59.4 cents on Wednesday, according to the Forward Look data.

Day/day fixed price declines of around 50-70 cents were the norm throughout the Lower 48 as traders tried to assess the implications of downtime at a major U.S. export facility.

The Freeport news presented another twist in the tale of a wild period for natural gas futures prices. Nymex July futures had opened the week on a tear, rocketing 79.9 cents higher on Monday and going as high as $9.664 Wednesday prior to reports of the Freeport explosion.

After plunging 59.4 cents in Wednesday’s session, the July contract recovered 26.4 cents to settle at $8.963 on Thursday.

“Following the early sell-off, Freeport LNG confirmed” Wednesday evening “that the facility would be offline for a minimum of three weeks, further pressuring prices after the close,” analysts at Tudor, Pickering, Holt & Co. (TPH) said of the impact on futures heading into Thursday’s session.

Whether the facility remains offline beyond the three-week window will determine whether the recent sell-off is “overdone or undercooked.” A 2 Bcf/d outage over a three-week period would amount to 40-45 Bcf added to balances, suggesting the market is pricing in the risk of an extended outage, according to the TPH analysts.

“While we await further color on timing of restart in the coming weeks, incremental storage to our end-of-season balances in the 3.2 Tcf range” keeps the storage trajectory “historically tight and will keep us from throwing in the towel on the positive risk/reward setup for the time being,” the TPH analysts added.

An outage of only three weeks “would be pretty inconsequential” in the broader discussion of the storage trajectory and ongoing supply adequacy concerns, according to Bespoke Weather Services. On the other hand, “an outage that runs, say, six to 10 weeks would become quite material.”

The macro outlook for natural gas “remains easily bullish” in the event the Freeport terminal returns to service “sooner than later,” Bespoke said. Still, “as bullish as things look right now, if Freeport were to be out long enough to equate to 200 Bcf back into storage, that definitely alleviates a huge chunk of the storage concerns we have had.”

Operators injected 97 Bcf into U.S. natural gas stockpiles during the week ended June 3, lifting inventories to 1,999 Bcf overall, the Energy Information Administration said. Storage ended the period at a 340 Bcf (minus 14.5%) deficit to the five-year average.

Analysts at Goldman Sachs Commodities Research similarly pointed to the duration of the Freeport outage as the key factor that could ultimately determine the event’s market impact.

“Our preliminary take is that, if the outage at the facility lasts less than one month, its net impact on U.S. gas balances is likely mostly offset by the strength recently observed in U.S. gas demand for power,” researchers Samantha Dart, Damien Courvalin and Romain Langlois wrote in a note to clients. “Not only is the weather outlook pointing to hotter-than-average temperatures later this month, but we’ve also seen power burns consistently stronger than what weather and other variables can explain.”

The Goldman analysts pointed to limited coal availability as the likely driver of the strength in natural gas power burns.

This “tightness in coal availability” is leading “several utilities to constrain coal burns in shoulder months, so that they have it available during peak summer,” they said.

A longer outage for Freeport could extend into peak summer, “when utilities that have been saving on coal usage would likely utilize it more heavily, removing some pressure from gas demand versus our expectations,” the Goldman analysts added. Such a scenario “would have a potentially more significant loosening impact on U.S. gas balances, leading to a lower probability that gas needs to resort to Appalachia coal substitution to balance the market.”

Amid the outsized impact of the Freeport incident, the net week/week change yielded regional basis discounts at numerous Lower 48 hubs week/week. On the West Coast, Malin basis for July delivery shed 21.0 cents during the June 2-8 trading period, ending at a 26.4-cent discount to Henry Hub.

In the Northeast, Algonquin Citygates basis dropped 28.6 cents to minus 36.4 cents.

In terms of the latest weather outlook Thursday, midday models continued to show national demand decreasing during the June 18-20 time frame, according to NatGasweather.

After that, models “favor a return to a hot and bullish pattern June 21-24 as high pressure again rules most of the U.S. besides the Northwest and Northeast corners,” the firm said.