Proppant sand providers, which faced headwinds during the first quarter from low prices and conservative spending by their customers, will have to deal with a supply and demand imbalance that could pressure prices into the foreseeable future. 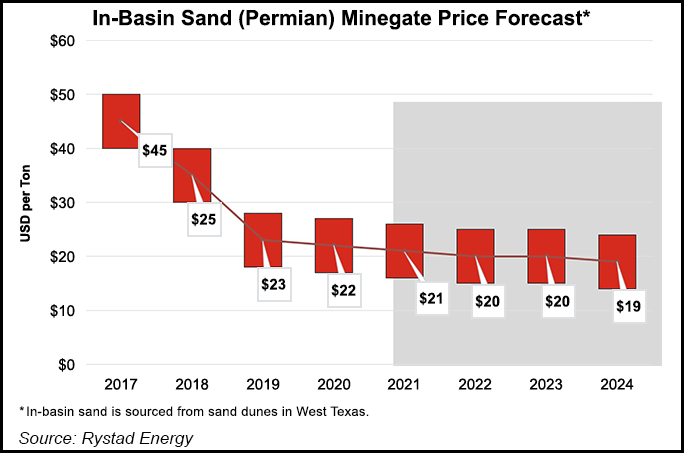 The price of fracture (frack) sand “is no longer highly correlated” to the price of West Texas Intermediate (WTI) crude, which in turn is weakening the credit quality of U.S. sand operators, according to an analysis by Moody’s Investors Service.

“Lower frack sand prices have led U.S. miners to revise their revenue and earnings expectations downward, while leverage has increased, valuations have collapsed and access to the capital markets has softened — all of which limit their prospects for mergers and acquisitions,” said Moody’s senior analyst Emile El Nems.

U.S. oil and gas sand operators are challenged by an oversupply of brown sand, less expensive and typically closer to basins in which oil wells are located. Proppant operators also are seeing displacement by more specialized northern white sand, which is higher priced and in high demand in certain basins, El Nems said.

Moody’s estimated the price of frack sand has fallen more than 20% over the past year. In-basin sand has low transportation costs versus railing in sand, and it’s at least 60% less expensive than northern white, making it economically compelling for exploration and production (E&P) companies.

While previously the price of frack sand was “highly correlated” with the price of WTI, Moody’s experts now think that correlation is “permanently reduced.” WTI crude is expected to sell for $50-70/bbl, “and so drilling activity is unlikely to rise substantially, limiting demand for frack sand.”

The Permian Basin has more in-basin sand developments, which should keep a lid on brown sand pricing, but keep an eye on the Eagle Ford Shale in South Texas, which uses more northern white sand, Rystad analysts said Friday in their latest Proppant Market Report.

Northern white prices have increased over the past two months on the spot market and are currently above $30/ton.

Around 60% of activity in the Eagle Ford “occurs at average treatment pressures” of more than 8,000 pounds/square-inch, or psi. That would suggest lower adoption rates for brown sand in the basin, which would be good news for northern white demand.

“In-basin sand mines in Eagle Ford have struggled to reach desired utilization levels in recent months, but we expect this issue to be solved in the near term,” Jacob noted.

Overall, frack sand demand should reach 181 million tons in 2024, representing 8% compound annual growth from 2019, according to Rystad. The most active, Permian sand demand is expected to grow to 85 million tons from 55 over the period.

However, Rystad expects 35-40% of northern white, considered the gold standard of the industry with respect to sand quality, to come off the market by the end of 2020.

The expectations for low proppant prices follow sluggish performance in the first quarter by some of the top Lower 48 frack sand operators, as E&P customers held firm to capital discipline.

In fact, Emerge Energy Services LP, which mines, produces and distributes silica sand through subsidiary Superior Silica Sands LLC, was notified by the New York Stock Exchange on May 17 that it was no longer in compliance with continued listing criteria to maintain an average closing share price of at least $1.00 over a consecutive 30 trading-day period. Emerge was given six months to regain compliance with the minimum share price.

Emerge is at one end of the spectrum, but other frack sand operators are struggling to meet E&P expectations: provide the best sand at the best price and in the most efficient way possible.

U.S. Silica Holdings Inc., headquartered in Katy west of Houston, delivered record results from its Sandbox unit, which helps move volumes more efficiently to E&P sites. There also was “a resurgence in both volumes and pricing for northern white sand that has continued into the second quarter,” said CEO Bryan Shinn.

The company reported a net loss of $19.3 million (minus 26 cents/share) in 1Q2019, a reversal from year-ago profits of $31.3 million (39 cents), as results were negatively impacted by costs related to plant startup and expansion expenses, merger/acquisition costs and contract terminations.

However, total revenue improved to $378.7 million, up 6% sequentially and 3% year/year. For the oil and gas segment specifically, revenue was 7% higher sequentially but down 17% year/year at $260.5 million.

The company made no changes to its previous guidance for capital expenditures, which are expected to be $100-125 million this year.

“For oil and gas, starting with sand proppants, demand and pricing for northern white sand began to strengthen in the first quarter, and we remain optimistic that we’ll see heightened activity around northern white sand in the coming quarters,” U.S. Silica’s management team said.

Oil and gas sand volumes are forecast to increase in the low to mid-single digits during 2Q2019 driven by the continued ramp in West Texas volumes and the reactivation of some northern white sand capacity.

“For Sandbox, we believe that load volumes should be up more than 15% sequentially. We have several recent customer wins and a very robust pipeline of potential new opportunities,” management said. “We are also seeing a trend toward larger jobs as more of our business today is being conducted directly with E&P companies.”

For Hi-Crush Partners LP, first quarter results were hit and miss. About 2.4 million tons (mmt) of sand were sold, slightly off from 2.6 mmt in 1Q2018, and less sand was produced at 2.3 million pounds from 2.5 million. The contribution margin for sand sales fell sharply to $29 million from $76 million, as the contribution/ton of sand sold plunged to $12.19 from $29.08.

“The macro conditions for the first quarter improved overall versus the end of 2018 as oil and gas prices climbed from their December lows and remain at constructive levels today,” CEO Bob Rasmus said during a quarterly conference call earlier in May. “However, the completions’ backdrop remains challenging, as the restart of activity across much of our footprint came back slower than anticipated, and operators remained focused on capital discipline.”

Regardless of the near-term conditions, he said, the contracts with E&Ps “represent about 60% of our contracted volumes and are the bedrock of our strategy as we continue our focus on meeting their dynamic needs with integrated mine to well site solutions.”

In the first three months, Hi-Crush completed some major capital projects on time and under budget and ramped production from new capacity at the Kermit facility in West Texas.

The company also has “extended our growth with E&Ps and now have also invested in technology that will better enable our operations in the last mile,” Rasmus said. “Execution here is critical, not just over the near term, but for years to come.”

The operator, which is converting to a C-Corp effective June 3 to become Hi-Crush Inc., reported net losses of $6.2 million (minus 6 cents/share), versus year-ago profits of $53.4 million (60 cents). Revenue fell to $160 million from $218 million and from sequential revenue of $162 million.

“During the first quarter, our operations team identified some opportunities to further enhance our silos to meet the evolving needs of increasingly demanding well completions,” said Rasmus. “We are retrofitting first generation silo equipment with upgrades and additional technology that will better serve our customers, and make a good system even better.

“Along with these equipment enhancements and our investments in technology, we continue to deploy additional Atlas top fill conveyors, which represent a significant innovation in the industry, allowing for quick unloading of hopper bottom trailers carrying up to 27 tons/truckload at the wellsite and maximizing delivered volume per truckload.”

For the second quarter, Hi-Crush expects total sales volumes to be 2.5-2.7 mmt, but sales prices may be “largely unchanged,” with a modest ramp in overall completions activity, as E&Ps continue to hold the line on capital allocation.