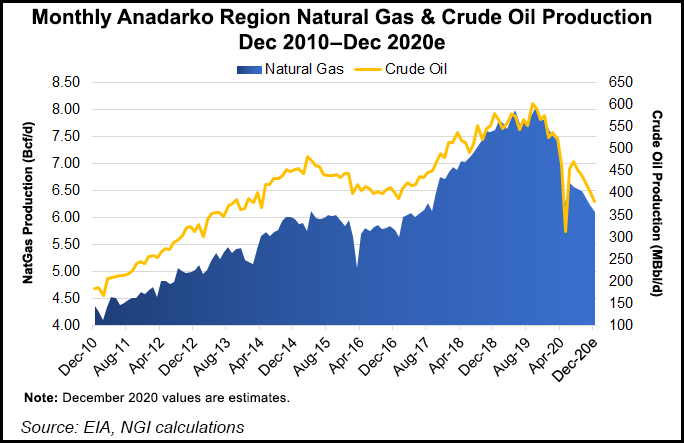 Both U.S. onshore-focused Maverick and FourPoint are majority owned and controlled by funds and accounts managed by Washington, DC-based EIG Global Energy Partners.

Under terms of the all-equity merger, FourPoint became a subsidiary of Maverick and was renamed Unbridled Resources LLC, EIG said.

The assets acquired by Maverick produce about 50,000 net boe/d (47% liquids) from Western Oklahoma and Northern Texas. The position spans 700,000 acres across the Granite Wash and Cleveland Sand plays, EIG said.

By renaming FourPoint to Unbridled, “we are signaling a shift from the traditional shale model to Maverick’s margin-focused operational strategy,” he added.

Maverick began operating under its current name in April 2018 after emerging from Chapter 11 as a successor to Breitburn Energy Partners LP. Breitburn had filed for voluntary bankruptcy in 2016. Since then, the private firm has focused on applying automation to minimize operating costs.

The company has said publicly this year – and again Wednesday – that it has an ongoing interest in mergers and acquisitions (M&A). “We are exceptionally well-positioned to acquire additional producing assets,” Heinson said.

Though consolidation in the energy sector has been relatively light in 2020 to date, expectations for more M&A developed as a dominant theme throughout the recent 3Q2020 earnings season, with expectations that stronger players would look to take out weakened competitors amid the shocks of the coronavirus pandemic. Companies across North America have struggled with steep losses, driven by weak oil and gas prices earlier this year and associated pullbacks in production. Several have filed for bankruptcy.

Through the end of the third quarter, 40 North American oil and gas producers filed for bankruptcy in 2020, collectively involving $53.9 billion in total debt, according to law firm Haynes & Boone LLP.

“Combined with the general lack of access to capital, additional filings are likely before 2020 comes to a close,” Haynes & Boone said in a November report.

Others to file for bankruptcy this year include Whiting Petroleum Corp., Chesapeake Energy Corp., California Resources Corp. and Chaparral Energy Inc. Chaparral has since emerged from bankruptcy as a privately-held firm.