Natural gas forwards markets abided by the old adage “what goes up must come down” as January prices plunged an average 44 cents between Dec. 9 and 15 on forecasts for milder weather to close out December, effectively putting prompt-month prices back to where they were at the start of the month, according to NGI’s Forward Look. 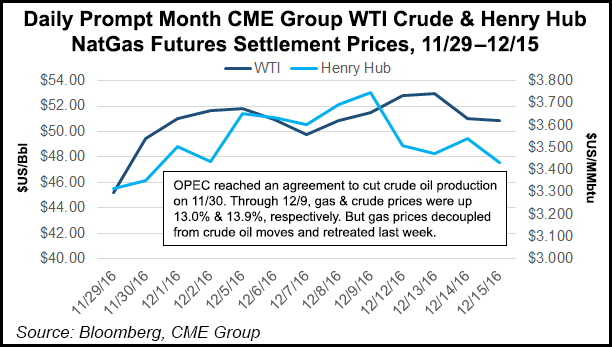 Nymex futures set the tone for the week’s hefty declines as the start of the week brought about the January contract’s first of two double-digit declines for the Dec. 9-15 period. The prompt month quieted down a bit during the middle of the week before plummeting another 10+ cents Thursday to settle at $3.434.

Transactional hedges, or producer selling associated with asset acquisitions, continues to weigh on the back end of the curve, analysts with Houston-based Mobius Risk Group said. “Since mid-October, calendars 2019-2021 have all drifted lower despite bullish sentiment at the front of the curve. It will likely take an end-of-March inventory level of less than 1.65 Tcf in order for bullish sentiment to be meaningfully transported to the 2018 strip,” Mobius said.

Analysts at the Coker Palmer Institute agreed that storage inventories are key to supporting the futures curve beyond the upcoming year. In order to lift natural gas prices in the “out years,” the market would need to see lower current inventories; fewer rigs added in 2017; decline curves starting to offset larger wells and less associated oil shale gas production, the investment securities firm said. “All factors are hard to envision happening next year,” Coker said.

Meanwhile, after surging some 84 cents over the past four weeks, January futures were inevitably bound to hit to a wall as part of the recent strength appeared to be tied to crude markets, which rallied following OPEC’s November announcement that it would cut 1.2 million b/d of production, effective Jan. 1.

“Both natural gas and crude were up between 13-14% following the OPEC announcement, but natural gas prices fell back last week,” NGI Director of Strategy and Research Patrick Rau said. So, I do think part of the recent run-up in gas prices was simple follow-on activity from the crude activity, meaning this past week was something of a market correction.”

Not helping the bullish case are weather forecasts that have become increasingly bearish for the end of December, even as outlooks for the upcoming week were the coldest the market has seen so far this winter. The reinforcing polar blast arriving over the weekend was seen to be quite frigid, with lows behind the Arctic front ranging from 0 degrees F to -25 degrees F, with single digits and teens deep into the southern Plains and northern Texas, according to forecaster NatGasWeather.

“We expect another round of wellhead freeze issues over the Rockies and Plains with this cold shot, which is likely to ease production some,” NatGasWeather said. “However, a milder break is still expected to arrive by the middle of [the] week through early the following week (Dec. 21-26) to ease demand considerably compared to current very strong levels.”

Data and analytics company Genscape said Spring Rock daily pipeline production estimates for last Friday continued to run in the 70.5 Bcf/d area. “We estimate there is roughly 0.38 Bcf/d of production offline due to freeze-offs. The bulk of those volumes are in the Bakken, with widespread declines in the Rockies on both sides of the Divide,” Genscape said.

The period after Dec. 27 is now the most important period, NatGasWeather said, and while it should play out active with weather systems traversing the country, the amount of cold Canadian air being entrained has only shown to be modest amounts. “This clearly disappointed the natgas markets who were obviously looking for something colder,” it said.

The weather data is quite muddled from Dec. 28 through Jan. 3rd, but the focus going forward is on when widespread subfreezing temperatures will return after the weekend’s polar blast. “The longer it takes, the more bearish. The sooner cold can return, the better opportunity for supply-demand balances to cash in on what should be viewed as a very tight structural environment,” NatGasWeather said.

Until then, bearish weather forecasts could send prices barreling through support levels at $3.40 and onto the next hurdle of $3.31, analysts at Bespoke Weather Services said.

The Nymex January contract finished Friday at $3.415, down 1.9 cents from Thursday.

“Much of these losses appear primarily weather-driven as overnight weather model guidance has turned increasingly bearish, especially with regards to American model guidance,” Bespoke said. “The GFS ensembles have now become some of the most bearish guidance through the next couple of weeks, and this seems to at least be playing some role in the move lower in prices thus far this morning.”

Not even extremely bullish storage news was enough to stop the speeding southbound train this week. The U.S. Energy Information Administration reported a 147 Bcf withdrawal from storage inventories for the week ending Dec. 9, far above market expectations in the mid-120s to 130 Bcf range. Inventories are now 50 Bcf below year-ago levels but still 186 Bcf above the five-year average of 3,620 Bcf.

Given the recent wave of polar air masses that have swept across the country over the last week and will continue to do so the next week, market insiders are looking to even stronger storage pulls when the EIA issues its next two reports. Whether those will offer natural gas markets a lifeline is anyone’s guess as market players appear to be laser-focused on end-of-month outlooks.

“The draw was pretty big, but we’re still 186 Bcf above the five-year average, so I suspect we’ve got to clear that out before people start really pricing in the storage figures,” said NGI’s Nathan Harrison, markets analyst.

Northeast pricing hubs bore the brunt of the market pain as several points lost upwards of $1 during the Dec. 9-15 period as demand is expected to wane after peaking early next week.

Genscape showed demand in New England reaching 3.65 Bcf/d on Monday and then sliding to 3.10 Bcf/d by Dec. 23. Appalachian demand was projected to hit 19.52 Bcf/d on Monday before sliding to 15.33 Bcf/d by Friday, the Louisville, KY-based company said.

New England’s Algonquin Gas Transmission citygates posted one of the steepest declines at the front of the curve this week as January forward prices tumbled $1.65 between Dec. 9 and 15 to reach $7.92, according to Forward Look. February forward prices also took a nosedive, plunging $1.57 to $8.13 while the balance of winter dropped $1.11 to $6.81.

Cash markets, meanwhile, were on a rollercoaster of their own as Algonquin prices averaged as high as $12.47 and as low as $5.77 during the same time period, NGI historical price data shows.

Genscape attributed some of the Algonquin weakness to constraints into the market that have been somewhat relieved. Tennessee Gas Pipeline has indicated the force majeure at Station 264 has been lifted, which creates more flexibility to bring in gas via the 200 line, it said.

Meanwhile, Genscape’s proprietary monitors show sendout from Everett LNG storage has been steady, and the company’s LNG group shows the vessel Gaselys (3.4 Bcf) is waiting in the Caribbean ready to deliver when Everett inventory draws down. Additionally, New England imports from Atlantic Canada via Maritimes have been flowing steadily southbound since Dec. 9, with nominated imports today reaching a 250-day high of 181 MMcf/d. Flows on Iroquois flipped on Dec. 13, so that gas is leaving New England, it said.