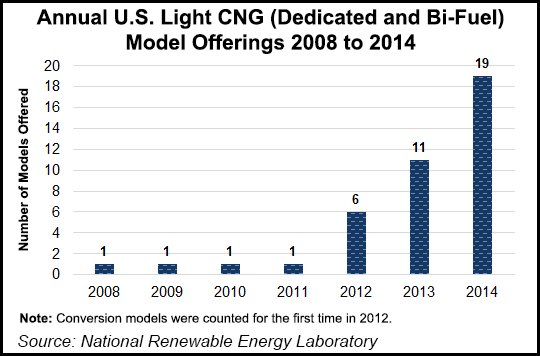 The new trucks will be available for orders this summer, and they go on sale next winter, a Ford spokesperson said, making the F-150 announcement at the annual Alternative Clean Transportation (ACT) Expo in Dallas. Ford has sold more than 57,000 vehicles prepped to operate on CNG and propane since 2009, said the spokesperson, claiming that sales total is “seven times more than all other major U.S. automakers combined.”

A survey by the automaker of its existing customers turned up that 72% indicated they wanted the F-150 with alternative-fuel capabilities. “We expect the gaseous-fuel prep package will be even more popular than it was on the 2014 F-150 with the 3.7-liter V6 engine,” said Jon Coleman, Ford’s fleet sustainability/technology manager.

Chicago-based ampCNG noted its own CNG fleet of Class 8 trucks has surpassed the 30 million mile mark in natural gas-fueled transportation, noting that its milestone helps to demonstrate the commercial and operational viability of CNG in heavy duty trucks.

Grant Zimmerman, senior vice president for business development said that ampCNG “doesn’t want to be in the trucking business, but we felt it was important to put these trucks on the road to prove CNG works for the [larger truck] Class 8 market.”

Meanwhile, Landi Renzo’s Torrance, CA-based U.S. unit said it plans to release for sale its state-of-the-art electronic pressure regulator (EPR) in the U.S. market. Calling it one of the most innovative NGV regulators in the industry, the company spokesperson said the advanced device will support the fuel flow rates required in heavy duty NGVs, offers improved cold-start capabilities, and has an improved design for improved vehicle packaging.

Other advantages for the latest pressure regulator are reliability in cold weather conditions, no heating required, closed loop control of output pressure, and extended ranges for the vehicles. It uses proprietary software for a control and diagnostic, integrated electronic control box.

“We are releasing a piece of innovative technology that will deliver immediate and tangible benefits to our customers by virtually eliminating several limitations affecting the conventional systems,” said Marco Genova, vice president of engineering for the Italian-based alternative fuel system supplier’s U.S. operations.