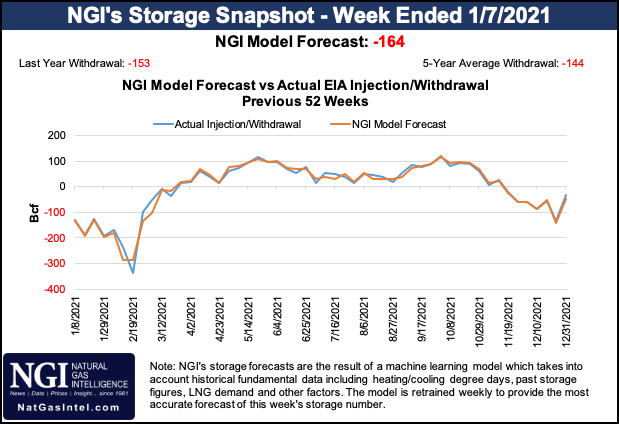 “So I’m not surprised at all to see these prices rise,” he told NGI.

EBW Analytics Group senior analyst Eli Rubin noted that production remained subdued from extended freeze-offs last week in the Permian Basin, MidContinent and the Rockies. He said output was curbed up to 4.0 Bcf/d nationally when compared to late 2021.

He expects output to recover as the week wears on. But, Rubin added, “if significant production freeze-offs extend into mid-month and the coldest January since 2014 continues to become harsher,” further price increases “cannot be ruled out.”

Models showed “a deep trough diving into the central/eastern U.S., easily the strongest modeled pattern we have seen this winter in terms of the ensemble output,” Bespoke said Monday. “Pattern signals do suggest colder risks into the final third of the month, before hinting at a possible return of the more classic La Niña base state into February.”

NatGasWeather viewed the latest outlook similarly, noting that the final third of January could prove “the coldest/most bullish setup” of the winter season to date, with Canadian air expected to move “aggressively” into the Lower 48.

“The focus will soon be on just how long” frigid temperatures during this time frame last, the firm said. It also noted that the cold temperatures could cause additional production freeze-offs, keeping supply below the highs around 96-97 Bcf recorded in December.

What’s more, U.S. LNG feed gas volumes held above 12 Bcf to start the week – near full capacity and within striking distance of recent records – reflecting solid demand from Asia and Europe. Both continents have entered the heart of winter. Europe, in particular, is light on supplies following extreme weather and robust demand in 2021. Modest flows of gas from Russia because of political strife between that country and Ukraine have compounded supply challenges for Europe.

“Much of the record feed gas demand has been from commissioning activity at Sabine Pass Train 6, which produced its first LNG in December and is on track to begin full service early this year,” Schneider added in a report Monday. “But beyond that, operators have been pushing the existing fleet of terminals to operate at peak levels and produce additional cargoes, likely for sale in the spot market or on short-term contract, an extremely profitable endeavor given the prices in Europe, where most if not all destination-flexible cargoes have headed.”

The export demand combined with winter conditions in the United States are expected to result in a triple-digit withdrawal from storage with this week’s Energy Information Administration (EIA) print.

For the next EIA report, scheduled for Thursday, NGI predicted a 164 Bcf withdrawal for the week ended Jan. 7. The year-earlier print was 153 Bcf, while the five-year average is a pull of 144 Bcf.

EIA last week reported a withdrawal of 31 Bcf natural gas from storage for the week ended Dec. 31. The result was far lighter than market expectations for a pull in the 50s Bcf. The five-year average was a 108 Bcf decrease in supplies.

NatGasWeather said storage reports for the first half of January should shrink the current inventory surplus to the five-year average. “And if the cold pattern Jan. 21-26 holds, as we expect, surpluses will flip to deficits in late January,” the firm said.

Fueled by gains in nearly every region of the Lower 48, spot prices advanced nationally on Monday.

Outsized jumps at hubs in the East serving markets that endured freezing overnight lows to start the week led the upward charge. Cove Point advanced $4.550 to average $12.000, and Transco Zone 5 gained $4.450 to $12.055.

Out West, where Californians have enjoyed mild temperatures early this year, prices advanced amid expectations for lows to dip into the 40s Tuesday and Wednesday. SoCal Citygate rose 36.5 cents to $5.250.

NatGasWeather said demand would likely be strong early this week as “a frigid cold shot” tracks across the Midwest and East with rain, snow and lows ranging from subzero to the 30s. “It will also be cool in the mornings over the southern U.S., with lows of 20s to lower 40s.”

However, the firm said, warmer conditions will return across much of the Lower 48 Wednesday through Friday, with highs of 40s to 70s aside from parts of the Midwest and New England.

Looking to next week, much of the United States is expected to be seasonal Jan. 16-19 “as a mix of weather systems and milder breaks sweep across the country.” But after that, cold air “will spread across the central and northern U.S.,” delivering frosty lows and galvanizing strong national demand.