A proposed regulatory overhaul of Mexico’s energy sector would cause havoc for private power generators as all of their supply contracts with non-state offtakers would be cancelled, according to analysts at Fitch Ratings Inc. 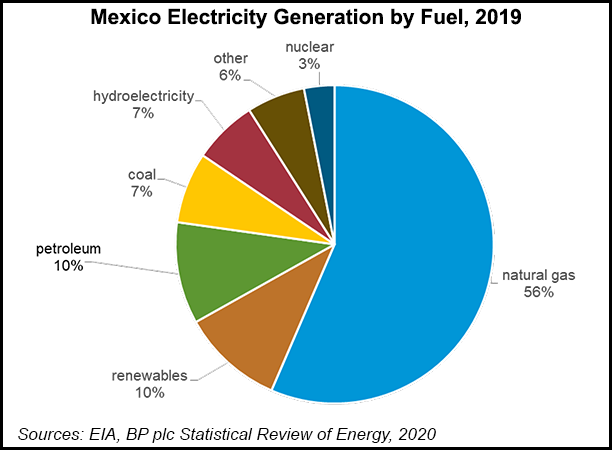 Through a bill sent to the lower house on Sept. 30, President Andrés Manuel López Obrador is seeking to restore the primacy of state-owned utility Comisión Federal de Electricidad (CFE) in the power market. The bill, if passed, would modify the constitution and upend the current merit-based dispatch rules, prioritizing plants owned by CFE.

“CFE would dispatch its power plants ahead of cheaper, more efficient generators following an economic order that considers production costs (i.e., variable plus capital costs) instead of just variable costs,” the analysts continued. “CFE would also be incentivized [to] restrict access to the network, limit the permits of new private generation companies (GenCos) and limit investment in new transmission lines to connect private GenCos, exposing them to curtailment risk.

The proposal would mandate that CFE supply 54% of the nation’s electricity, with private generators supplying the remainder. It also would cancel all private power purchase agreements (PPAs), with all generators being forced to sell their output to CFE.

If the measure succeeds, “Energy reforms passed in 1992 and 2013 would be reversed and full control of the electricity market would be given to [CFE],” the analysts said.

Currently, roughly 60% of Mexico’s electricity comes from private sector generators, “mostly through efficient gas-fired facilities and renewable energy sources,” the Fitch team said. “Under the new proposal, private power generation would be limited to 46% of the country’s load and must be sold only to CFE through bilateral contracts.”

The analysts added, “Not only would this introduce uncertainty to future demand and pricing, it could also result in more volatile cash flows, undermining long-term debt issuance.

“Debt may need to be restructured according to the new contracts, and issuers could see increased debt costs.”

The Fitch team noted that in order to become law, the reform bill must be ratified by two-thirds of the lower and upper houses of congress. This means López Obrador’s Morena coalition would need to secure votes from the opposition, “making the measure’s passage unlikely. But should it pass, credit implications would be significant.”

In addition, self-supply permits for large consumers “are unlikely to be renewed under the measure, and the spot market would most likely be dissolved, ending merchant revenues and further pressuring GenCos’ financial position,” the Fitch analysts said.

What’s more, cash flow for generators under the proposed regime “might not be enough to meet the investment returns required by equity investors,” they added. “Should projects end up in bankruptcy, equity capital would be wiped out, and lenders would take ownership of projects.”

Researchers cautioned that, “The proposal could further weaken Mexico’s rule of law and may discourage future private investments in the sector.

“Foreign investors from countries with settled bilateral investment treaties and free trade agreements with Mexico could challenge the law in international arbitration courts in an effort to protect their investments and receive monetary compensation.”

Among the largest private generators in Mexico is Spain’s Iberdrola SA, with some 9.1 GW of combined-cycle gas-fired plants and 1.2 GW of renewable capacity in operation.

Upon presenting its third-quarter results, Iberdrola management said that through the reform bill, “the state seeks to take total control over electricity, including all the activities in the value chain: generation, transformation, distribution and supply.”

The firm added that, “The involvement of private companies would be limited solely to generating electricity and then selling it to the CFE under a new modality of contracts that are not defined in the constitutional reform bill.”

Sempra CEO Jeffrey Martin, meanwhile, told analysts during a third-quarter earnings call that management sees “a low probability” of the bill passing. He noted that a final vote is not likely until at least April 2022.

The Baker Institute for Public Policy’s Tony Payan said at the US-Mexico LDC Forum in San Antonio, TX, that the reform reflects López Obrador’s agenda of energy nationalism. The overhaul would be “a disaster for Mexico,” Payan said, adding, “It disincentivizes all investment.”

López Obrador and CFE Director General Manuel Bartlett Díaz, meanwhile, have framed the reform as a path to rescuing CFE from the “neoliberal” policies of the last government, and of ensuring Mexico’s “energy sovereignty.”