Energy reforms by the Mexican government are good news for the state-owned petroleum company Petroleos Mexicanos (Pemex) and electric utility Comision Federal de Electricidad (CFE), but the benefits won’t not be immediate and CFE may face challenges from increased competition, according to analysts with Fitch Ratings. 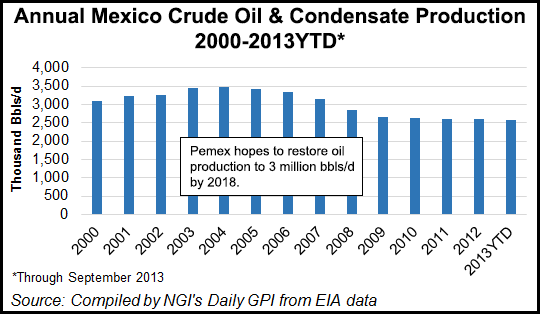 In a 10-page report released Tuesday, analysts Lucas Aristizabal, Xavier Olave and Sergio Rodriguez said although Pemex’s credit ratings would continue to be closely linked to those of the sovereign Mexican state, the reforms begun last year will increase the company’s financial flexibility through greater independence with its budgets.

“Until now, Pemex’s ability to invest has been hindered by high transfers to the central government and the need to obtain budgetary approval from congress on an annual basis,” the analysts said. “Going forward, the company will be able to partner with international oil and gas companies in order to share exploration risk and the investment burden.

“The overall impact for Pemex will be positive, but gradual, and the company will continue to face a heavy tax and royalties burden.”

Last August, President Enrique Pena Nieto unveiled an energy reform plan to Mexico’s Congress of the Union, including a proposal to open the nation’s energy industry to private investment. The reforms were designed to increase oil and gas production, decrease electricity costs and boost the country’s competitiveness. Congress approved the reforms in December, and they were swiftly enacted by a majority of Mexico’s state legislatures (see Daily GPI, Dec. 12, 2013; Aug. 14, 2013).

“This version calls not only for profit-sharing agreements, as initially expected, but also allows licensing, services contracts and production sharing agreements,” the analysts said. “Notably, the proposal also enables private oil and gas companies to book reserves according to SEC [U.S. Securities and Exchange Commission] regulations, although the oil in the ground will remain property of the government.

“The approved reform does not mention any changes in duties, which might be determined by the implementing legislation. However, it does note that the government expects to continue receiving revenues from the oil and gas industry in line with historical levels.”

Congress was given four months, or 120 days, to present secondary legislation to enact the implantation framework, the analysts said. Unlike a constitutional amendment, the legislation would only require a simple majority by lawmakers to pass.

“The regulatory framework will be the determining factor for the reform’s success as it will provide the economic framework to encourage private sector investment,” the analysts said. “The implementation legislation will determine the types of structures under which the government would grant E&P [exploration and production] contracts. [We expect] this legislation to [also] include the contract’s tenure, royalty schemes and local content requirements.”

The analysts took note that Mexico currently produces about 75% of its oil and gas from a few shallow-water offshore fields and that the Mexican Gulf Coast is largely unexplored. They added that despite the energy reforms, it “seems rather unlikely” that Pemex would increase production volumes above the current rate of 2.5 million b/d, “unless its annual cash capex [capital expenditures] is materially above the average US$15 billion invested during the last four years.

“The company’s investing capacity has been constrained by its limited budgetary flexibility and a high tax burden,” the analysts said. “Although the reform gives the company budgetary independence, increasing capex will be challenging for the company if the tax burden is not reduced.

“Pemex’s stated goal is to increase crude oil production to 3.0 million b/d by 2018, which requires a higher capex than otherwise historical levels. Over the short-term, it seems more likely that Pemex will fund capex with external borrowings rather than internal cash flow generation, given the level of cash transfers to the government.”

The analysts also said it was unlikely Pemex would lose any significant E&P fields as part of the energy reforms. During the first 90 days of the reforms’ passage, the company is required to submit a plan to Mexico’s energy secretary and the National Hydrocarbons Commission, detailing which E&P blocks Pemex chooses to continue operating.

“For this, Pemex needs to represent that it has the technical, financial and procurement capabilities to continue operating in such E&P areas,” the analysts said, adding that the energy secretary would then have 180 days to rule on Pemex’s request. “For the areas where Pemex had reported commercial discoveries prior to the approval of the reform, the company will be given [an] additional three years, extendable by two more years, to continue the exploratory efforts.

“In the event that existing E&P areas are not awarded to Pemex, the reform entitles the company to receive compensation in accordance to a valuation to be carried by the secretary of energy. The reform would also require that Pemex transfers its existing natural gas transportation infrastructure to the newly proposed National Natural Gas Control Center [CNCE] at prices that are to be decided by the secretary of energy.”

According to Fitch, Pemex’s production has “significantly decreased” during the last decade, largely due to low investment, high levels of cash transfers to the government and the fact that the company has been closed to foreign investment. Mexico has an estimated 159 billion boe of resources, with proved reserves of 13.7 billion boe. In the offshore, about 83% of current proved reserves are liquids.

“The rationale behind the ongoing energy reform is to attract private investors to increase the country’s oil and gas production,” the analysts said, adding that Pemex’s oil production rate of 2.5 million b/d was well below the peak production of 3.4 million b/d in 2004. “Oil supply and demand in the country have been recently tightening, which highlight the need to increase production in order to continue self-supplying [Mexico’s] liquid fuels energy needs.”

Fitch predicted that CFE would be impacted sooner by the energy reforms, due in part to the shorter amount of time it would take to build power plants versus developing oil and gas resources. The analysts estimated that independent power producers could be on the scene as early as 18-24 months after the reforms are enacted.