Cimarex Energy Co.’s first test of the Rogersville Shale appears to be a disappointment, a review of data released on Thursday by the Kentucky Division of Oil and Gas (KDOG) shows. 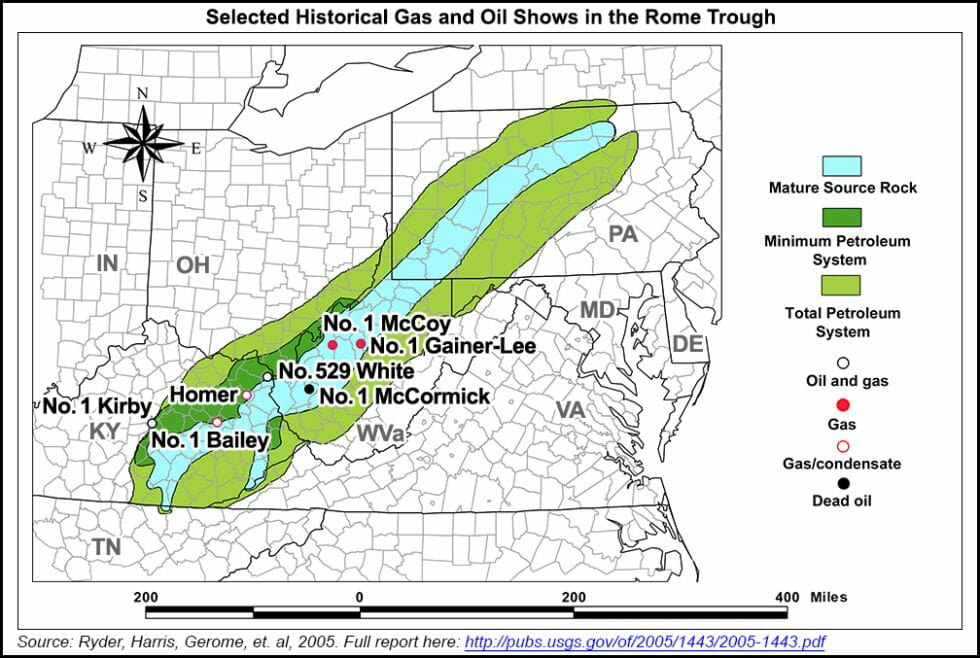 The vertical test of the formation in Lawrence County, KY, conducted by Cimarex subsidiary Bruin Exploration LLC is the first since the former Exxon Corp. cored the Rogersville in the 1970s. Cimarex’s Sylvia Young No. 1 well was first permitted as a stratigraphic test in 2013 before it was permitted for oil and gas production in February 2014. Under state law, the KDOG was barred from releasing a report for a year to protect the company’s proprietary information.

Although it’s unclear how long the well flowed given its permitting timeline, the completion report shows that the Sylvia Young was in operation for a little more than two months from March 2014 to May 2014, when it was shut-in. The report shows initial test volumes of just 19 b/d of oil and only 115 Mcf/d of natural gas.

“These are pretty low numbers; if they’re the true numbers,” said David Harris, head of the energy and minerals section at the Kentucky Geological Survey. He has been tracking progress in the Rogersville. “You never know if [the tests] are accurate or conservative. But they’re supposed to accurately represent what the well did.”

Cimarex has also permitted another production well farther to the south in Lawrence County. EQT Corp. affiliate Horizontal Technology Energy Co. LLC has also drilled a horizontal test well to the Rogersville in nearby Johnson County, but it remains unclear when the state is expected to release that completion report, Harris said. Chesapeake Energy Corp. was also issued a Rogersville production permit in Kentucky last month, while Cabot Oil & Gas Corp. has drilled a vertical test to the formation in Putnam County, WV (see Shale Daily, July 24; June 30).

Located in a deep sub-basin known as the Rome Trough, the Rogersville is one of six formations in the Conasauga Group, which also includes two other shales. There’s been limited production from the group south of Kentucky, but the organic-rich Rogersville is thought to be confined to Kentucky and West Virginia. Following the Sylvia Young test, much work remains to prove the economic viability of the play. At the very least, the test was more encouraging than those conducted early in the Utica Shale, where Devon Energy Corp. drilled and plugged a number of dry holes on what is now that play’s western edge.

“Certainly the numbers are much smaller than what people were anticipating or hoping for,” Harris said. “[The Sylvia Young] was listed as a gas well, yet it only shows 115 Mcf/d. If that’s the true rate after the frack, that’s not going to be an economic well. I guess the significant thing is they did produce liquids, produce oil. But the numbers were quite a bit smaller than what people were thinking.”

The Rogersville is generally expected to be a natural gas play in West Virginia and an oil play in Kentucky. The motivation for today’s interest in the formation was stoked by a series of documented wells drilled to the Rome Trough in the 1960s and 1970s with encouraging oil and gas shows.

In the mid-1960s, the Inland No. 529 White well drilled in Boyd County, KY — north of Lawrence County — yielded the first commercial oil production from Cambrian-age rocks in the sub-basin, producing 10,000 bbl of oil and associated gas from the Maryville Limestone. Another test well drilled to the Maryville in the Conasauga Group in Jackson County, WV, produced natural gas at 6-9 MMcf/d, according to research by the U.S. Geological Survey.

Cimarex’s first vertical well was stimulated with 16,113 barrels of completion fluids and 598,509 pounds of sand, or far lower volumes compared to those used in unconventional completions. The well was drilled to a total depth of 12,169 feet.

Cimarex, EQT, Cabot and Chesapeake have not commented about their exploration efforts in the Rogersville.