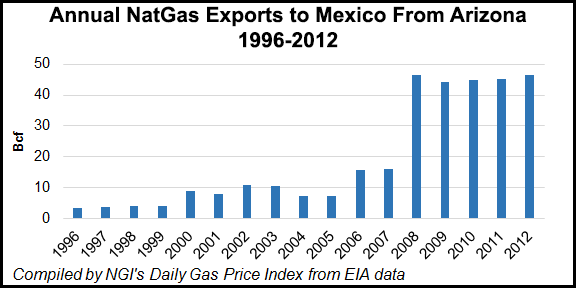 The recommendations will be taken into consideration by commissioners when they make a decision on the proposed international project.

Construction and operation of the project “would have some adverse environmental impacts, but most of these impacts would be reduced to less-than-significant levels,” according to the Federal Energy Regulatory Commission staff report. Sierrita would minimize impacts on natural and cultural resources during construction and operation by implementing a series of mitigation plans, and FERC would complete Endangered Species Act consultations with the Fish and Wildlife Service and follow up on other environmental and cultural protections, staff said.

The Sierrita Pipeline project (formerly known as the Sasabe Pipeline project) calls for the construction of a 61-mile, 36-inch diameter lateral from El Paso Natural Gas’s system in Arizona to a point south of Tucson near the international border at Sasabe, AZ. El Paso is owned by Kinder Morgan. The project, which has an estimated capital cost of about $204 million, will have the capacity to deliver 200 MMcf/d of gas (see Daily GPI, April 16, 2013). Associated facilities would include two meter stations, two pig launchers and two pig receivers, and six mainline valves.

The Sierrita Pipeline would interconnect with Sempra Energy’s proposed Sasabe-Guaymas Pipeline at the U.S.-Mexico border to supply gas to power generators in northern Mexico.

Sierrita had called on FERC to act on its application by Feb. 7. Assuming regulatory approval, Kinder plans for construction to begin in the second quarter, with startup by Sept. 30, which is the same in-service date as the Sasabe-Guaymas Pipeline in Mexico. Sierrita planned  to execute a 25-year transportation service agreement with MGI Supply Ltd. for the full design capacity of the project. MGI Supply is a unit of Pemex Gas y Petroquimica Basica (Pemex), Mexico’s state-owned gas company.

The U.S. Department of Interior (DOI) has requested that FERC look at alternative routes for the Sierrita project, which DOI said could have impacts on the Buenos Aires National Wildlife Refuge in the southern portion of the Altar Valley (see Daily GPI, Jan. 21). Environmental groups have also asked FERC to force Kinder Morgan to look at alternative routes (see Daily GPI, Dec. 19, 2013).

The U.S. consistently exported 44-47 Bcf of natural gas to Mexico from Arizona between 2008-2012, a significant jump from previous years, coinciding with the beginning of the domestic shale gale.