Bernard L. McNamee, who earlier this year said he did not plan to seek another term at FERC, said Wednesday he intends to step down on Sept. 4. 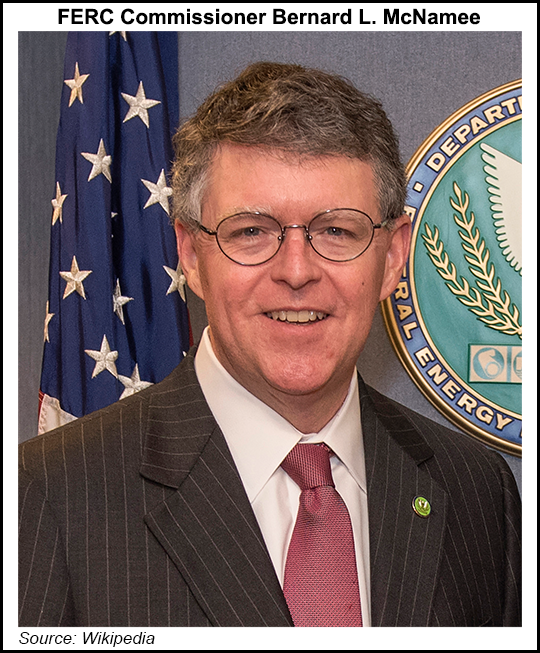 McNamee in January had indicated he would step down from the Federal Energy Regulatory Commission at the end of his term, which expired June 30.

“Since I announced at our January meeting that I would not be seeking another term, I have continued to work diligently and tirelessly on the important work of the Commission,” McNamee said. “After I leave, I will take some time off and search for a job.”

Serving on the Commission, McNamee said, “has been an incredible honor and an experience for which I am extremely grateful. I thank President Trump for having nominated me and the Senate for having confirmed me.”

McNamee indicated he would “have more to say before I leave, but needless to say, I thank the Chairman, my fellow commissioners, my advisers and staff, the staff of the Commission, and all of the FERC community for their support and friendship.”

FERC, which traditionally has five members, now has only four. McNamee, a Republican, now serves with Chairman Neil Chatterjee and James Danly, both Republicans, and lone Democrat Richard Glick.

Last month President Trump said he intended to nominate two people to the Commission, one Republican and one Democrat.

Mark Christie, the current chairman of the Virginia State Corporation Commission, if confirmed by the Senate would take one of the GOP slots.

Democrat Allison Clements, the founder and president of energy policy and strategy consulting firm Goodgrid LLC, would be nominated to take another position, if confirmed.

Christie previously was president of the Organization of PJM States Inc. and served on the board for more than a decade. He was also elected president of the Mid-Atlantic Conference of State Utility Regulators.

Clements worked for a decade at Natural Resources Defense Council in New York as the organization’s corporate counsel and then as director of the Sustainable FERC Project. She also was director of the energy markets program at the Energy Foundation. She also spent several years in private legal practice with the energy regulatory group at Troutman Sanders LLP (now Troutman Pepper) and then with the project finance and infrastructure group at Chadbourne & Parke LLP (now Norton Rose Fulbright).