FERC announced Tuesday that it will complete its environmental assessment (EA) of the Eastern Market Access Project by mid-June. It set a late September deadline for other agencies to issue any applicable federal authorizations for the project. 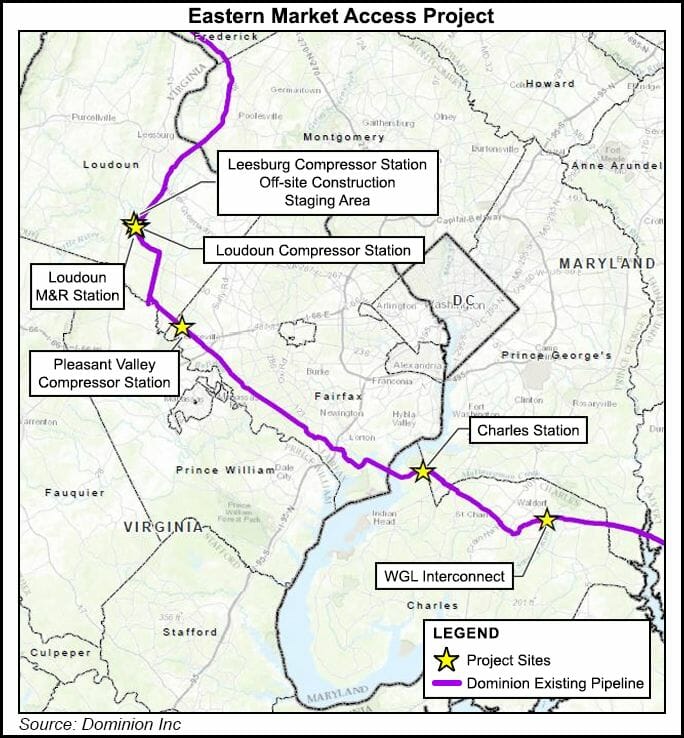 Last November, Dominion Cove Point LNG LP (DCP), a subsidiary of Dominion Resources Inc., filed an application with the Federal Energy Regulatory Commission for the $147.3 million project [CP17-15]. It calls for the construction of facilities, as well as upgrades to existing infrastructure, in Maryland and Virginia in order to provide 294,000 Dth/d of firm transport capacity to two electric utilities.

Three months after the filing, FERC said it would conduct an EA for the project. In a notice Tuesday, the Commission said its staff plans to issue the EA by June 27, and that federal agencies will have an additional 90 days — until Sept. 25 — “to complete all necessary reviews and to reach a final decision on the request for a federal authorization [of the project].”

Washington Gas Light Co., a unit of WGL Holdings Inc., and Mattawoman Energy LLC have entered into binding precedent agreements for all of the project’s capacity, with primary terms of 20 or 25 years under DCP’s existing rate schedule FTS.

The project also calls for re-wheeling a compressor on one existing 17,400 hp electric unit at DCP’s existing Pleasant Valley Compressor Station in Fairfax County, VA, and constructing two delivery taps — one on Pipeline TL-522, the other on Pipeline TL-532 — to serve as a new WGL interconnect in Charles County.

DCP proposed starting construction in November to meet an in-service date for the contracted firm transportation service by Sept. 1, 2018. The Dominion unit has asked FERC to issue a final certificate order approving the project by this September, but it’s unclear how the project will be affected by the ongoing lack of a quorum at FERC. That issue became more challenging last week after Colette Honorable announced she would leave the Commission after her term expires on June 30.

FERC Chairman Richard Glick has been outspoken in calling for more thorough reviews of natural gas projects under the Commission’s jurisdiction, particularly when it comes to greenhouse gas (GHG) emissions, but that doesn’t mean he’s against pipelines. The Democrat, promoted in January to chair the Federal Energy Regulatory Commission by the Biden administration, said during…