Rockies Express Pipeline LLC (REX) received a certificate of public convenience and necessity from FERC Thursday to allow the company to open its existing Seneca Lateral to transportation service under the federal Natural Gas Act (NGA). 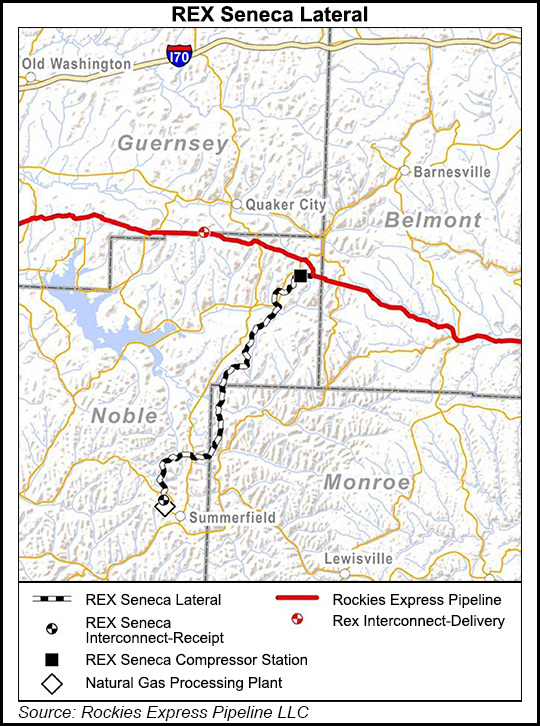 The Federal Energy Regulatory Commission ruled that REX’s proposal to change its authorization from Section 311 of the Natural Gas Policy Act (NGPA) to Section 7 of the NGA, which would not involve any new construction, would not harm REX’s ability to serve existing customers and would “broaden the range of transportation services that can be provided on the facilities.”

After originally constructing the Seneca Lateral under section 311 of the NGPA, which limits the lateral to intrastate or local distribution company shippers, REX applied for a certificate under FERC’s NGA jurisdiction on March 2, 2015.

REX currently has a shipper on the Seneca Lateral with a 20-year contract for 600,000 Dth/d, according to FERC. The section 7 certificate would allow the pipeline to market to anyone interruptible service for capacity not in use.

The 14.7-mile Seneca Lateral runs from MarkWest Energy Partners LP’s Seneca Processing Plant in Noble County, OH, to a nearby interconnection with the REX mainline.

REX initially placed the Seneca Lateral into service in June 2014, installing additional compressor units to bring the total capacity up to 600 MMcf/d by January 2015.

Since the application would not involve additional construction, FERC did not conduct an environmental assessment of REX’s proposal.

Tallgrass Development LP now owns a 75% stake in the 1,698-mile REX, which stretches from northwestern Colorado and Wyoming to eastern Ohio, after paying $440 million to a unit of Sempra Energy to acquire its share of the pipeline (see Daily GPI, March 30).