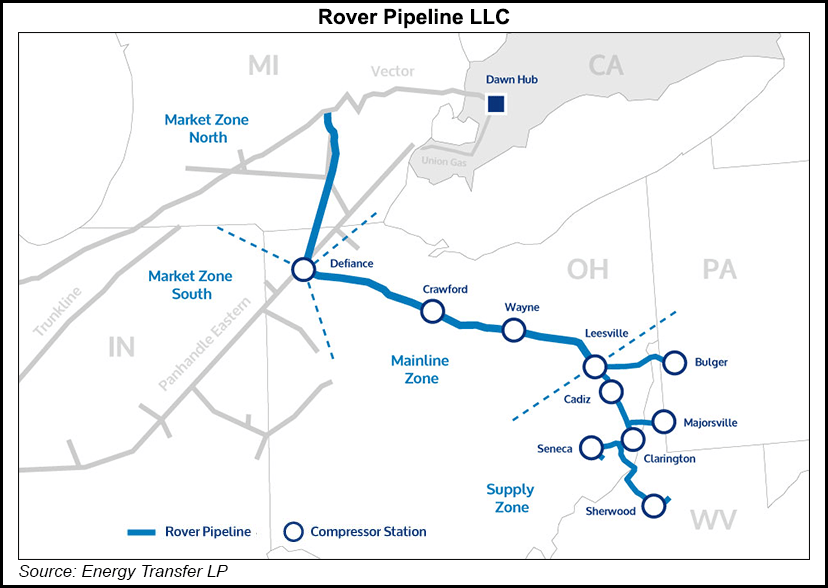 The Federal Energy Regulatory Commission handed down a show cause order during last week’s monthly meeting, formalizing its intent to impose the fine based on the findings of its Office of Enforcement.

After an investigation, enforcement staff determined that Rover contractors “intentionally and routinely” added diesel fuel and other unapproved substances to the drilling mud to speed up completion of the Tuscarawas HDD during construction of the 711-mile Appalachia-to-Midwest natural gas conduit.

Rover also failed to properly monitor the right-of-way at the HDD site, and the developer improperly disposed of contaminated drilling mud, according to FERC.

The Tuscarawas HDD was the site of an inadvertent release of 2 million gallons of drilling mud that reached the surface and impacted a nearby wetland, regulators found. The incident resulted in construction delays and additional regulatory scrutiny for Rover, including the start of FERC’s enforcement investigation after test results indicated the presence of diesel fuel in the drilling mud.

Energy Transfer, for its part, through a spokesperson denied knowing that diesel fuel was being used at the Tuscarawas HDD site.

“There is no evidence that shows anyone at Rover Pipeline or Energy Transfer had any knowledge of, or involvement in the use of diesel fuel at the horizontal directional drill in question,” spokesperson Vicki Granado said in an email. “Energy Transfer did not direct this action. In fact, Energy Transfer learned many months later that a rogue employee of an independent subcontractor admitted under oath to have committed this act on his own volition and then tried to hide it.”

Granado added that the operator has “restored the affected area to pristine conditions” and that Rover would be seeking “full recovery” of any fines or penalties under “an indemnity agreement in place with the contractor responsible” for the HDD.

In its order, FERC said it had not received a response from the pipeline operator “to the substance” of the allegations and noted that the Natural Gas Act makes the developer “solely responsible” for the actions of its contractors.

“Rover, as the certificate holder, is responsible for any violations of the Certificate Order,” the order states. “It is well-established that a company can be held liable for the actions of its agents, including contractors and their employees, and thus Rover cannot escape liability” by pointing the finger at those it hired to carry out the HDD.

The proposed Rover fine comes as FERC Chairman Richard Glick has made it a priority to step up the agency’s oversight of the energy sector.

“I have long said that the Commission will remain vigilant in ensuring that the holder of a certificate of public convenience and necessity is in full compliance with every condition of that certificate,” Glick said of the Rover enforcement action. “I commend the Office of Enforcement staff for taking this important step to ensure the Commission has a full record in this matter.”

To that end, FERC also last week ordered Midship Pipeline Company LLC to respond to findings that the developer violated its certificate by not properly restoring the right-of-way along its 200-mile Midcontinent Supply Header Interstate Pipeline Project in Oklahoma.

The agency cited evidence submitted by landowners indicating the developer “may not have removed construction debris and rocks along various tracts,” which would violate the environmental conditions laid out by FERC in its authorization of the project.

“When the Commission issued its order on March 18, 2021, directing Midship to quickly resolve the outstanding restoration issues along the right-of-way, I stated that it was well past time for Midship to promptly resolve these matters and allow the landowners to move on with their lives,” Glick said. “While progress has been made on some tracts of land, it is simply not enough.  Today’s orders further demonstrate that the Commission takes violations of environmental conditions set forth in its certificates seriously and dutifully considers and responds to the concerns and complaints of landowners.”