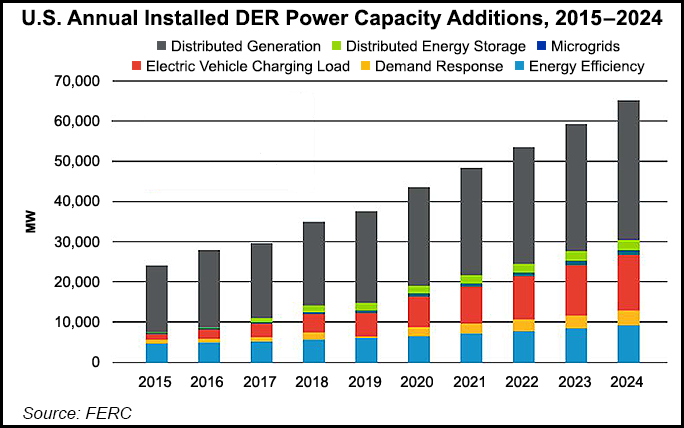 DERs are small-scale power generation or storage technologies (typically from 1-10,000 kW) that provide an alternative or an enhancement of the traditional electric power system. They include “everything from rooftop solar panels and storage resources, to demand response and energy efficiency resources, such as grid-enabled water heaters, and even electric vehicles and their supply equipment,” Chairman Neil Chatterjee said during the regular meeting of the Federal Energy Regulatory Commission to discuss the final order (RM 18-9-000).

“DERs can hide in plain sight in our homes, businesses, and communities across the nation. But their power is mighty,” as “some studies have projected that the United States will see 65 GW of DER capacity come online over the next four years, while others have even projected upwards of exceeding 380 GW by 2025.

“While these estimates and analytical frameworks vary, there’s no doubt that investments in these advanced technologies will only accelerate in the years to come, continuing the seismic shifts we’re seeing in our energy landscape.”

Approving Order 2222 “is designed to capitalize on those shifts, allowing us to meet the moment and develop the grid of the future,” Chatterjee said.

Under the latest order, DERs would be allowed to participate alongside traditional resources in the wholesale capacity, energy and ancillary services markets. Multiple DERs also may aggregate to satisfy minimum size and performance requirements, which they might not meet individually.

FERC is breaking new ground, Chatterjee said, moving the United States “toward creating the grid of the future, by knocking down barriers to entry for emerging technologies. By relying on simple market principles and unleashing the power of innovation, this order will allow us to build a smarter, more dynamic grid that can help America keep pace with our ever-evolving energy demands.”

The new rule builds off of a recent ruling on related FERC Order 841 by the U.S. Court of Appeals for the District of Columbia Circuit. The appeals court affirmed the Commission’s exclusive jurisdiction over wholesale markets and the criteria to participate in them.

“Because DERs are nimble, more so even than many traditional resources, they can locate where price signals indicate they’re most needed,” Chatterjee said. “This can, for instance, help reduce congestion costs, driving down prices for customers. That means smaller energy bills for hardworking families and businesses of all shapes and sizes.”

As an example, said the chairman, estimates by the Edison Electric Institute show there could be close to 19 million electric vehicles (EV) on the road in the United States by 2030.

“When those vehicles are charging, say, in our garages, they amount to a significant energy resource that could over time, using the power of advanced technologies, be managed through aggregations to provide a range of services in our organized energy markets. They could provide energy and spinning reserves, or even frequency regulation.

“By unleashing the power of EVs in this way, we have the ability to further drive down costs in our markets and bolster grid resilience. That’s to say nothing of the added benefit of emissions reductions we could see from increased EV deployment.”

Commissioners “always talk about being ‘fuel neutral’ when it comes to our actions,” Chatterjee said. The rule being issued is “just as importantly, ‘technology neutral.’ Now, that’s a really critical component of this final rule, because it means it’s built for the future and will allow us to continue to evolve and adapt as emerging technologies and capabilities develop.”

Under the order, retail regulatory authorities would be prohibited from broadly excluding DERs in participating in the regional markets. Regional grid operators also would be prohibited from accepting bids from aggregating customers of a small utility unless the regulatory authority for the utility allows participation. The final rule also respects the ability of retail regulators to prohibit retail customer demand response from being bid into regional markets by aggregators.

The final rule is to be enacted 90 days after it is published in the Federal Register. Within nine months of taking effect, grid operators would be required to submit to FERC a plan to implement the final rule.