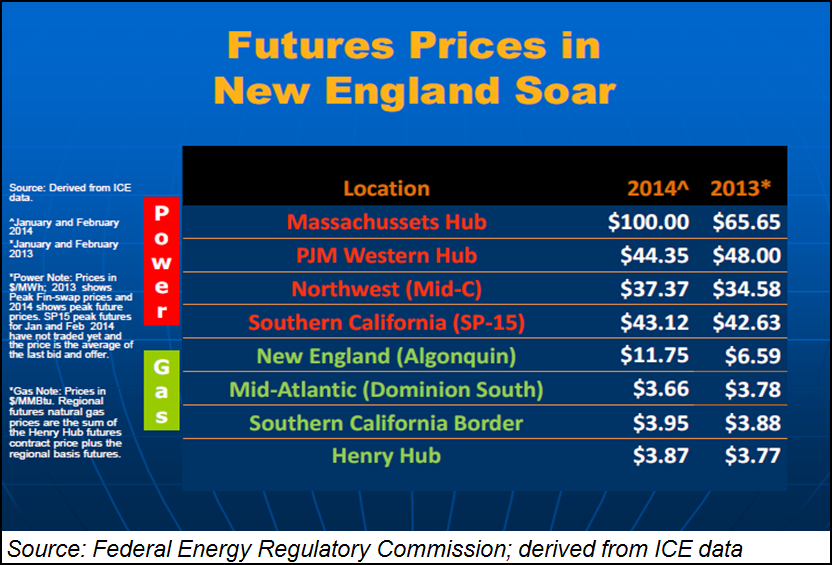 “Current spot and futures market natural gas prices remain relatively low in most regions of the country and natural gas storage levels are in line with the five year average,” according to the staff report. “Electricity prices are expected to track the natural gas market prices.

“U.S. natural gas production continues to increase, driven by strong growth in the Northeast and from natural gas liquids-rich production areas, such as the Eagle Ford Shale in Texas.”

With the exception of localized spikes during periods of high demand, natural gas prices aren’t expected to increase significantly this winter, according to the report. Futures prices for gas and power are “generally comparable to last year’s low prices,” FERC staff said.

A recent study concluded that New England’s natural gas infrastructure will be increasingly under pressure from demand growth from the power sector in coming years, with 11 of 14 sub-regions expected to exceed constraint capacity levels on more than 30 days/year under the current infrastructure (see Daily GPI, Sept. 30). The region faces a decade of narrowing physical gas basis prices, with natural gas from the Deep Panuke project offshore Nova Scotia expected to push down Algonquin Gas Transmission’s basis to Henry Hub.

The Northeast has become heavily gas-reliant and preliminary estimates call for the Northeast to replace as much as 6.2-9.8 GW of coal-fired capacity with gas by 2015.

A recent FERC quarterly update of various regional efforts to coordinate natural gas and electric markets showed that the New England and Northeast generation markets will continue to be the most gas-dependent during the upcoming heating season.

Early forecasts have painted a picture of a generally mild winter this year. Weather Services International (WSI) recently said it expects temperatures to average cooler than normal from the Northern Plains into the Ohio Valley through the end of the year, with above-normal temperatures elsewhere, particularly across portions of Texas and the Southwest (see Daily GPI, Sept. 25). Forecasters at the Farmers’ Almanac, on the other hand, expect the winter will be colder than normal for most of the United States, including New England, a forecast that would have furnaces working overtime in some of the nation’s largest population centers (see Daily GPI, Aug. 27).

The National Oceanic and Atmospheric Administration (NOAA) is expecting a normal winter over the eastern consuming region this year. Based on that forecast, FERC staff “expects that residential and commercial natural gas demand would be comparable to last year, particularly in the Northeast.

“However, there is a high degree of uncertainty associated with this forecast since NOAA’s earlier expectation of an El Nino event this winter is on hold. Data that once showed growing signs of an El Nino — a warming of the water in the Pacific Ocean that generally brings wet winter weather to the south and warmer-than-normal temperatures to the northern tier of the country — are now becoming more neutral.”