Natural gas production is increasing while natural gas trading activity is declining, according to recent reports from the Energy Information Administration (EIA) and the Federal Energy Regulatory Commission. 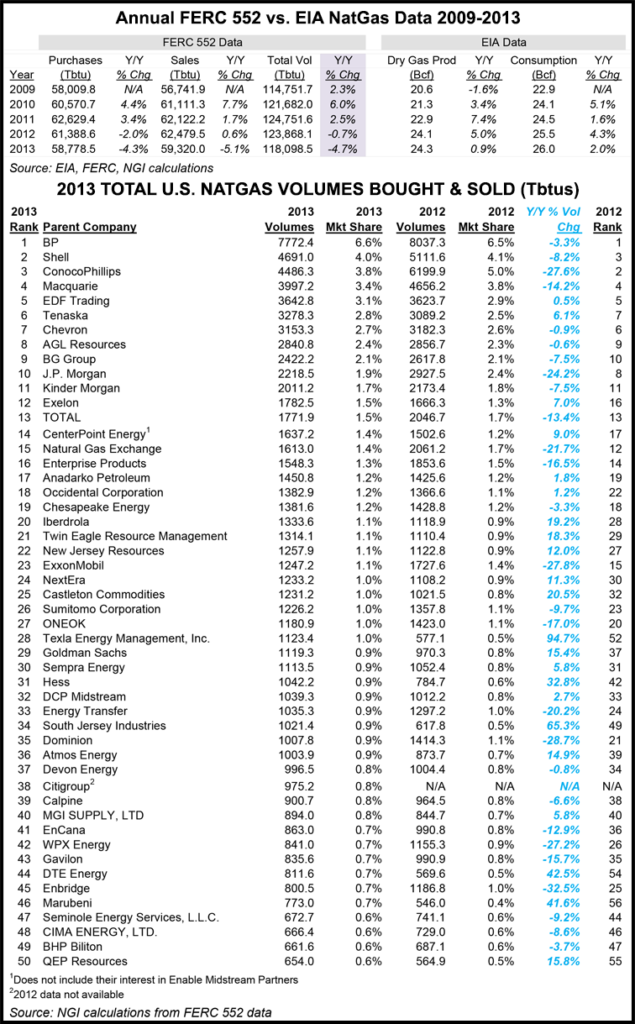 However, according to NGI‘s analysis of recent company submissions of FERC 552 Annual Report of Natural Gas Transactions data, total transacted natural gas volumes in the U.S came in at 118,099 TBtu in 2013, down 4.7% from the prior year. That comes on the heels of a 0.7% year-over-year decline in those data in 2012 (see Shale Daily, June 4, 2013).

BP plc remained the most active company in 2013, even though its volumes declined 3.3% year-over-year to 7,772 TBtu. In fact, eight of the top 10 companies experienced volume declines last year according to FERC data. Only EDF Trading (up 0.5%) and Tenaska (up 6.1%) saw increased volumes among the top 10 companies.

Shell swapped places with ConocoPhillips to take over the No. 2 position on the chart. No company fell out of the top 10 in 2013.

Texla Energy Management (28), Citigroup (38), DTE Energy (44), Marubeni (46), and QEP Resources (50) were all newcomers to the Top 50 in 2013. Dropping out were Deutsche Bank, Cargill, EOG Resources, Bank of America/Merrill Lynch, and Southern Company.

“The fall-off in trading is not surprising,” said Pat Rau, NGI director of strategy and research. “Both a decrease in volatility which translates to a decrease in trading profitability and the number of marketers and banks getting out of the commodity trading business have contributed to the lower trading volumes.”

Barclays was the most recent bank to drop out of physical commodities trading (SeeDaily GPI, April 23).

Boardwalk Pipeline Partners LP cited the negative impacts that the lack of price volatility has had on its business as a major culprit behind its decision to slash its distribution (dividend) by 81% earlier this year (see Daily GPI, Feb. 10).

The FERC 552 survey is not an attempt to measure production since a single parcel of gas may go through multiple transactions from wellhead to burner tip. Nor does FERC attempt to capture 100% of all market deals. Buyers and sellers are only asked to report spot price transactions that either use an index or are qualified to contribute to an index.

On fixed-price trades participants only are to report their fixed-price spot market transactions for physical gas that meet the restrictive criteria set out by index publishers in their day-ahead and monthly price surveys.

FERC documents reveal that only 1,219 companies submitted page 3 of the form, which is the Schedule of Reporting Companies and Price Index Reporting section of the form. That is far fewer than the number of U.S. companies that either buy or sell natural gas. According to U.S. Census data, there are currently nearly 7,000 oil and gas producers in the United States alone.