FERC on Wednesday cleared the embattled Mountain Valley Pipeline LLC (MVP) project to resume construction along the first 77 miles in West Virginia, enough to add an incremental 1 Bcf/d of service, but with much of the project still stalled, MVP on Thursday announced a massive workforce reduction. 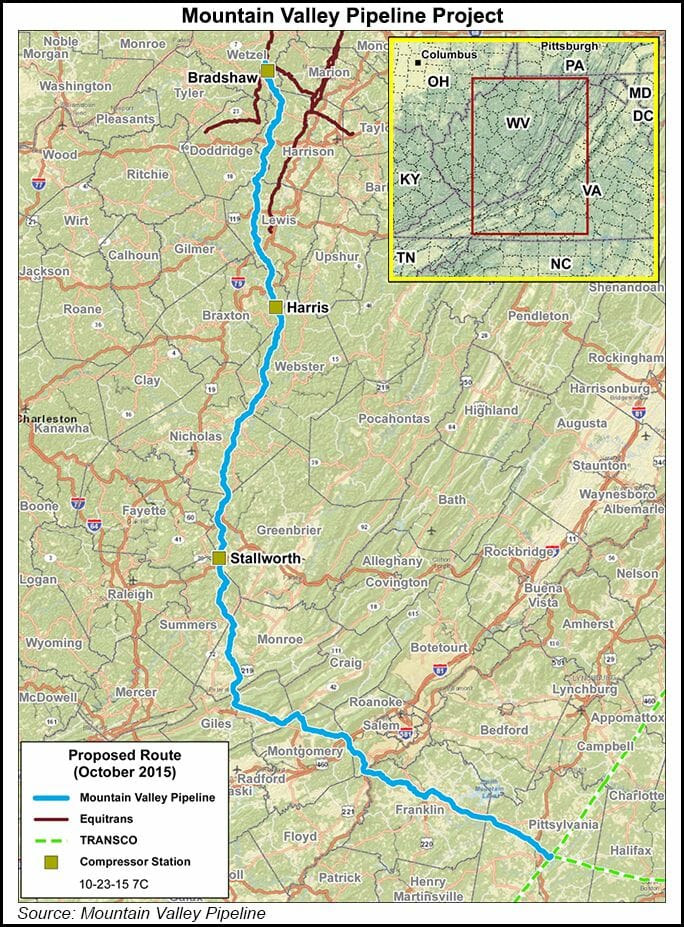 The developer said it now expects the project to enter full-service in 4Q2019, a delay of roughly nine months from the previous target of early 2019 announced during a recent conference call.

In a letter to the Federal Energy Regulatory Commission Tuesday, MVP argued that halting construction along the entire 303-mile project route was unnecessary to fully comply with the U.S. Court of Appeals for the Fourth Circuit’s recent decision. The court vacated and remanded approvals from the U.S. Forest Service and Bureau of Land Management (BLM), required for MVP’s proposed crossing of the Jefferson National Forest.

Citing the progress made to date and the potential environmental impacts, MVP urged the Commission to “modify the stop work order to limit the impact of the work stoppage to only those areas that may be potentially affected by the decisions of the Forest Service and BLM on remand.”

MVP proposed finishing a segment from Milepost 0 to Milepost 77, excluding a seven-mile area near the Weston Gauley Bridge Turnpike Trail. This segment from MVP’s starting point in Wetzel County, WV, to Columbia Gas Transmission’s WB Interconnect “has independent utility from the rest of the MVP Project and could be placed into service even if the rest of the Project is never constructed,” according to the operator.

“Upon additional review, staff has determined that approximately 80% of the right-of-way from Milepost 0 to Milepost 77 has been cleared,” Turpin wrote Wednesday. “Not only have trees been felled in this area, but much of the right-of-way has been disturbed and graded…After careful consideration, and with the goal of protecting the environment to the maximum extent possible while the relevant agencies determine how best to comply” with the federal appeals court’s decision, “staff concludes that allowing completion of construction, including full restoration…in this limited area is the best option.

“Maintaining the status quo would result in significant areas being subject to erosion and soil movement for an indeterminate period, possibly negatively affecting plant and wildlife habitat and adjacent waterbodies,” and immediate restoration could result in “the same areas having to be disturbed twice, if construction is later reauthorized,” Turpin said.

Even with FERC’s sweeping Aug. 3 stop work order reduced in scope, MVP announced Thursday that it has reduced its construction workforce by as much as 50% as the project languishes in regulatory limbo.

“Despite the construction activities authorized under the modified work order and the FERC-approved stabilization plan, MVP was forced to take immediate measures to address an idled workforce and protect the integrity of the project,” the operator said. “MVP is working to mitigate any additional job loss; and we believe we are making progress to receive authorization to resume full construction activities and return the currently released workers back to their jobs.

“Constructing the Mountain Valley Pipeline in the safest manner possible; minimizing impacts to sensitive species and environmental, cultural, and historic resources; and ensuring the highest levels of environmental protection remain our top priorities. As we continue working closely with the agencies to clarify and resolve the issues related to the stop work order, we appreciate the FERC’s responsible review and consideration of the modified work order and look forward to continuing the safe construction of this important infrastructure project.”

MVP’s statement could serve as the latest salvo in a war of public opinion over a project that has faced relentless opposition from environmental groups and many landowners, as well as some politicians. The proposed 2 Bcf/d Appalachia-to-Southeast project has also been the subject of dissenting opinions at FERC.

Prior to the announcement, MVP warned FERC that “thousands” of the roughly 6,000 jobs currently supported by the project could be cut under an extended shutdown.

“Thousands of workers and dozens of communities are in need of certainty as soon as possible with respect to these two projects,” the West Virginia delegation told FERC. “…As our state continues to face economic challenges, natural gas infrastructure creates economic activity that offers good-paying jobs and tax revenue for communities in need. Along with our fellow West Virginians, we believe strongly in the environmentally responsible development of our natural resources and infrastructure.”