FERC Commissioner Philip Moeller whose term ends this year plans to resign from the regulatory agency at the end of the month, he said Tuesday.

Moeller, a Republican, joined the Federal Energy Regulatory Commission in 2006 after being nominated by then-President Bush and winning confirmation by the Senate (see Daily GPI, July 25, 2006; July 17, 2006; March 9, 2006). Initially elected to finish the remainder of former FERC Chairman Pat Wood’s five-year term that expired in 2010, Moeller was appointed to another five-year term by the Senate in 2010 (see Daily GPI, June 23, 2010).

To illustrate how much has changed since the shale revolution, during his first Senate confirmation hearing in 2006, Moeller said the United States should consider importing liquefied natural gas (LNG) from foreign countries like Qatar to supplement domestic gas supplies (see Daily GPI, June 9, 2006).

“I thank my colleagues for all of their hard work in improving the energy industry, members of the public who help inform our decisions, and the staff at FERC for their dedication and support throughout my two terms, especially the members of my office team,” Moeller said Tuesday. “FERC is an amazing agency, and I have been honored and privileged to have had the opportunity to serve our nation as a FERC commissioner.”

Moeller said he plans to “pursue other opportunities in the energy field” after leaving FERC. Since his departure leaves only one Republican, Tony Clark, on the five-member panel, Moeller’s replacement will have to be a Republican.

Before his tenure at FERC, Moeller served as executive director of the Washington office for Wisconsin-based Alliant Energy Corp., and also worked in the Washington office of Calpine Corp. He was also an energy policy adviser to former Sen. Slade Gorton (R-WA), and had been a staff coordinator for the Washington State Senate Committee on Energy, Utilities and Telecommunications.

Moeller managed to raise the ire of the natural gas sector last year after calling an unusual meeting — where he was the only commissioner in attendance — to discuss a possible restructuring of gas markets (see Daily GPI, Oct. 2, 2014; Sept. 19, 2014). The full Commission later voted out an order that made minor changes in the daily natural gas schedule while several of the electric regional transmission organizations revised some of their rules to make it easier for generators to purchase supplemental power (see Daily GPI, April 16). 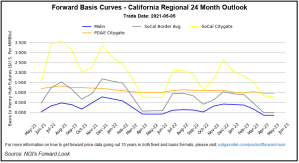 Shoulder-season doldrums took hold of natural gas forward curves for the trading period ending May 5 as mild weather stole some of the momentum away from strong export demand. June forward prices averaged exactly flat for the period amid a mix of small gains and losses, while the balance of summer (June-October) eked out a…