FERC commissioner and former Chairman Kevin J. McIntyre, who had been battling cancer since 2017, died Wednesday, Jan. 2. He was 58. 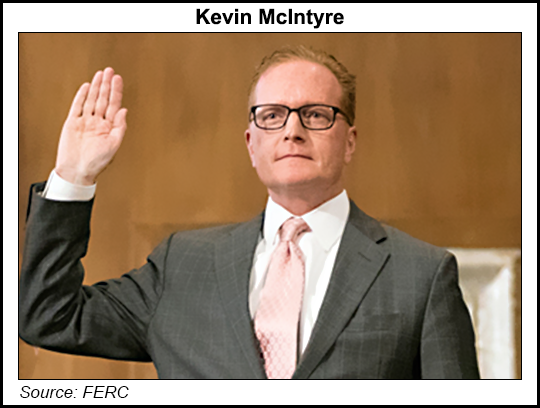 McIntyre, who had been co-head of the global energy practice at Jones Day, was nominated by President Trump to head the Federal Energy Regulatory Commission in 2017. His current term was due to expire June 30, 2023.

“Today is a deeply sad day for the Federal Energy Regulatory Commission and for all those who had the pleasure of knowing Kevin McIntyre both personally and professionally,” said Chairman Neil Chatterjee. “During his tenure at the Commission, Kevin exhibited strong leadership and an unmatched knowledge of energy policy and the rule of law. He exemplified what it means to be a true public servant each and every day, no matter the challenges that lie ahead of him.

“In the face of adversity, Kevin’s dedicated faith, devotion to family and sharp wit never faltered. His unwavering strength was — and will continue to be — an inspiration to us all.”

McIntyre was also mourned by Sen. Lisa Murkowski (R-AK), chairman of the Committee on Energy and Natural Resources.

“As a lawyer, a commissioner, and as FERC’s chairman, he always had the utmost respect for the agency and its mission. He was as warm and engaging as he was knowledgeable about the issues that came before him,” Murkowski said.

McIntyre was diagnosed with a brain tumor in the summer of 2017 and said last March that he had subsequently undergone successful surgery.

He also reportedly suffered a back injury in a gym accident last July. His recovery did not prevent him from initially fulfilling a full schedule, including hearings on Capitol Hill and speaking engagements, at least until September, when he was absent from FERC’s monthly public meeting. He also missed FERC’s October meeting.

In October, saying he had suffered a “serious health setback,” McIntyre stepped down as FERC chairman, but remained a commissioner. President Trump then designated Chatterjee to lead the Commission. Chatterjee also served as acting chairman for four months prior to McIntyre’s December 2017 swearing in at FERC.

The highlight of McIntyre’s 14-month tenure as chairman was FERC’s review and eventual rejection of a controversial proposal by the Department of Energy (DOE) to subsidize the coal and nuclear industries. The Commission was unanimous in its vote to turn away the DOE’s notice of proposed rulemaking, choosing instead to issue an order “to holistically examine the resilience of the bulk power system.”

McIntyre also spearheaded efforts to accelerate FERC’s permitting of interstate natural gas pipelines and liquefied natural gas (LNG) export projects, culminating in the Commission issuing environmental schedules in September for a dozen pending LNG terminal projects. At the same time, FERC signed a memorandum of understanding with the Pipeline and Hazardous Materials Safety Administration to coordinate the siting and safety review of FERC-jurisdictional LNG facilities. Since then, FERC has issued draft environmental impact statements for eight of those projects.

FERC is left with four members — Chatterjee and Bernard McNamee, who are Republicans, and Cheryl LaFleur and Richard Glick, who are Democrats.

That 2-2 Republican-Democrat alignment leaves open “the possibility that policy disagreements could inhibit the ability of the Commission to move forward if it deadlocks on partisan lines,” according to analysts with Washington, DC-based ClearView Energy Partners LLC. “Such partisan divides appear most relevant in the case of Commission approvals for LNG terminals and natural gas pipelines, and potentially on orders that impact the fuel mix of the electric generation sector.”

LaFleur, who served as chairman from July 2014 until April 2015 and as acting chairman on two other occasions, is serving a term due to expire at the end of June. McNamee’s term expires in 2020; Chatterjee’s in 2021; and Glick’s in 2022.