FERC has approved a settlement negotiated between ANR Storage Co. and its customers over storage rates, allowing both sides to avoid the expense of litigation through a rate case. 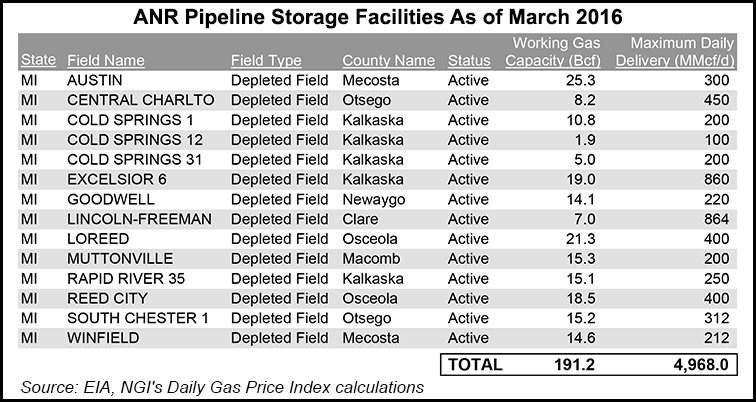 ANR, a unit of TransCanada Corp., launched pre-settlement talks with its shippers earlier this year. Those talks led to an agreement-in-principle. Last June, the company asked the Federal Energy Regulatory Commission [RP16-1030] to approve the settlement in lieu of submitting a general section 4 rate filing under the Natural Gas Act (NGA).

“The settlement will provide an immediate reduction from ANR’s currently effective rates and provides rate stability until 2019,” FERC said in a letter order issued last Thursday. It added that the settlement “appears to be fair and reasonable and in the public interest.” A separate document filed with FERC called the settlement “a delicate compromise among many participants with diverse and often conflicting interests.”

The settlement also calls for the depreciation rate for underground storage to decrease from 3.25% to 2%, and for the adoption of a tariff true-up mechanism for fuel use and lost-and-unaccounted for gas. ANR also pledged to spend at least $29 million on capital expenditures (capex) through the end of 2019, and agreed to meet with its shippers at least once annually between 2017 and 2020 to discuss planned capex for the upcoming year and actual capex from the preceding year.

As part of the settlement, ANR also filed a companion abandonment application to terminate service under its Part 157 Rate Schedule X-1 Agreement. That application calls for ANR Pipeline Co. to be provided with Part 284 open-access service under Rate Schedule FS, in order to place the pipeline company’s contract on comparable terms to other firm agreements.

The aforementioned companies include ANR customers that participated in a previous rate settlement in 2012, which followed a separate FERC investigation (see Daily GPI, Nov. 18, 2011). That agreement required ANR to file a new general rate case under Section 4 of the NGA to be effective no later than July 1 of this year.

ANR’s storage fields are located in Michigan and hold up to 56 Bcf of storage capacity.