Despite indications last month to the contrary (see Daily GPI, Nov. 11), the Obama administration’s goal is to save the threatened sage grouse without listing it as an endangered species, Interior Secretary Sally Jewell told a winter meeting of the Western Governors’ Association (WGA) in Las Vegas Saturday. 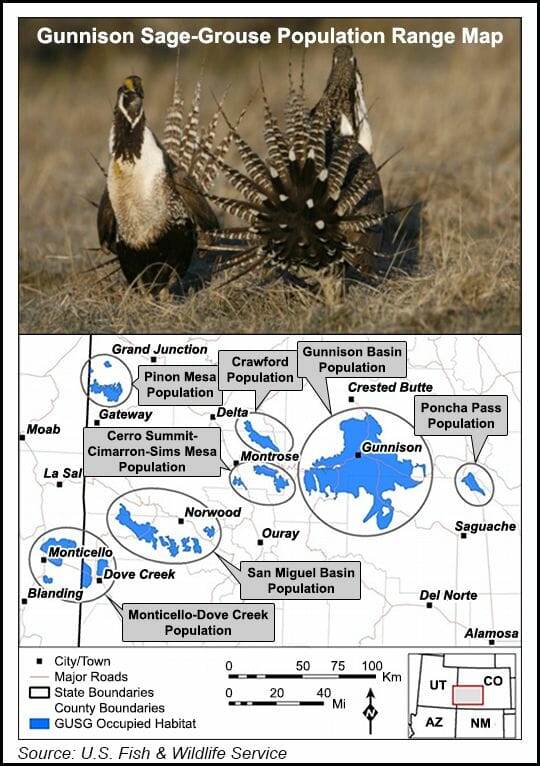 U.S. Fish and Wildlife Services (FWS) has set a September 2015 deadline to decide on a possible listing of the bird and setting aside of protected habitat across parts of 11 western states. The governors in attendance at the WGA meeting are generally against such a move.

“We want to create an environment where a listing is not warranted,” Jewell told the WGA. “We’re in a period of epic collaboration. That’s what is happening for sage grouse across the 11 states. We have incredible momentum so we can’t stop now; we need to get across the finish line.”

In November, the Obama administration declared as threatened under the Endangered Species Act (ESA) the Gunnison sage grouse, kicking off the prospect of likely legal challenges and posing potential problems for oil and natural gas development in parts of Utah and Colorado.

Many of Colorado’s elected officials, including Gov. John Hickenlooper, both U.S. senators from the state and House representatives were critical of the decision. Hickenlooper was one of the governors attending Saturday’s WGA meeting.

Govs. Matt Mead (Wyoming) and Gary Herbert (Utah) expressed concerns about the ESA’s application hindering oil/gas development and agribusiness in their states. Federal officials in attendance indicated a willingness to work with states to make improvements to the ESA.

In another keynote address to the WGA sessions Saturday, U.S. Department of Energy Secretary Ernest Moniz reiterated that the Obama administration supports an “all-of-the-above” energy strategy that includes forms of clean coal and nuclear technology.

“We are committed to an all-of-the-above energy strategy, and our job is to make sure the options are there for our communities and states to make the choices they need to make for a clean energy future,” Moniz told the governors.

In response to a question from Mead on the administration’s attitude toward coal, which still provides nearly 40% of the nation’s electricity, Moniz said that DOE’s objective is “to provide technologies to permit coal use even in a world of lower carbon emissions.”