Federal authorities must apply more scrutiny to potential impacts on greater sage grouse across hundreds of oil and natural gas leases in Wyoming and Montana before authorizing new drilling, a federal judge in Idaho has ruled. 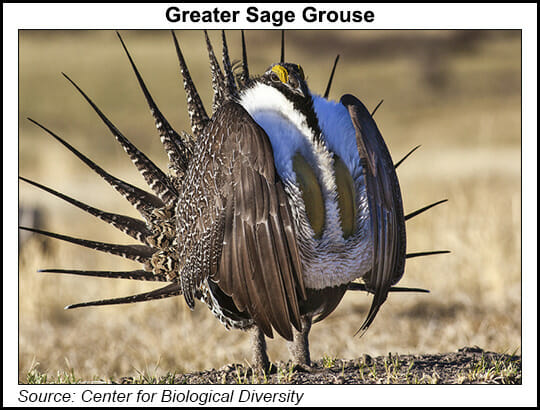 The leases span more than 400,000 acres across the two states that are habitat for greater sage grouse, a ground-dwelling bird whose numbers have dwindled in recent years amid development in the West. Bush cited federal reports that estimate the birds’ population at less than 10% of past peaks, and he said the species occupies only about half its historic range.

At issue: Advocates for the birds say protecting the grouse and its habitat benefits hundreds of other species that depend on the same ecosystem that the birds help to foster. These include pronghorn, elk, mule deer, golden eagles, native trout, and migratory and resident birds. The BLM is responsible for managing more than half of the nation’s remaining sage grouse habitat.

Bush’s order calls for a temporary pause in the lease authorizations, but it directs the BLM to undertake full environmental analyses and consider alternatives, including indefinitely delaying leasing on greater sage grouse habitats.

Under former President Obama, the BLM largely shelved public land lease sales across several states in the West because of concerns that continued development would further erode grouse populations. To keep the birds off the endangered or threatened list per the Endangered Species Act, a broad plan was adopted, with state support, to protect the habitat from development.

Following former President Trump’s inauguration in 2017, the BLM altered that plan, easing some restrictions and rules, including one that prioritized development outside grouse habitat. Lawsuits from environmental and wildlife groups ensued in several states.

The BLM, under President Biden, has not commented on the ongoing litigation. However, environmentalists behind the legal action are pushing for a return to the Obama-era policy, when Biden was vice president.

Western Watersheds Project and Center for Biological Diversity filed the lawsuit against the Department of the Interior.

“Instead of prioritizing oil and gas leasing and development outside designated sage grouse habitats, the Trump administration targeted some of our nation’s most ecologically sensitive public lands…without even considering the consequences,” said Erik Molvar, executive director of Western Watersheds Project. “This ruling sends a very strong message that the BLM can no longer lease public lands for fossil fuel development without weighing the outcomes for sensitive lands and wildlife.”