A federal judge has halted oil and gas development in Ohio’s Wayne National Forest (WNF) after a ruling last year found the Bureau of Land Management (BLM) and the U.S. Forest Service (USFS) failed to adequately consider the impact of unconventional development when they opened the land for drilling. 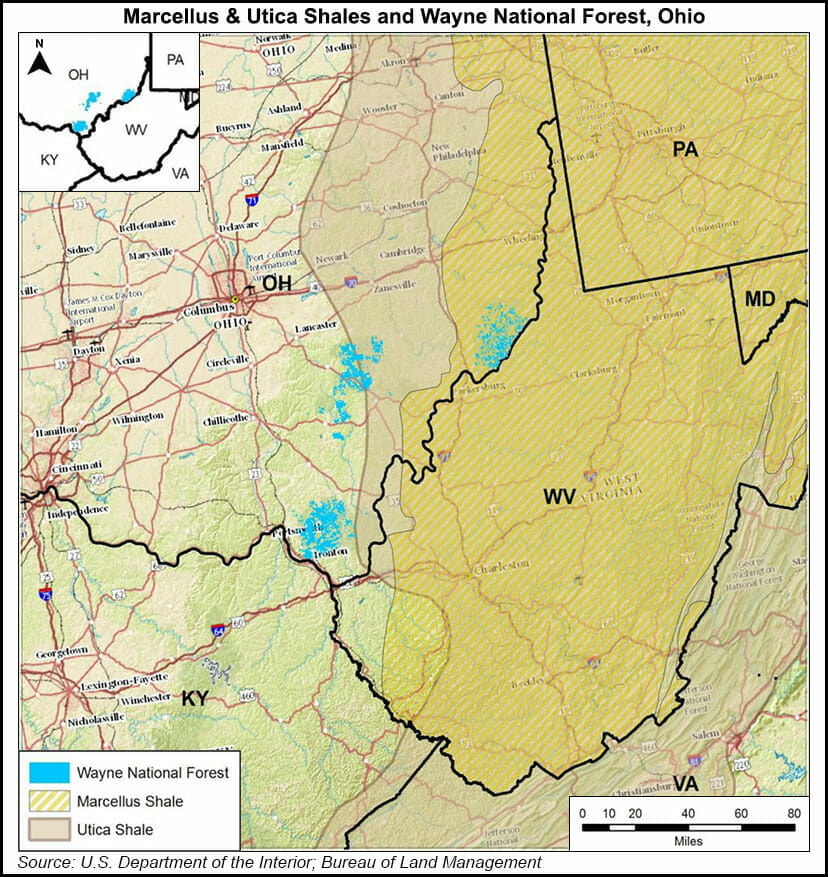 The U.S. District Court for the Southern District of Ohio ordered the agencies to further review their authorizations under the National Environmental Policy Act (NEPA). Pending review, this week’s order blocks new leases in the WNF, prohibits new drilling permits and surface disturbance on existing leases, and prohibits water withdrawals from the Little Muskingum River.

Judge Michael Watson said the USFS and BLM “demonstrated a disregard for the different types of impacts” caused by unconventional development in the forest. He added that “the agencies made decisions premised on a faulty foundation.”

The decision was another flash point in a long-running battle over whether exploration and production companies should be allowed to operate in the WNF, the state’s only national forest. Last year’s decision threw the future of WNF leasing into doubt when the case proceeded to determine if lease sales should be voided.

Four environmental groups, led by the Center for Biological Diversity, filed a lawsuit against BLM and USFS in 2017 to void oil and gas leases and stop unconventional development in the forest.

The court acknowledged this week, however, that the federal agencies did not completely abandon their duties under NEPA and indicated that remanding the environmental review would likely remedy the case.

The court also noted that it has given particular consideration to the economic implications of its decisions. Intervenor Eclipse Resources Corp., which holds the bulk of WNF leases, has said it would take a loss of more than $41 million in exploration investments if lease sales were voided. Eclipse merged with Blue Ridge Mountain Resources Inc. in 2019 to form Montage Resources Corp., which was ultimately acquired by Southwestern Energy Co. last year.

“Eclipse avers that it has taken steps, including partially drilling two wells and commenced well-site construction activities for eight other wells, such that a mere refund of its lease purchase would be insufficient,” Watson wrote in his opinion this week.

Eclipse argued that the court must consider potential losses of private landowners near WNF too. The company also noted that vacating lease sales, returning funds and rescinding permit applications would require it to go through a lengthy and complicated administrative process.

This week’s order comes as the Biden administration has paused federal oil and gas leasing on federal lands and offshore waters pending a climate review of federal fossil fuel programs.

“This is a victory for public health, for outdoor recreation and for our climate. The court’s ruling means that, at least for the foreseeable future, a significant portion of the Wayne National Forest will be safe from oil and gas development,” said Ohio Environmental Council’s Nathan Johnson, public lands director.

Ohio Oil and Gas Association spokesperson Mike Chadsey said the case, combined with the Biden administration’s move to pause leasing on federal lands, has created an uphill battle for development on the WNF properties, particularly given opportunities on private land elsewhere in southeastern Ohio.

There are about 1,200 conventional wells in the forest, but little unconventional development given the legal and regulatory uncertainty that has overshadowed the assets, Chadsey told NGI’s Shale Daily.

At “first blush,” Chadsey said the court’s order this week remanding the agencies’ drilling authorizations for further environmental review could ultimately resolve the case. He added that private landowners with properties bordering federal land in the forest that are in favor of oil and gas development could ultimately move ahead with legal challenges if activity is halted.