Natural gas futures traders must think fireworks are an overrated way to ring in the new year, as the only sparks on Thursday were those resulting from prices slamming the pavement. The February Nymex futures contract dropped 28.9 cents to settle at $3.561/MMBtu in its debut at the front of the curve. March tumbled 26.1 cents to $3.435. 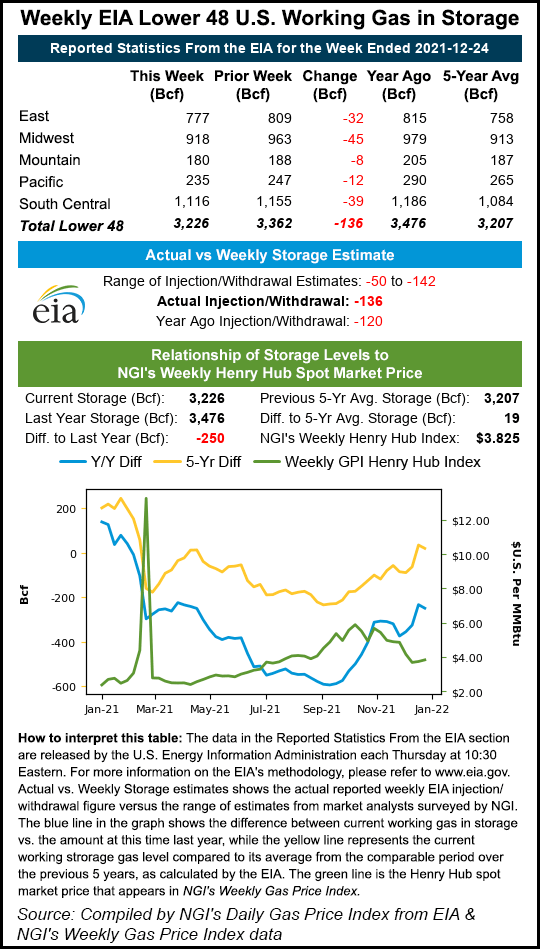 Spot gas, which traded Thursday for gas delivery Saturday through Monday, staged a major rally, though. With frigid air seen sliding deep into the United States and lingering through the early part of the week, NGI’s Spot Gas National Avg. jumped 50.0 cents to $4.360.

Weather models continued to show cold weather for the next couple of weeks and in fact, added demand from next Wednesday (Jan. 5) through the Jan. 10 period in the overnight runs, according to NatGasWeather. However, the European Centre (EC) data also showed a very warm pattern sweeping across almost the entire United States Jan. 12-14.

“This makes it difficult to determine how the natural gas markets will interpret overnight trends since the EC still forecasts two strong bouts of frigid air sweeping across the northern and central U.S. Jan. 2-3 and Jan. 6-8,” NatGasWeather said. The forecaster acknowledged, however, that the model also now favored a warmer/bearish pattern setting up at the end of the run for Jan. 12-14.

“If the EC model were to trend colder Jan. 12-14, it would go a long way in making the coming 15-day pattern much more intimidating/bullish since Jan. 2-10 is currently cold enough,” NatGasWeather said.

Hope for a continuation of the frosty conditions waned further after the Global Forecast System also trended warmer for the Jan. 9-14 period. It shed eight heating degree days from the 15-day forecast.

Not even the latest government inventory data, which continued to show tightness in the supply/demand balance, could stop the bleeding in futures.

The Energy Information Administration (EIA) reported a 136 Bcf withdrawal from storage inventories for the week ending Dec. 24, well within a wide range of expectations.

Participants on The Desk’s online energy chat Enelyst said the latest EIA figure reflected continued tightness in the market, but the market still faces too many bearish factors to justify higher prices.

“Profit taken, risk off, weather still not showing signs of a polar vortex, production keeps growing – there are tons of bearish fundy and positional reasons,” said one analyst.

Another added, “The reality is storage and supply-demand fundamentals do not justify anything above $3.50, and I am pushing it. What’s disappointing is that there were expectations that the old regime of reckless production was a thing of the past, but crude oil supply curtailments have created prices providing ample room for associated gas gains going forward, which could be very bearish.”

Surveys ahead of the EIA report showed a wide range of expectations, making it difficult to pinpoint a consensus. A Bloomberg survey had a range of withdrawal estimates from 116 Bcf to 166 Bcf, with a median draw of 136 Bcf. A larger Wall Street Journal survey produced estimates from 66 Bcf to 128 Bcf, with an average draw of 114 Bcf. A Reuters poll produced a median pull of 126 Bcf, while NGI modeled a 142 Bcf withdrawal.

EIA recorded a 120 Bcf draw in the year-earlier period, and the five-year average is a pull of 121 Bcf.

Broken down by region, the Midwest led with a 45 Bcf withdrawal and the South Central followed with a 39 Bcf pull, according to EIA. This included a 30 Bcf pull from nonsalt facilities and an 8 Bcf draw from salts.

Elsewhere around the country, East stocks fell by 32 Bcf and Pacific stocks slipped 12 Bcf. Mountain inventories were down 8 Bcf for the week, EIA said.

Total working gas in storage as of Dec. 24 stood at 3,226 Bcf, which is 250 Bcf below year-ago levels and 19 Bcf above the five-year average, according to EIA.

As for what lies ahead, Mobius Risk Group said in addition to the January weather pattern, traders also could face some interesting inventory data in the next round of EIA data. The firm pointed out that there is a high likelihood of a considerable salt storage build in the reference week ending Dec. 31. Unseasonably warm temperatures in the southern tier of the country make this likelihood understandable, yet such a storage change in this asset class to end the year is a challenging data point to overcome.

For reference, the salt storage build is set to climb above 10 Bcf in the next EIA report. “This would compare to the same week last year when salts withdrew 1 Bcf,” Mobius said.

Spot gas prices rallied to end the week, with stout gains in the typical regions like the pipeline-constrained Northeast and also some hefty increases in the Lone Star State, which was set to see its first freeze.

Temperatures were set to plunge to freezing levels in the coming days, a stark contrast to the high humidity and record highs that blanketed Texas during the final week of 2021.

Power loads were set to soar to more than 58,000 MW early Monday, up from a projected peak of about 43,000 MW on Thursday, according to the state’s electric grid operator.

The Electric Reliability Council of Texas said Friday the power grid is “winterized and ready to provide power,” with on-site inspections of mandatory winterization efforts completed. Inspections were completed at more than 300 electric generation units and 22 transmission station facilities.Elsewhere across the country, Henry Hub cash was up 32.0 cents to $3.720, and Ventura was up $1.085 to $4.900. Other notable gains were seen in the Northeast, where Transco Zone 6 NY soared $1.040 to average $3.535.