Natural gas prices hovered in a narrow range early Thursday but spiked after a bullish government inventory report and customary buying into prompt-month expiration. The February Nymex gas futures contract settled at $6.265/MMBtu, up $1.988 day/day. It rolled off the books at the close. March, which takes over as the front month, climbed 24.7 cents to $4.283. 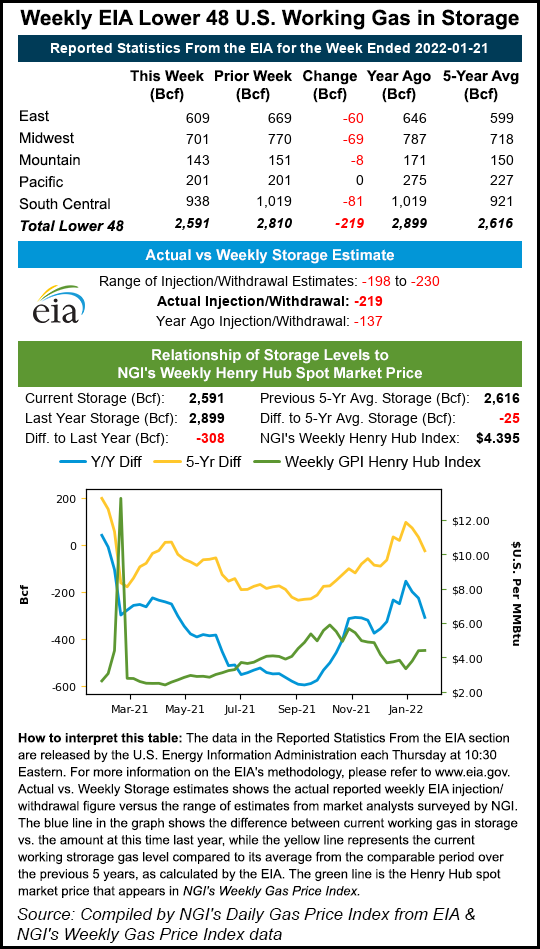 NGI’s Spot Gas National Avg. gained 6.0 cents to $6.315. A winter storm was on track to smother parts of the East Coast over the weekend, potentially delivering damaging winds and snow that could cause power outages from New York City to Boston.

While outlooks into mid-February were evolving as of Thursday and fluctuating between a warm-up and extended cold into next month, the near-term forecast called for a pair of cold blasts that should keep furnaces cranking into early February, NatGasWeather said.

A Nor’easter-type system “will track up the East Coast Saturday-Sunday with rain, snow and wind,” the firm said. “National demand is still expected to ease early next week” from Tuesday through Thursday (Feb. 1-3), “as a mild break sets up over the southern and eastern U.S.” with highs from the 40s to 70s. However, “another frigid system is expected into the northern and central U.S.,” beginning next Friday (Feb 4-7)  for another round of strong national demand.”

EBW Analytics Group’s Eli Rubin, senior analyst, said while forecasts beyond that are uncertain, “the theme of this winter has been durable weather patterns lasting for longer than initially forecast, including both strong early-winter warmth and the current long-lasting cold spell. From a market perspective, the protracted current cold throughout the heart of winter has steadily reduced late-winter downside risks.”

He also noted that futures have tended to jump higher just before prompt month expiry.

“Natural gas contracts rolling off the board have gained an average 12.1 cents in 12 of the past 14 months on their final trading day,” Rubin said. “While support for March may relent seasonally absent a true storage adequacy threat, a falling end-of-winter storage trajectory has limited the extent of likely declines over the next month.”

Indeed, the U.S. Energy Information Administration (EIA) on Thursday reported a withdrawal of 219 Bcf natural gas from storage for the week ended Jan. 21. It marked the biggest pull of the winter season to date and easily eclipsed historical averages. It also exceeded market expectations.

The pull flipped inventories from a surplus of 33 Bcf relative to the five-year average to a deficit of 25 Bcf.

Last year, EIA recorded a 137 Bcf withdrawal from storage in the similar week, while the five-year average draw is 161 Bcf. Prior to the print, survey results had coalesced around 215 Bcf.

Production hovered below 94 Bcf during the covered week – about 3 Bcf lower than late 2021 highs — because of weather-induced freeze-offs. Output remained below 94 Bcf on Thursday, according to a Bloomberg estimate.

The print for last week was “a strong number in terms of the supply/demand balance, thanks to production declines keeping supply lower, something we appear stuck with,” while freezing temperatures persist, Bespoke Weather Services said.

By region, the South Central decrease of 81 Bcf led all others. The Midwest and East regions followed with pulls of 69 Bcf and 60 Bcf, respectively, according to EIA.

Looking ahead, Bespoke expects strong withdrawals over the next three weeks, given the recent light production and rash of wintry weather. It is targeting a draw of 275 Bcf for the next EIA print.

Participants on The Desk’s online energy platform Enelyst were also bullish. “I’m expecting the next three reports to be 200-plus,” pointing to five consecutive reports above 200 Bcf, Enelyst managing director Het Shah said.

“I’m at minus 257 for next week,” Shah said, adding that estimate could be revised higher.

Spot gas prices advanced across most of the Lower 48 Thursday, led higher by spikes in the volatile Northeast ahead of the anticipated weekend storm.

NatGasWeather said the latest bout of winter weather expected this weekend would track out of the Plains and across the east-central and eastern United States over the next several days. Lows were forecast to range from below zero to the 20s over the Great Lakes, Ohio Valley and Northeast. The firm predicted chilly conditions over the South and Southeast as well, with lows dropping into the teens in some markets to “aid strong national demand.”

Against that backdrop, next-day prices climbed throughout the nation’s midsection and East.

Looking to next week, Maxar’s Weather Desk’s Steve Silver, a senior meteorologist, said the forecast calls for cold air to linger across the eastern third of the country early behind the “potent Nor’easter.”

Farther out, however, Silver said the 11- to 15- day period features above-normal temperatures across the north-central United States and in California, while “marginally below-normal temps visit areas of the South and eastern Midwest.”

However, he added, confidence “has decreased as models have diverged” in recent forecasts.