MDU Resources Group CEO Dave Goodin is still looking for the “beef” in a proposed $650 million natural gas transmission pipeline project from the Williston Basin in western North Dakota to multiple interconnections in the northwest corner of Minnesota. An open season for the 400 MMcf/d project has been ongoing since the end of January. 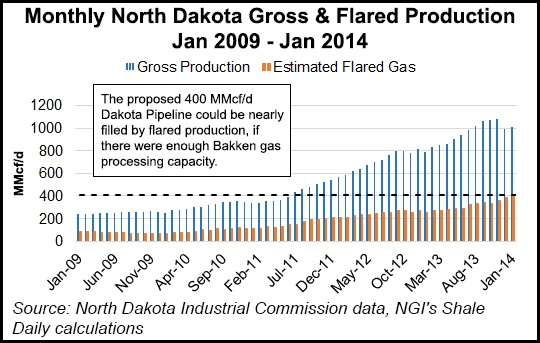 But Goodin said last Friday at the Howard Weil Energy Conference in New Orleans that MDU is still looking for binding agreements from the open season process. In an interview with Reuters after this presentation, Goodin would not say how much interest, if any, the prospective customer process has garnered.

“Dave didn’t specify how many binding commitments we might have for the pipeline; for competitive reasons, that is a subject we wouldn’t address during an open season,” a Bismarck, ND-based MDU spokesperson told NGI‘s Shale Daily on Tuesday. “The open season will come to a conclusion at the end of May, and at some point following that, we will make a decision about whether to proceed with the project.”

By the time the open season ends, Goodin said MDU hopes the project is oversubscribed, given that the lack of pipeline takeaway capacity in the Bakken currently results in more than 30% of the associated gas produced in North Dakota being flared or vented (see Shale Daily, March 24).

According to data from the North Dakota Industrial Commission, the proposed 400 MMcf/d pipeline could be nearly filled by flared production, if there were enough Bakken gas processing capacity available.

A unit of the energy holding company, WBI Energy Inc., is completing the second month of the open season for a proposed 375-mile transmission pipeline connecting plentiful Bakken Shale supplies to markets in the Great Lakes (see Shale Daily, Jan. 31).

Binding capacity commitments for firm transportation rights are being sought with the targeted in-service date for the 24-inch diameter pipeline being Nov. 1, 2017. All precedent agreements must be completed within 30 days following the close of the open season unless WBI agrees to extend that deadline.

Goodin said at the Weil conference that MDU will decide shortly after the open season whether to proceed with the project. Permitting is expected to take up to two years and construction six to 12 months, the company has said.

With rapidly growing gas production in western North Dakota, demand across all of the major markets has picked up in the Great Lakes states of Minnesota, Wisconsin and Michigan as well as broader Midwest markets, MDU said when it launched the open season.

Although it has gas and electric utility operations spread among several subsidiary companies and states, MDU has put a lot of emphasis on investment in its headquarters state of North Dakota, driven by all of the energy and infrastructure needs created with the shale boom in the Bakken.

It hopes to open the state’s first refinery since 1976 later this year with its 50-50 partnership with Calumet Specialty Products Partners LP. They are building Dakota Prairie Refinery, a $350 million facility geared to turn out 20,000 b/d to fill some of the gap between in-state capacity and a growing thirst for diesel driven by both the agriculture and oil/gas industries

“A significant part of the refinery’s diesel market is found in the state’s agricultural industry,” the MDU spokesperson said. “North Dakota harvested nearly 20 million acres of crops last year, fourth-highest in the United States; we’re the nation’s leading producer of 13 commodities. Even without the oil boom, this agricultural diesel market is under-supplied.”

Statewide diesel consumption is about 65,000 b/d, and current in-state capacity from Tesoro Corp.’s Mandan plant near Bismarck is 22,000 b/d. The rest of the supply has to be imported, ironically, into the nation’s second largest oil-producing state.

Goodin said the refinery project is on schedule to open by December.