ExxonMobil on Wednesday sanctioned a $240 million-plus investment to improve its Baton Rouge, LA, refinery operations, which include installing technology to reduce emissions. 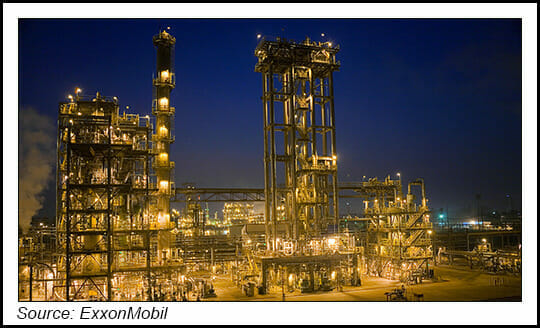 Project construction is expected to begin later this year at the refinery, which has crude capacity of about 517,000 b/d.

“Through this investment, we will reduce the facility’s volatile organic compound emissions up to 10%, while bringing direct value to the community through increased tax revenue and job opportunities for local residents and small and diverse businesses,” said ExxonMobil’s David Oldreive, Baton Rouge refinery manager.

“ExxonMobil has made significant progress to reduce emissions globally and plans further reductions in greenhouse gas emissions by 2025.”

The petrochemical and refining facility initially was opened in 1909 by predecessor Standard Oil Co. It has since become a world-scale, integrated complex that manufactures nearly 300 products and grades of products, including motor gasoline, diesel, aviation gasoline, lubricating oils, waxes and petroleum coke.

The Baton Rouge refinery has, for more than a century, “fueled the economy of our state and nation,” Gov. John Bel Edwards said. “These latest capital upgrades will continue to position the integrated ExxonMobil refinery and chemical complex here in Baton Rouge as one of the world’s most innovative and competitive energy sites.”

According to ExxonMobil, the refinery in 2019 had an estimated $235 million payroll. It also paid $23 million in property taxes, and purchases were estimated at about $494 million.

The new projects could help to retain 1,300 existing jobs, the supermajor noted. ExxonMobil also estimated that the work could create as many as 600-plus construction jobs on site over three years.

In addition, the investment is likely to provide at least 20 full-time job opportunities for graduates of the North Baton Rouge Industrial Training Initiative, a collaborative program spearheaded by ExxonMobil in 2012 to provide no-cost, fast-tracked industrial craft training for community residents.

Direct, indirect and induced jobs resulting from project construction are forecast to total 2,030 in Baton Rouge by 2023. The data compiled by the Kathleen Babineaux Blanco Public Policy Center at the University of Louisiana at Lafayette also said direct property tax revenue is projected to reach $43 million over the life of the project.

“ExxonMobil is an economic driver in East Baton Rouge, supporting thousands of residents with quality jobs, strategically partnering with local companies for procurement needs, and injecting millions of dollars into public services,” Mayor-President Sharon Weston Broome said. The investment should “bolster employment, contribute to our tax base and reinvigorate local businesses.”