ExxonMobil is looking for local, state and federal support to build a $100 billion project that would capture carbon emissions from the largest U.S. petrochemical complex along the Houston Ship Channel and bury them in the Gulf of Mexico. 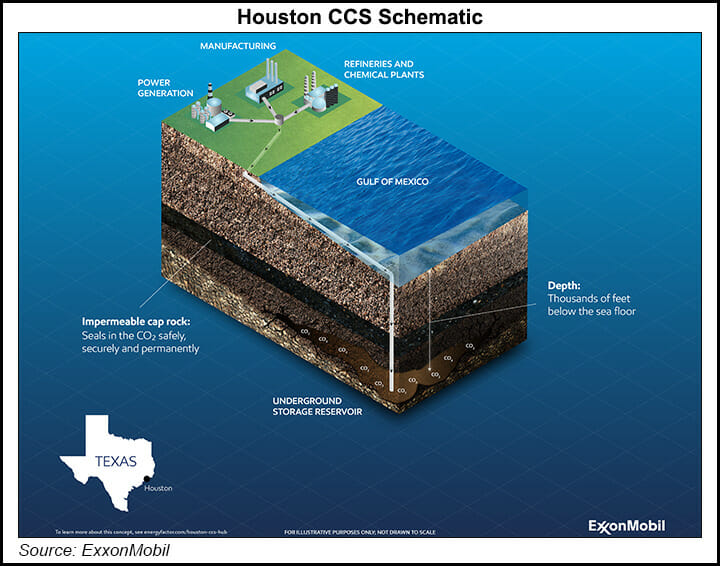 If the landmark project were to be built, ExxonMobil estimates that by 2030 the initial phase of the carbon capture and sequestration (CCS) project could capture 50 million metric tons/year (mmty) of carbon dioxide (CO2) from the mega refineries, chemical and manufacturing facilities along the Houston Ship Channel (HSC).

The captured emissions, equivalent to taking nearly 11 million vehicles off the road, would be stored up to 6,000 feet below the Gulf of Mexico.

“ExxonMobil believes the United States could establish a CCS Innovation Zone along the HSC and surrounding industrial areas with the potential to effectively capture all the CO2 emissions from the petrochemical, manufacturing and power generation facilities located there,” said ExxonMobil Low Carbon Solutions President Joe Blommaert. “The CO2 would be piped into natural geologic formations thousands of feet under the sea floor.”

CCS, he noted in a blog post, “will need to play a critical role if the United States and other countries are to meet the emissions-reduction goals outlined” in the 2015 United Nations climate accord, aka the Paris Agreement.

The huge project would need “the collective support of industry and government, with a combined estimated investment of $100 billion or more,” Blommaert said. “But the benefits could be equally big: Early projections indicate that if the appropriate policies were in place, infrastructure could be built in Houston to safely capture and permanently store about 50 mmty of CO2 by 2030. By 2040, it could be 100 mmt.”

CEO Darren Woods in March said ExxonMobil was looking to tame carbon emissions and make it as big a priority in future operations as its oil and gas businesses. ExxonMobil plans to invest $3 billion over the next five years to reduce its carbon emissions. Recently launched ExxonMobil Low Carbon Solutions is evaluating around 20 CCS projects globally, from Texas to Qatar.

To bring the Houston-area CCS project to fruition, ExxonMobil is looking for the “whole of government” approach championed by the Biden administration, Blommaert said.

A CCS project of the magnitude proposed “will need business support from across industries and community support. It will need government and private-sector funding, as well as enhanced regulatory and legal frameworks that enable investment and innovation…
We believe the time is right for a large-scale collaboration in the United States between government at every level, private industry, academia and local communities to create an ‘Innovation Zone’ approach to dramatically accelerate CCS progress,” Blommaert said. “And we think Houston is the perfect place for such a concept.”

The Bayou City has two features making it an “ideal” candidate for CCS. “It has many large industrial emission sources, and it’s located near geologic formations in the Gulf of Mexico that could store large amounts of CO2 safely, securely and permanently.”
Based on 2018 data, the U.S. Department of Energy estimated that storage capacity along the Gulf Coast is enough to hold 500 billion mt of CO2, or “more than 130 years of the country’s total industrial and power generation emissions,” Blommaert noted.

“As the ‘Energy Capital of the World,’ Houston is already the home to all kinds of energy innovation,” and “home to more than 12,000 ExxonMobil employees, including myself,” Blommaert said. “ExxonMobil is uniquely positioned to help advance this Houston CCS Innovation Zone concept.”

ExxonMobil’s concept “could be a game-changer” for deploying CCS to benefit Houston in its ambitions to be carbon-neutral by 2050, he noted. The CCS endeavor would offer other benefits as well.

“In addition to having the potential to effectively decarbonize one of the country’s largest sources of industrial emissions, the concept could generate tens of thousands of new jobs and protect thousands of existing jobs. Importantly, CCS also promises the potential of significant impact at lower societal costs compared to other emissions reduction technologies, especially for the manufacturing sector.”

Once completed, ExxonMobil envisions duplicating the Houston CCS Innovation Zone in areas where there are similar concentrations of industrial facilities near suitable CO2 storage sites, including the Midwest and elsewhere along the Gulf Coast.

ExxonMobil, which estimates CCS could be a $2 trillion market by 2040, is focusing its research and development on “hard to decarbonize sectors of the economy,” which are responsible for around 80% of energy emissions, Woods said. Those include commercial transportation, power generation and heavy industry.

With an equity share in about 20% of global CO2 capture capacity, ExxonMobil has captured about 40% “of all the captured anthropogenic CO2 in the world.” Most of the carbon captured has been at its Shute natural gas processing plant in Lincoln County, WY, which is used or sold for enhanced oil recovery operations.

To store CO2, ExxonMobil for the past three years has been assessing multi-user CCS “hubs” sited in industrial areas near geologic storage sites such as depleted oil and gas reservoirs.

The Oil and Gas Climate Initiative, of which ExxonMobil is a member, in 2019 set a goal to decarbonize industrial hubs to reduce methane emissions. As a member of the Business Roundtable, ExxonMobil also has pushed for a U.S. carbon tax.