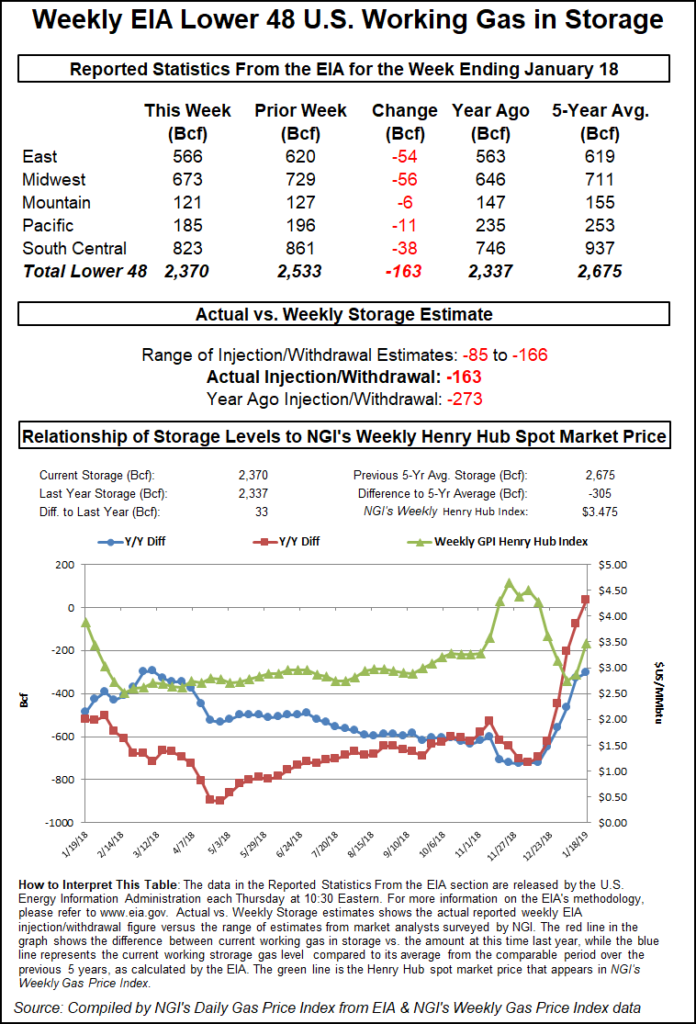 February Nymex futures settled 11.9 cents higher at $3.099 Thursday, trending higher through the day after gaining overnight. That’s in contrast to Wednesday’s session, when early gains failed to stick as prices ultimately settled lower on the day. Further along the strip, March settled 7.6 cents higher at $2.998 Thursday, while April added 5.4 cents to settle at $2.844.

The latest guidance Thursday continued to show a “dangerously cold polar blast” hitting the Lower 48 starting early next week and continuing through Feb. 2, according to NatGasWeather. The forecaster attributed Thursday’s rally to a combination of markets pricing in next week’s extreme cold and Global Forecast System data trending colder for the northern United States Feb. 4-8, adding nearly 20 heating degree days to the outlook compared to Wednesday’s runs.

“The pattern would be exceptionally bullish if not for the weather data favoring the polar cold pool retreating back into southern Canada Feb. 5-8,” NatGasWeather said. However, recent model runs “show ways cold can sneakily push back across the border, as we cautioned could easily happen.”

The forecast warm-up in the first week of February that drove selling earlier in the week has since added back cold and raised heating demand expectations, and guidance has raised doubts about “how much warming will actually occur Feb. 4-10, although the data still says it should be at least a modest warm-up,” according to the forecaster.

The 163 Bcf withdrawal, recorded for the week ended Jan. 18, falls on the bullish side of major surveys but is bearish versus the five-year average 185 Bcf pull and the 273 Bcf withdrawal EIA recorded in the year-ago period

“February gas prices are not particularly impressed with this number, but with cold weather only confined to the East on the week and a large draw both in the Midwest and in the South Central we see this print as indicating significant upside risk on any return of colder weather into the middle of February,” Bespoke Weather Services said.

“With a colder February our end-of-draw expectations have dipped below 1.2 Tcf and can fall further if forecasts cool more than expected; we of course need cold risks on model guidance to rally, but we expect those to build over the coming week and support prices.”

Thanks to the polar vortex dropping southward, the Lower 48 can expect some truly bone-chilling, potentially record-setting and possibly even life-threatening cold next week, according to forecasters.

The Midwest could see the coldest weather in over a decade, potentially colder than even the 2014 polar vortex event, according to Radiant Solutions. The forecaster said an Arctic air mass is expected to settle into the region and break daily temperature records, with potentially life-threatening wind-chill levels.

Forecasts as of Thursday showed lows in Chicago dropping to negative 18 degrees on Jan. 31, which would be the coldest temperatures there since 2009, Radiant said. The forecast high of negative 5 degrees on Jan. 30 would be the coldest daily high temperature since 1996. Other cities across the Plains and Midwest could see lows in the negative 20s and 30s, with wind chill potentially in the negative 50s in Minnesota.

“The upcoming chill is expected to reach or exceed levels from the 2014 polar vortex intrusion in much of the Midwest,” Radiant’s Steve Silver, senior meteorologist, said. “We expect the cold to set records in the Upper Midwest, and some models suggest that there still may be room for the forecast to trend additionally colder.”

Temperatures aren’t expected to be as intense in the East during this period but should still drop to very cold levels, including lows in the single digits from Boston to New York City and lows in the teens as far south as Atlanta, according to Radiant.

While temperatures next week could break records, conditions over the next few days are looking plenty cold in the Midwest, where spot prices strengthened Thursday. Joliet climbed 16.0 cents to $3.195, while Emerson averaged $3.100, up 3.5 cents.

“Over the northern Plains and upper Midwest, the next surge of Arctic air from central Canada has arrived,” the National Weather Service (NWS) said Thursday. “A clipper low pressure system developing along an Arctic front is bringing a brief period of snow squalls across the Great Lakes. The snow is expected to linger into Friday over the lake-effect snow belts.

“Arctic air is forecast to remain over the upper Midwest into the weekend, where temperatures of more than 20 degrees below normal, as well as dangerous wind chills between minus 10 and minus 30 can be expected.”

Prices surged throughout the Northeast as a cold front was expected to move in following mild conditions in the East Thursday. In New England, Algonquin Citygate spiked $5.060 to $8.585, while further south Transco Zone 6 NY jumped $1.520 to $4.495.

“A stream of mild air from the south has quickly brought above normal temperatures up the East Coast and into New England ahead of an active cold front,” the NWS said. A “wide swath” of rain was expected to move out of the Mid-Atlantic and Northeast Thursday night. “Cold air behind the front is expected to change the rain to a period of snow as it spreads up the spine of the Appalachians and across interior New England overnight.”

EPNG followed up with an OFO Thursday due to the weather-related supply issues. The operator said the Washington Ranch storage facility was operating on maximum operational withdrawal.